David R. Heffelfinger's Java EE 7 with GlassFish 4 Application Server has been published by Packt Publishing. The subtitle of this book is "A practical guide to install and configure the GlassFish 4 application server and develop Java EE 7 applications to be deployed to this server." 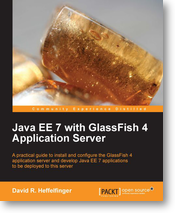 The Preface of Java EE 7 with GlassFish 4 Application Server states that JDK 7 (or newer), GlassFish 4.0, andMaven are needed to build and run the examples in this book. The Preface also expects that readers are expected to have "familiarity with the Java language" and that the book is intended for Java developers wanting to learn Java EE or current Java EE developers wanting to learn about the newest specification.

Chapter 1: Getting Started with GlassFish

Chapter 1 lists two of the primary advantages of using GlassFish as a Java EE application server: it being the reference implementation and, as such, it providing implementations of the latest and newest Java EE features. There is no mention of what I perceive to be GlassFish 4's biggest disadvantage: Oracle has declined to provide commercial support for GlassFish 4.

The initial chapter demonstrates how to download GlassFish 4 and mentions that it is also available bundled with NetBeans IDE ("Java EE" or "All" bundles) since version 7.4. The chapter shows the basics of installing the downloaded GlassFish and assumes that JDK 1.7 or later (note there have been rumors of GlassFish 4 not working well on JDK 8 yet) has been installed and that the Java application launcher is available from the environment's path.

Starting GlassFish from the command-line using the well-known (to previous users of GlassFish) asadmin start-domain command is demonstrated in Chapter 1. The chapter shows bringing up a web browser with the URLhttp://localhost:8080 to verify that GlassFish is running and then demonstrates using the web-based administrative console at URL http://localhost:4848 to deploy a WAR (simpleapp.war) provided on the book's Packt Publishing site. This chapter also demonstrates using the web-based Administrative Console toundeploy the web application as well before demonstrating two ways to deploy the WAR from the command line (by copying the WAR into the autodeploy directory and by using the asadmin deploy command).

Chapter 1 introduces GlassFish domains as a concept and then explains how to work with them using appropriate asadmin domain commands create-domain, delete-domain, and stop-domain.

This meaty first chapter concludes with a demonstration of how to configure GlassFish to use a JDBC driver for working with a relational database. The example specifically demonstrates configuration of a MySQL database driver and datasource, but the author points out that the examples in the rest of the book that work with relational databases use the Apache Derby-based JavaDB that comes bundled with GlassFish.

Nothing in this first chapter on downloading, installing, deploying to, and configuring a data source for GlassFish seems different to me from previous versions of GlassFish. I believe that experienced GlassFish users who are reading Java EE 7 with GlassFish 4 Application Server to learn the new Java EE 7 features and new GlassFish 4 features could skip most of the introductory chapter with the exception of the section providing concisely worded high-level overviews of the new Java EE 7 features. For readers entirely new to GlassFish, this chapter provides a nice starting point for everything you need to do to get GlassFish up and running for use with examples later in the book.

The second chapter of Java EE 7 with GlassFish 4 Application Server focuses on JavaServer Faces (JSF), which it describes as "the standard component framework of the Java EE platform." This chapter's coverage includes discussion of Facelets as now (as of Java EE 6/JSF 2.0) JSF's "preferred view technology." The chapter describes how adhering to JSF's expected conventions can lead to minimal required configuration.

After Chapter 2 covers customization of message styles and text, it moves onto a section called "Ajax-enabling JSF applications." This section points out that "JSF 2.0 standardized Ajax support by introducing the <f:ajax> tag" and then provides an example of using that new tag. There is thorough coverage of the Ajax tag, how it works, and what its other options are.

The parts of JSF 2.2 that interest me most and which I looked forward most to reading about in this book are JSF 2.2's HTML5 support and JSF 2.2's Faces Flows. Both subjects are covered well in this chapter with examples and descriptions of those examples.

The fourth chapter's focus is Enterprise JavaBeans (EJB), which are introduced as "server side components that encapsulate business logic of an application" and "simplify application development by automatically managing transaction management and security." Two types of EJBs (session beans and message-driven beans) are discussed. Although not necessary anymore, it was interesting (or a walk down memory lane) to read the historical information about how session and entity beans have changed since the days of J2EE.

The examples and discussions regarding Session Enterprise JavaBeans include invocation of these deployed beans from a standalone client using appclient and from a web client using JSF and CDI. The examples also involve JPA, making them very inclusive of the significant Java EE specifications.

This fourth chapter covers several other EJB topics include security, the Timer Service, transactions, and the EJB lifecycle. None of these concepts are new to Java EE 7, but EJBs are of course a significant part of many Java EE applications.

The sixth chapter states that "JSON-P includes two APIs for processing JSON - the Model API and the Streaming API" and covers generating JSON and parsing JSON with each of these two APIs. The examples include code and text descriptions as well as brief descriptions of the advantages and disadvantages of JSON Model API versus JSON Streaming API.

This is one of the chapters of Java EE 7 with GlassFish 4 Application Server that includes GlassFish-specific coverage within the topic of a general Java EE 7 specification. In this case, the chapter indicates how to configure GlassFish to use JMS by setting up "a JMS Connection Factory, a message queue, and a message topic." Like Chapter 4 on EJBs, this chapter on JMS also demonstrates using the GlassFish-specific applclient.

The ninth chapter of Java EE 7 with GlassFish 4 Application Server is on securing Java EE applications with Java Authentication and Authorization Service (JAAS) API and GlassFish. The chapter describes using security realmsand covers both preconfigured realms (file, admin-realm, and certificate) and "defining additional realms" (with examples including an LDAP realm, a JDBC realm, and custom realms).

Chapter 11 introduces REST and covers basic support for REST-based web services that was added with Java EE 6. This discussion covers basic JAX-RS annotations, using GlassFish logs to analyze working functionality, usingcurl as a client, and using JAXB for Java/XML binding. The chapter then moves onto discussion of Java EE 7's introduction of "a standard client-side API that we can use to easily develop RESTful web service clients." The chapter concludes with a discussion on query parameters and path parameters (@QueryParam and@PathParam).

Java EE 7 with GlassFish 4 Application Server provides a polished presentation of Java EE as it stands today with its recently included Java EE 7 specifications. GlassFish 4 is the application server used to demonstrate these Java EE concepts.