Packt Publishing recently published 's Osama Oransa's Java EE 7 Performance Tuning and Optimization. This post is my review of this book of twelve chapters and approximately 430 pages of substantive content. 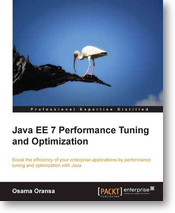 The Preface of Java EE 7 Performance Tuning and Optimization provides brief summaries of all 12 chapters. The Preface also lists the main tools used throughout the book: JDK 7 Update 45, NetBeans 7.4, GlassFish 4.0,MySQL 5.5, Eclipse with Eclipse Test   Performance Tools Platform Project, Apache JMeter 2.10, and JProfiler 8. The Preface states that Java EE 7 Performance Tuning and Optimization is a "strong entry point for the persons without any performance tuning experience" and that the book is for "experienced Java developers, architects, team leaders, consultants, support engineers, and all people working in the performance tuning in the Java applications, and particularly in Java Enterprise applications."

Chapter 1: Getting Started with Performance Tuning

Chapter 1 spends several pages discussing high-level "soft skills" one needs as a leader of a performance tuning team and the very-high-level approach used to narrow down causes of performance issues. There are several other high-level discussions covered in this chapter such as descriptions of the different common architectures and the different application layers to be performance tuned.

Java EE 7 Performance Tuning and Optimization's initial chapter has a few things for experienced Java developers, but is really better suited for those entirely new to Java performance tuning considerations. It might also be better suited to the readers who are team leaders and consultants than those readers who are developers. The most beginning Java developers might benefit from the brief, very high level descriptions of application layers, but most of this information should be something most developers already know.

Chapter 2 of Java EE 7 Performance Tuning and Optimization provides lower-level details than the first chapter. However, much of this chapter is identical to online resources upon which it is based. One of the first sentences in Chapter 2 states, "Most of the content of this chapter adheres to Oracle Java documentations as the source of Java specifications and features." I didn't know what this meant when I first read it, but I believe it is the author's way of saying that much of the material in the chapter comes directly from Oracle's Java-related documentation.

Chapter 2's section "Understanding memory structure in the JVM" is good, but much of it is word-for-word the same as the text provided in Chapter 2 ("The Structure of the Java Virtual Machine") of the Java Virtual Machine specification and in Memory Management in the HotSpot JVM. In fact, many of the diagrams are the same or nearly the same except that the original sources have colors included in the diagrams, which are grayscale in the PDF version of Java EE 7 Performance Tuning and Optimization that I reviewed.

I also liked the "Understanding concurrency in Java" section of Java EE 7 Performance Tuning and Optimization, but it seemed to be much the same content (including several passages that are word-for-word the same) as the "Concurrency Basics" section of the Java EE 7 Tutorial and Chapter 17 ("Threads and Locks") of the Java Virtual Machine specification.

Chapter 2 also includes brief discussion of JSP/servlet application scopes and more focus on Java EE 7 concurrency features. There is some good information in this chapter, but the downsides are that some of its content seems a little out of order and much of the content relies heavily, even directly, on Oracle's documentation.

Chapter 3: Getting Familiar with Performance Testing

The third chapter provides a list of some tools that can used in performance testing, but its focus is on JMeter, which it devotes numerous pages to. The section on JMeter could have likely been a chapter of its own and provides quite a bit of detail about setting up and applying JMeter in performance testing of a web service, of a web application, and of JDBC code.

Chapter 4 of Java EE 7 Performance Tuning and Optimization provides a survey of some of the monitoring tools available for monitoring an application at different layers. The section on monitoring operating systems discusses and provides illustrations of Windows-based monitoring tools such as Windows 7 Task Manager,Resource Monitor, netstat, and Typeperf. The portion covering Linux monitoring tools is shorter (about half of a page), but lists tools such as ps, pgrep, pstree, top, vmstat, iostat, sar, and tcpdump, and refers the reader to these respective tools' man pages for additional details. The section on operating system monitoring concludes with an example of applying Windows and Linux tools to diagnose heavily contended CPUs.

The Chapter 4 section "Understanding the different JDK tools" discusses tools provided with the Oracle/Sun JDK for monitoring (jps, jstat, jstatd), profiling (JConsole, VisualVM, Java Mission Control), and troubleshooting (jhat, jstack, jinfo, jmap, jsadebugd). The overviews of each of these tools and their respective syntax seem to be borrowed directly from the Oracle tools pages (online and similar to man pages), but the section does include some specifics about using these tools in the book's examples at the end of each tool's discussion. Even the categorization of the tools is the same as the main Oracle tools page.

After introducing the three profiling tools in action profiling CPU usage and method execution times, Chapter 6 moves onto using the results provided by those tools to identify and categorize potential causes of the most significant time-consuming operations. This includes high level discussion of how to resolve many of these types of issues and a little more detailed coverage of addressing issues related to inappropriate algorithms.

The seventh chapter of Java EE 7 Performance Tuning and Optimization also looks at "options from the operating system to produce a thread dump for the executing Java process" (CTRL+Break and sending SIGQUIT signal [kill -3]). There is also a section on using the Oracle JDK tools jstack, JVisualVM, and Java Mission Control to dump heaps. The section on "Understanding the thread dump structure" provides a highly useful overview of the data included in a thread dump and how to use it. The chapter also introduces the Thread Dump Analyzer.

Chapter 7 includes very high level discussion of potential threading performance issues. It also points out that -XX:+PrintFlagsFinal and jinfo can be used with the Oracle JDK to determine which JVM flags are currently set. High level discussion on "detecting the root cause of a hung application" is also in Chapter 7. There is a very brief overview of dealing with thread-related issues at the end of the chapter.

The eighth chapter of Java EE 7 Performance Tuning and Optimization is the concluding chapter of the three-chapter series on applying Java profiling tools and this chapter specifically covers memory profiling. The chapter illustrates using NetBeans Profiler and JProfiler to perform memory profiling. This chapter also describes what is contained in a garbage collection log before briefly demonstrating use of JVisualVM's plugincalled Visual GC (the plugin version of the Oracle visualgc command-line tool that is downloaded separatelyfrom the JDK command-line tools) to see memory and garbage collection activities in the different heap memory pools.

Chapter 8 provides an overview of heap dumps and their content. It explains approaches that can be used to obtain a heap dump such as use of JVM options (-XX:+HeapDumpOnOutOfMemoryError and -XX:HeapDumpPath), Oracle JDK tools (jmap, JVisualVM, and Java Mission Control), and with Java profiler tools (NetBeans, Eclipse Memory Analyzer Tool, and JProfiler). This chapter also describes Object Query Language (OQL) and provides examples of OQL similar to those provided by the OQL Help that can be seen at http://localhost:7000/oqlhelp/when running jhat against a heap dump on the local machine.

Chapter 8 wraps up with a nice high-level overview of the types of things that commonly lead to memory issuesand OutOfMemoryError.

The tenth chapter of Java EE 7 Performance Tuning and Optimization begins with the assertion, "Design is our key to a good performing enterprise application" and then mentions the objective of the chapter to "cover some of the design areas that we should consider while designing our enterprise applications." The first section in this chapter provides high level discussion on things to think about when designing and how there are trade-offs between different design objectives. This high level discussion includes comparing "potential performance impacts" of various considerations (such as security and framework choices) on performance.

Java EE 7 Performance Tuning and Optimization's Chapter 11 begins with a discussion on performance considerations during Agile software development. This discussion addresses when in the agile development process performance considerations should be made. It also introduces Test-Driven Development (TDD) and code reviews (manual and automated) as software approaches to improve performance tuning ability. The section on automated code reviews lists several code analysis tools as standalone tools and as NetBeans tools.plugins (such as PMD).

Chapter 11's section "Using the javap tool to understand micro-optimizations" provides an overview of one of my favorite Oracle JDK command-line tools, javap, to determine how changes are impacting the byte code. The "Database performance tuning tips" section of Chapter 11 discusses a few database performance tips such as use of SQL optimizer hints and batch processing. Chapter 11 ends with a section on "Client-side optimization" that addresses "presentation layer performance." The author introduces and briefly illustrates PageSpeed Insights as part of this client-size optimization discussion.

The objective of the final chapter of Java EE 7 Performance Tuning and Optimization is "to demonstrate the performance tuning activities of a small application so that we can practice some of the activities that we have learned in this book." The example used here is called ExcellentSurvey and numerous pages are devoted to identifying and fixing performance-related issues in this ExcellentSurvey sample application. The chapter's summary also summarizes the book as a whole.

Java EE 7 Performance Tuning and Optimization is a lengthy book that at times felt lengthier to me than it needed to be. However, developers new to Java performance (both EE and SE) may appreciate this extra background. Significant portions of some of the earlier chapters are nearly word-for-word the same as online Oracle Java documentation, but some readers new to these tools may find this more convenient than reading the original sources. Experienced Java EE developers who have had to do basic tuning of their applications in the past are likely to find a few new ideas or concepts in this book, but the people most likely to benefit are those with relatively little or no Java performance experience. For them, this book provides an overall view of the landscape of tools and concepts related to Java EE (and really general JVM) performance tuning.

The book's strengths include clear screen snapshots that are especially useful in demonstrating graphical tools and discussion and demonstration of applying tools to code examples with performance issues. Its weaknesses include numerous grammar issues and typos that make the text less readable than it otherwise would have been and stating the same things too many times and being lengthier than it needs to be. On one hand, the repetition seems monotonous to someone familiar with the concepts, but, on the other hand, this repetition might benefit those new to the concepts.