Anghel Leonard's Mastering JavaServer Faces 2.2 (Packt Publishing, 2014) has the subtitle, "Master the art of implementing user interfaces with JSF 2.2." The book features twelve chapters and a short appendix spanning approximately 530 substantive pages. This blog post is my review of the PDF version of the book. 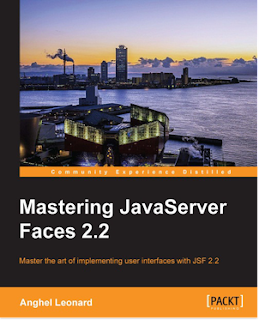 This book is a perfect symbiosis between JSF 2.0 and 2.2. It is dedicated to JSF developers who have previous experience and want to upgrade their knowledge to the new JSF 2.2. By fortifying your knowledge on JSF 2.0 and adding the power of JSF 2.2, you will soon become a JSF expert.

I re-emphasize this point here: Mastering JavaServer Faces 2.2 assumes JavaServer Faces experience.The book dives right into newer (JSF 2.2) JavaServer Features without the traditional background and introductory text one would expect from a book that introduces a language or framework. In other words, this book would be best suited for a developer with JSF experience who wants to learn about JSF 2 and JSF 2.2 new features or who has an older book on earlier versions of JSF and wants to use this book as a companion to that older book.

I liked the Chapter 1 section on "writing a custom EL resolver" because I was not previously aware that one could write one's own custom implicit variables in JSF expression language. This section introduces EL Resolvers, demonstrates how to writ a custom EL Resolver, and describes how to differentiate between aVariableResolver and a PropertyResolver.

The "EL 3.0 overview" section of the first chapter introduces EL 3.0 (part of Java EE 7), lists some of its features, and describes how to use it with JSF. One of the more interesting portions of this section for me was the coverage of EL lambda expressions and streams.

The second chapter of Mastering JavaServer Faces 2.2 opens with the statement, "Communication is the core of a JSF application, and is one of the main aspects that dictate the architecture of such an application." It adds, "JSF provides many solutions for ensuring a powerful and flexible communication layer between JSF components and also between JSF and XHTML pages, the JavaScript code, and other third-party components." With this introduction, the chapter moves onto covering a lengthy list of miscellaneous approaches tocommunicating between components of a JSF application.

Chapter 3: JSF Scopes – Lifespan and Use in Managed Beans Communication

Chapter 3 of Mastering JavaServer Faces 2.2 is all about scopes in JavaServer Faces. The chapter contrastsJSF managed beans and CDI beans and recommends "[using] CDI beans whenever possible," but does discuss situations in which JSF managed beans are preferable. This section includes a useful figure that makes it easy to see the JSF core scope annotations (javax.faces.bean) alongside the CDI scope annotations (javax.enterprise.context). The section describes each level of scope in a JSF application (request, session, view, application, conversation, flow, dependent pseudo-scope, none, custom) and whether JSF managed beans and/or CDI beans support each scope. This coverage of scopes includes code listings for each type of bean to which that scope applies. The sections on flow scope and custom scopoe are longer than the others and particularly useful in understanding these relatively more complicated scopes.

The third chapter concludes with brief sections on easy and lazy managed bean instantiation, allowable scopes for injected and injecting managed beans, and when to use @ManagedProperty versus @Inject. There are several useful figures in this chapter that use shapes and colors to illustrate points being made.

Mastering JavaServer Faces 2.2's fourth chapter looks at how JSF 2.2 allows annotations to be used to configure many characteristics of a JSF application that formerly had to be configured in a faces-config.xml file. A table that is present early in this chapter maps old ("Before JSF 2.2") namespaces to new ("JSF 2.2") namespaces. The chapter also looks at specifying certain JSF characteristics both with XML and programmatically. The chapter has sections explaining how to use and order multiple configuration files and how to support internationalization by configuring locales and resource bundles.

Chapter 4 has a lengthy section on "configuring validators and converters." I like the author's discussion in this section regarding the state of injecting dependencies into validators and whether it's supported in JSF 2.2 or 2.3. Configuring JSF application navigation in another large topic in the fourth chapter that covers implicit navigation, conditional navigation, preemptive navigation (AKA predetermined navigation), and programmatic navigation.

Chapter 5's section on overriding JSF renderers uses code listings and explanations to demonstrate overriding the HTML output by JSF components when rendered. I particularly liked the "little bit tricky" example of extending ResponseWriterWrapper to change the behavior of writeText to write escaped strings and making some other changes to support that PrimeFaces-like functionality in standard JSF. Another section in the chapter looks at extending ClientBehaviorBase and the other steps necessary to "define specific client-side behavior to a component in a reusable approach."

Chapter 5 concludes with coverage of enabling and disabling the ClientWindow API, configuring the JSF lifecycle by extending LifecycleFactory and LifecycleWrapper, configuring an application by extendingApplicationFactory and ApplicationWrapper, and configuring View Declaration Language (VDL), and using more than one configured factory in conjunction with each other to write "a Java Servlet capable of converting a non-JSF request into a JSF view."

Chapter 6 is devoted to coverage of applying <h:dataTable> to represent tabular data in JSF. Specific examples covered include rendering of tabular data from JSF-hosted POJOs, displaying a collection of objects with CollectionDataModel, presenting sorted data, an introduction to DataModel, deleting a row from a table, modifying a row in a table, adding a new row, supporting selection of a single row and multiple rows, nesting tables, paginating tables, filtering tables, and styling tables.

The sixth chapter also demonstrates how to generate a JSF table programatically with JSF API classes such asHtmlDataTable, HtmlColumn, and HtmlOutputText.

The seventh chapter of Mastering JavaServer Faces 2.2 covers use of JavaServer Faces with Ajax. The chapter introduces <f:ajax> and the JSF/Ajax lifecycle. It then provides detailed explanations of the main attributes of <f:ajax>: execute, render, listener, event, onevent, onerror.

Chapter 8 is introduced as being primarily composed of two sections: "The first part will present the JSF 2.2 support for HTML5, while the second part discusses the new upload component of JSF 2.2." The chapter's section on using HTML5 with JSF 2.2 discusses pass-through attributes and pass-through elements(TagDecorator). It also discusses application of Bean Validation 1.1 with HTML5 and JSF 2.2.

The section of Chapter 8 on JSF Upload introduces <h:inputFile> and some of its "most important" attributes before discussing use of multiple upload tags, identify characteristics of a file to be uploaded, writing uploaded data to disk, building a file upload validator, using upload with Ajax, uploading multiple files, upload with both indeterminate and determinate progress bars, and an especially lengthy discussion on providing previews of images to be uploaded.

The ninth chapter of Mastering JavaServer Faces 2.2 states early in the chapter that "JSF saves and restores the view state between requests using the ViewHandler/StateManager API. ... JSF uses this technique because it needs to preserve the views state over the HTTP protocol, which is a stateless protocol." The chapter goes on to explain how JSF 2.0 and 2.2 have improved JSF application performance with changes in how JSF state is managed. It provides a very detailed example of persisting state in JSF Mojarra to a MongoDBdatabase.

The opening statement of Chapter 10 is, "JSF is a component-based framework, and JSF custom components are the major proof that sustain JSF flexibility and extensibility." The chapter differentiates between customcomponents and composite components. I like the author's recommendation to look for already existing components as the first step when deciding to implement and then implement a custom component. This idea and a few other ideas are presented as possibly more appropriate approaches than implementing a custom component in many situations.

The second-to-last chapter of Mastering JavaServer Faces 2.2 starts with the sentence, "Starting with version 2.0, JSF developers exploit Facelets as the default View Declaration Language (VDL)." The early part of this chapter also describes a Facelet template as "a mix of XHTML and other resources such as CSS, JS, and images" that "acts as a base (or a model) for the application pages," providing "reusable code that serves as a consistent and standard look and feel." The chapter begins coverage of Resource Library Contracts by discussing the contracts folder. The chapter explains and illustrates applying style to tables and JSF components with contracts. The chapter also covers writing of contracts for composite components, writing custom themes, using XML to configure contracts, and packaging contracts in JARs under META-INF/contracts.

Mastering JavaServer Faces 2.2 introduced and referenced Facelets in earlier chapters, but this final chapter focuses on Facelets (specifically templating with Facelets). After a brief history of how Facelets supplantedJavaServer Pages as the default View Definition Language for JavaServer Faces, the chapter provides a bullet list of Facelet tags with brief descriptions of each tag in each bullet.

Until reading Mastering JavaServer Faces 2.2, I was not aware of jsfc, but that is covered in the final chapter. The chapter also discusses "Facelets programmatic aspects" such as FaceletFactory, FaceletCache,ResourceHandler, including Facelets programatically, implementing a TagHandler class and implementing Facelets taglib functions.

The section of Chapter 12 titled "Facelets pitfalls" opens with something I've definitely observed: "It is a well-known fact that JSF pitfalls are not easy to understand and fix." This section then focuses on "three common Facelets pitfalls." Chapter 12's Summary is for that chapter only; there is no overall book summary.

This appendix is barely more than a single page, but has valuable information on the JSF lifecycle depicted in a flow diagram.