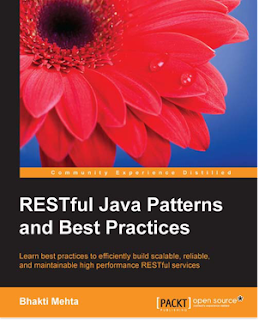 The Preface of RESTful Java Patterns and Best Practices begins with a description of why REST is important today. It includes several short summaries of each of the book's chapters. The Preface explains that Maven 3 and GlassFish 4 are required to build and run the book's examples and states that the book is designed as "a perfect reading source for application developers to get familiar with REST."

Chapter 1: REST – Where It Begins

RESTful Java Patterns and Best Practices's initial chapter provides a single paragraph on SOAP/WSDL-based web services before turning attention to REST-based web services. The basic characteristics of and increased "-ilities" provided by REST are described. The Richardson Maturity Model is also examined in some detail. I'm not sure that the Richardson Maturity Model clears things up or muddies them by encouraging interchangeable use of the terms HTTP and REST.

The first chapter includes brief descriptions of the characteristics of safe methods and of idempotentmethods and describes which HTTP methods fit each category. The chapter then lists several "design principles for building RESTful services" before describing each in greater detail. This is section provides a brief and highly readable introduction to the basics of REST.

Chapter 1 provides a nice introduction to the Client API that is new to JAX-RS 2.0. It also briefly discusses some other approaches one can use to communicate and work with REST-based services: curl, Postman on Chrome, Advanced REST Client for Google Chrome, and JSONLint. Both curl and Postman get extra attention including a color screen snapshot of Postman in the electronic edition I reviewed.

The first chapter concludes with a bullet-format list of "best practices when designing resources," a list of related online resources, and a Summary. Overall, this first chapter is a nice high-level introduction to REST and to Java's approach to REST via JAX-RS. The code examples are simple and short and easy to understand. Just enough detail is provided to get a feel for REST and JAX-RS.

The second chapter provides greater details regarding application of JAX-RS to REST-based application implementation. The examples are relatively short and clear and illustrate well the points being made.

Chapter 3's section on validating services states, "JAX-RS supports the Bean Validation to verify JAX-RS resource classes." The text and accompanying code samples demonstrate use of bean validation with standard annotations such as @ValidateOnExecution, @Valid, and @NotNull and a custom annotation @VerifyValue. This section also demonstrates with code and explanation how to create a custom exception mapper (implementation of ExceptionMapper that "catch[es] thrown application exceptions and write[s] specific HTTP responses.").

Chapter 3's coverage or authorization includes more details on characteristics of OAuth 2.0. Access and refresh tokens are covered as is the level of support for OAuth 2.0 provided by Jersey (the Jersey implementation supports client side only and Authorization Code Grant Flow).

The third chapter includes a section titled "Best practices for OAuth [2.0] in the REST API." Although these seem to be generally applicable to use of OAuth whether REST is involved or not, I liked the table presenting different situations and when SAML or OAuth is preferable. There is a very brief section in Chapter 3 that introduces OpenID Connect, which the author describes as "a simple REST- and JSON-based interoperable protocol built on top of OAuth 2.0."

Before concluding with the summary and recommended reading sections typical of chapters in RESTful Java Patterns and Best Practices, the third chapter briefly outlines "REST architectural components" to be covered in more detail later. One "recommended reading" that I found particularly interesting is OAuth 2.0 and the Road to Hell.

RESTful Java Patterns and Best Practices's fourth chapter advertises itself as covering "advanced design principles related to performance that every developer must know when building RESTful services." Discussion of strong and weak HTTP caching headers is preceded by an overview of general caching principles. A code listing and accompanying explanation demonstrate how to specify HTTP caching headers in JAX-RS responses. Similarly, this section also looks at the ETag response-header field and how to apply it to a JAX-RS response. The section of Chapter 4 on caching concludes with a brief description of RESTEasy's extension to JAX-RS caching.

"Asynchronous and long-running jobs in REST" is the second major topic of Chapter 4. This section uses code listings, textual explanations, and sequence diagrams to demonstrate use of JAX-RS 2.0 support for asynchronous processing with constructs such as AsyncResponse, @Suspended, CompletionCallback,ConnectionCallback, InvocationCallback, and Java SE Future interface.

There is a section in Chapter 4 that discusses dealing with partial updates in a REST application using PATCH,PUT, or POST. This section demonstrates creation of an annotation called @PATCH to annotate JAX-RS methods to be used for patch functionality.

The final section of Chapter 4 of RESTful Java Patterns and Best Practices before its summary and recommended reading section is on JSON Patch. This section provides a brief overview of JSON Patch and provides code listing and explanations of how to use JSON Patch.

The promise of RESTful Java Patterns and Best Practices's fifth chapter is to cover "advanced design principles that every developer must know when designing RESTful services." The covered topics are rate-limiting patterns, response pagination, internationalization and localization, REST pluggability and extensibility, and some miscellaneous topics. The section on rate-limiting pagination is relatively lengthy and includes code snippets and discussion as well as an outline of some best practices for reducing and avoiding rate-limiting pagination.

The "Miscellaneous topics" section of Chapter 5 discusses Hypermedia as the Engine of Application State(HATEOAS), which I believe is one of the most commonly misunderstood and under-appreciated features of REST for those new to REST. This chapter's introduction, which includes examples, is a relatively straightforward and concise introduction to the topic. After introducing HATEOAS, the chapter uses an example of PayPal's REST API support for HATEOAS to illustrate real-world application of HATEOAS.

Another Chapter 5 "Miscellaneous Topic" addresses REST extensibility. This is only covered very briefly (single paragraph) and makes assertions about REST being more maintainable and readable (presumably than SOAP-based web services) with lightly offered justification for these claims. Given how little concrete evidence (and no practical examples) is provided, this section is not very compelling.

Chapter 5 concludes with a brief discussions of topics related to documenting and testing REST-based applications. The most appealing part of this coverage for me was the reference to tools that can be used for testing and documenting REST-based applications. This section introduces REST Assured, which it describes as "the Java DSL for easy testing of RESTful services," and provides a simple illustrative example of this in action. The coverage of Swagger does not illustrate its use, but does describe it as "a language-agnostic framework implementation for describing, producing, consuming, and visualizing RESTful web services."

Chapter 6: Emerging Standards and the Future of REST

Although the Fielding dissertation that codified the REST concept was published in 2000, it continuing rising popularity has meant new developments in understanding and applying of the REST architectural style and in the available related tooling. This chapter begins by describing real-time APIs and describing polling and the disadvantages of polling.

Chapter 6 provides brief explanations of how PubSubHubbub and streaming can each be used to address the limitations of polling. Both of these approaches are explained with text and simple graphics. The section on streaming discusses server-sent events (SSE) and their nonstandard support in Jersey.

RESTful Java Patterns and Best Practices's final chapter also introduces WebHooks, which it defines as "a form of user-defined custom HTTP callbacks." This section uses text description, simple graphics, and coverage of implementing case studies to explain this topic. The WebSockets protocol is also covered in the sixth chapter and is described as "a protocol that provides full-duplex communication channels over a single TCP connection." WebSockets is explained with text descriptions, simple graphics, a table, and a code listing. A couple paragraphs each are also dedicated to introducing (at a conceptual level) XMPP and BOSH over XMPP.

As is the case with the previous five chapters, Chapter 6 ends with a "Recommended Reading" section and a "Summary." The "Summary" is mostly a summary of the chapter rather than the book, though there is a reference to another book co-authored by this book's author: Developing RESTful Services with JAX-RS 2.0, WebSockets, and JSON. The summary for the overall book is left to the Appendix, which is really just another chapter and which I review later in this post.

The sixth and final chapter of RESTful Java Patterns and Best Practices is a high-level overview of trending considerations for REST-based applications. This chapter has very little Java-specific (or JAX-RS-specific) content.

Although RESTful Java Patterns and Best Practices's table of contents lists six chapters and an appendix, the Appendix feels just like the six chapters. It not only has "Recommended Reading" and "Summary" sections like its preceding chapters, but it even includes text that refers to "this chapter." The chapter/appendix introduces three REST APIs: REST API from GitHub, Open Graph API from Facebook, and REST API from Twitter. For me, the most interesting aspect of these introductions was how the author illustrated some of the patterns covered previously in the book from each covered API's perspective. This provides reinforcement with concrete APIs of some of the previously discussed concepts and patterns.

The Appendix's "Summary" summarizes the appendix and the entire book.

RESTful Java Patterns and Best Practices introduces basic REST concepts, patterns, and practices and how to apply many of those patterns and concepts with JAX-RS. This book is probably best suited for those looking for introductory information on a broad set of considerations pertinent to REST applications and implementing those considerations with Java and JAX-RS. For those seeking more detailed coverage of REST principles and JAX-RS application of those principles, RESTful Java with JAX-RS 2.0 might be more appropriate.