Microsoft is getting ready once again to give developers a chance to go deep into Windows with the 2014 edition of its BUILD conference. This year's event was held in late June in San Francisco and it seems Microsoft liked the location so much, the 2014 BUILD conference will be held in the "City by the Bay" yet again. 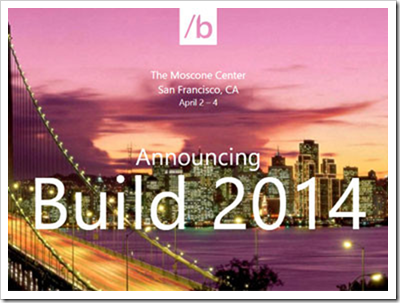 Microsoft's news site shows  that the exact date for BUILD 2014 will be April 2-4 and it will be held at the Moscone Center in downtown San Francisco. Registration for the event will begin on January 14th at noon Eastern time (9 am Pacific) so you have plenty of time to get your schedule all sorted out if you are interested in attending.

It seems like we were just gathered in San Francisco for Build 2013 and yet a lot has happened since that time. Windows 8.1 is in the hands of consumers and there is a great selection of new devices at all sizes and price points coming in time for the holidays. Last month, we released Xbox One and sold more than two million units in the first 18 days. And we continue to see the addition of great new apps, with differentiated user experiences, coming to the platform from top names such as Flipboard, Instagram, Waze, Vine and Mint alongside thousands of local apps growing every day.

The momentum just keeps building and that is why I’m so excited to announce our next developer conference, Build 2014, which will take place April 2 to April 4 at the Moscone Center in San Francisco. Save the date and mark your calendar for registration, which opens at 9 a.m. PT on Jan. 14 at www.buildwindows.com.

As always, Build is a time to bring developers together to talk about our latest products, platform advances, tools and offerings, all of which come together to create unmatched apps and scenarios. With Windows, developers can create new experiences to reach hundreds of millions of devices on peoples’ desks, in their homes, in their pockets and in their living rooms. At this year’s event, we’ll talk about what’s next for Windows, Windows Phone, Windows Azure, Windows Server, Visual Studio and much more. ...

I'm hoping we hear about Windows 8.2 (or 9 or Threshold or whatever), Windows Phone 8.1, .Net 5, C#6, Xbox One Dev (and wouldn't some loving to WPF and Desktop Dev's be nice!). I really doubt we'll hear about a new VS. It's just too soon. I'm betting we'll hear about the next VS at TechEd 2014. [Update: Looks like I might have been wrong about the VS and Xbox One stuff, based on the official notice...]