Since I wrote my first GraphQL post in 2019, much has changed with GraphQL in the .NET space. The ongoing changes have also affected most of the documentation available online. This article will walk you through the steps to create a basic GraphQL API on ASP.NET Core using GraphQL for .NET, Entity Framework Core, Autofac, and the Repository design pattern. I chose the tech stack for the sample application based on the popularity of the frameworks and patterns. You can substitute the frameworks or libraries with equivalent components in your implementation.

If you are not familiar with the concepts of GraphQL, please take some time to read the learn series of articles on the GraphQL website. Let's now fire up our preferred editor or IDE to get started.

I will not cover GraphQL Subscriptions which are a way to create and maintain a real-time connection with the GraphQL server. This feature enables the server to push instant information about related events to the client. You can read more about Subscriptions on the Apollo docs website.

For reference, the source code of the application is available in my GitHub repository.

Let's add the required NuGet packages to add support for GraphQL, Entity Framework Core, and Autofac in our project. For simplicity, I will use an in-memory database for persisting the movie data. You can use any database supported by Entity Framework for this purpose.

We will now update the CreateHostBuilder in the class Program to use Autofac as the service provider responsible for dependency injection (DI).

We will now define the Movie and Review models/entities for our project. Create a folder named Models and create a class file named Review in it, as follows:

We will configure Entity Framework to operate with these entities next.

We will now set up the connection with the database. As I previously said, we will use the InMemory database with Entity Framework Core.

Create a folder named Database in the project, and create a class file named MovieContext in the folder. Define the code in MovieContext as follows:

Note that we added a few movies and ratings as seed data in the database. We will now register our DbContext with the application. Navigate to the Startup class and add the following code to the ConfigureServices method:

Let's implement the repository pattern that uses the database context to fetch a movie and add a movie review. Create an interface named IMovieRepository in the Database folder as follows.

Let's implement this interface in a class named MovieRepository as follows:

We will set up dependency injection using Autofac at the end, which will make the constructor injection code functional. Let's now start adding GraphQL support to our API, beginning with the GraphQL middleware.

We have already added the relevant GraphQL NuGet packages to our application. One of the packages that we installed is GraphQL.Server.Ui.Altair which provides a GraphQL UI client that helps you debug GraphQL queries and mutations. We will add the Altair UI to our application by adding the app.UseGraphQLAltair() middleware in the Configure method of the Startup class as follows:

The middleware will make the Altair UI available at the default (/) endpoint.

Let's configure the required GraphQL services in our application. Add the following code to the ConfigureServices method in the Startup class:

GraphQL.NET SDK uses the builder pattern to configure the required GraphQL services. The AddGraphQL method configures certain global settings, such as the maximum depth of a query. We also configured the logger to capture and log any unhandled GraphQL exceptions.

The AddGraphTypes method scans the application's assembly to detect the types (schema, queries, and mutations) and registers them in the DI container with a singleton lifetime.

The AddDataLoader method optimizes the calls to our repository so that data is served with as few database requests as possible. You can read more about this feature on the GraphQL.NET documentation.

We defined the Movie and Review classes against which we want to execute a query and a mutation. However, we can't directly use a query or a mutation on these classes. To make these classes queryable, we need to create a new type and inherit it from ObjectGraphType<T> where <T> is the type of object that the graph represents: Movie or Review.

Create a folder named GraphQL and create another folder named Types in it. Add the MovieObject class files to the folder.

Next, add the ReviewObject class file to the folder as follows:

Next, we will create the GraphQL schema. A schema defines the server's API, informing the clients about the operations (query, mutation, and subscription) that the server can perform. To define our schema, create a class file named MovieReviewSchema in the GraphQL folder and populate it with the following code:

We will define the mutation operation later. Let's begin with defining the query which is encapsulated in the QueryObject class. Create a class file named QueryObject in the GraphQL folder as follows:

We defined a query named movie that takes a GUID identifier as input, and the query resolver uses the repository's GetMovieByIdAsync method to fetch the movie object.

To define a mutation operation that adds a movie review, add another graph type named ReviewInputObject in the Types folder with the following code:

Next, let's define the mutation operation, which is encapsulated in the MutationObject graph type. Create a class file named MutationObject in the GraphQL folder as follows:

Finally, we will register the schema MovieReviewSchema using the GraphQL middleware. Please navigate to the Configure method in the Startup class and add the following code snippet to it:

You might have noticed that we haven't yet defined any API controller or HTTP handler to process an incoming GraphQL request. Custom handlers are not required because the GraphQL middleware handles the incoming HTTP requests to the GrapQL endpoint. The default path to the GraphQL endpoint is /graphql. You can specify an alternate path as an argument to the UseGraphQL<T> method.

Finally, let's tie everything together by configuring dependency injection in the Startup class. Create a method named ConfigureContainer, a special method used to register dependencies directly with Autofac. You don't need to build the dependency container as it is built automatically by the AutofacServiceProviderFactory instance specified in the Program class:

Let's start the GraphQL server and use Altair to debug the API. Press F5 use the command dotnet run. Navigate to the base URL of your application to open the Altair UI, as shown in the figure below. 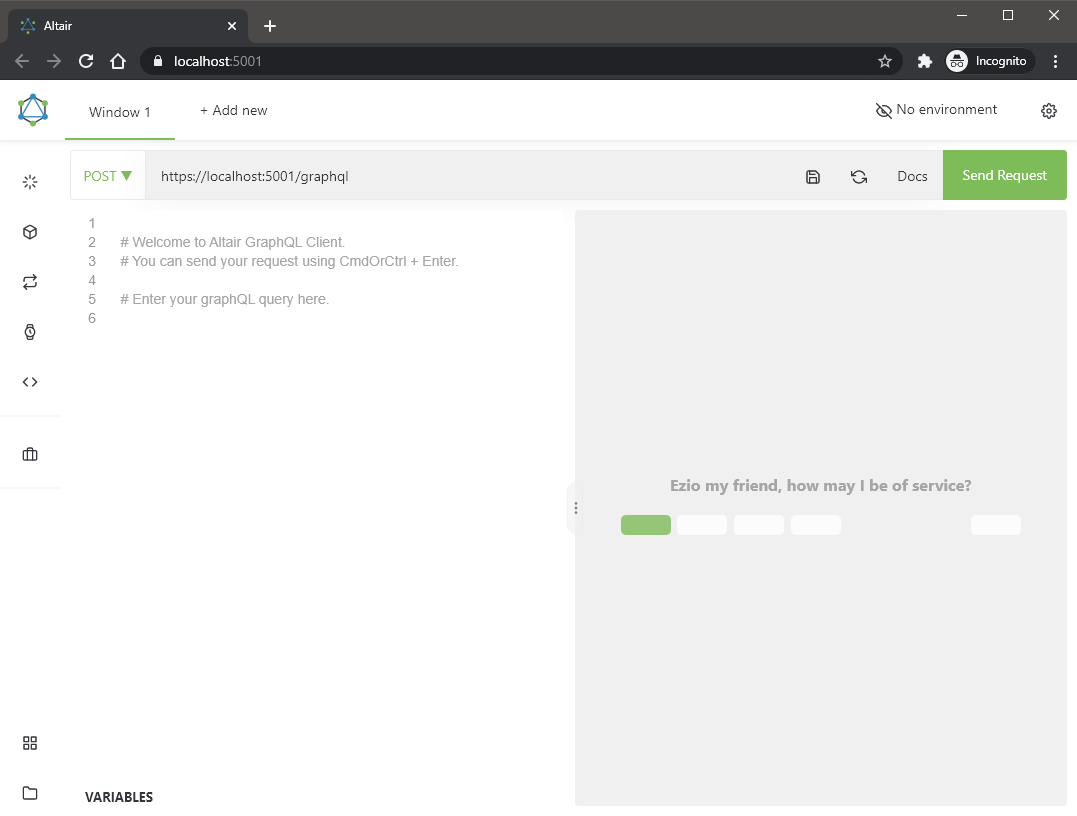 Let's try to fetch the details of a movie using the following query: 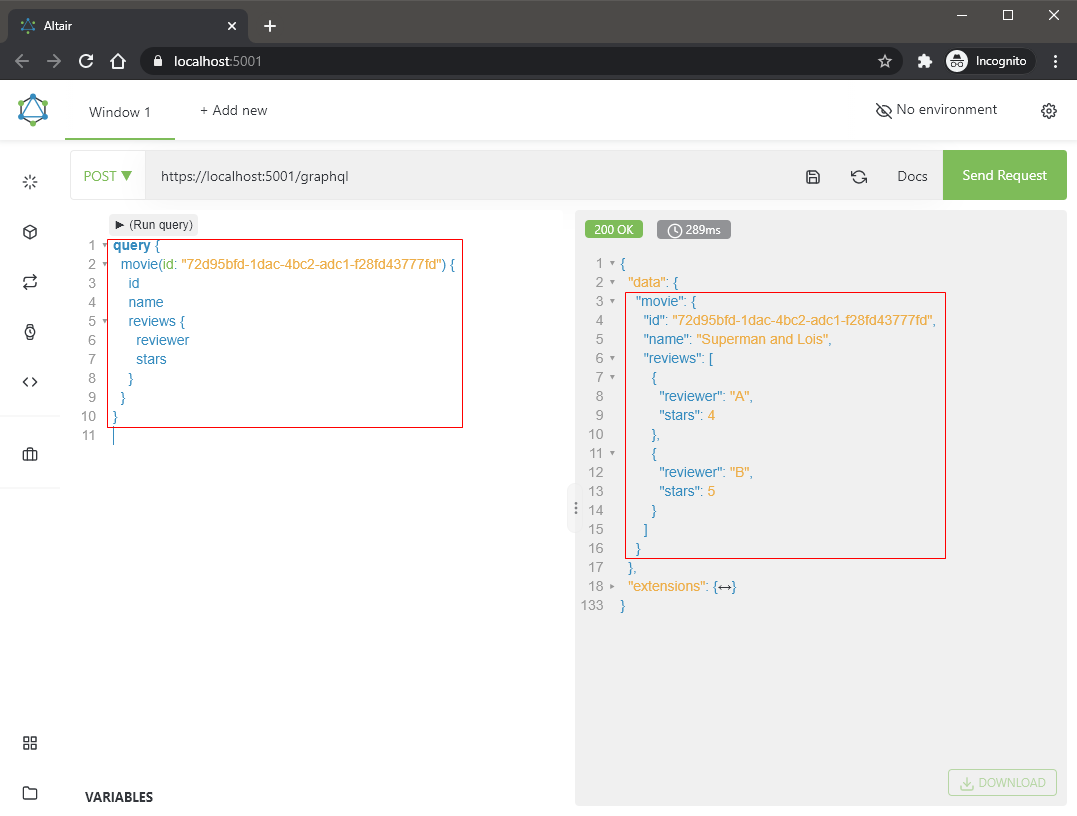 Let's now execute the following mutation operation to add a review to the movie:

We require a variable named review of type ReviewInput for this operation. Let's declare the variable as follows:

Execute the operation to fetch the updated movie record. 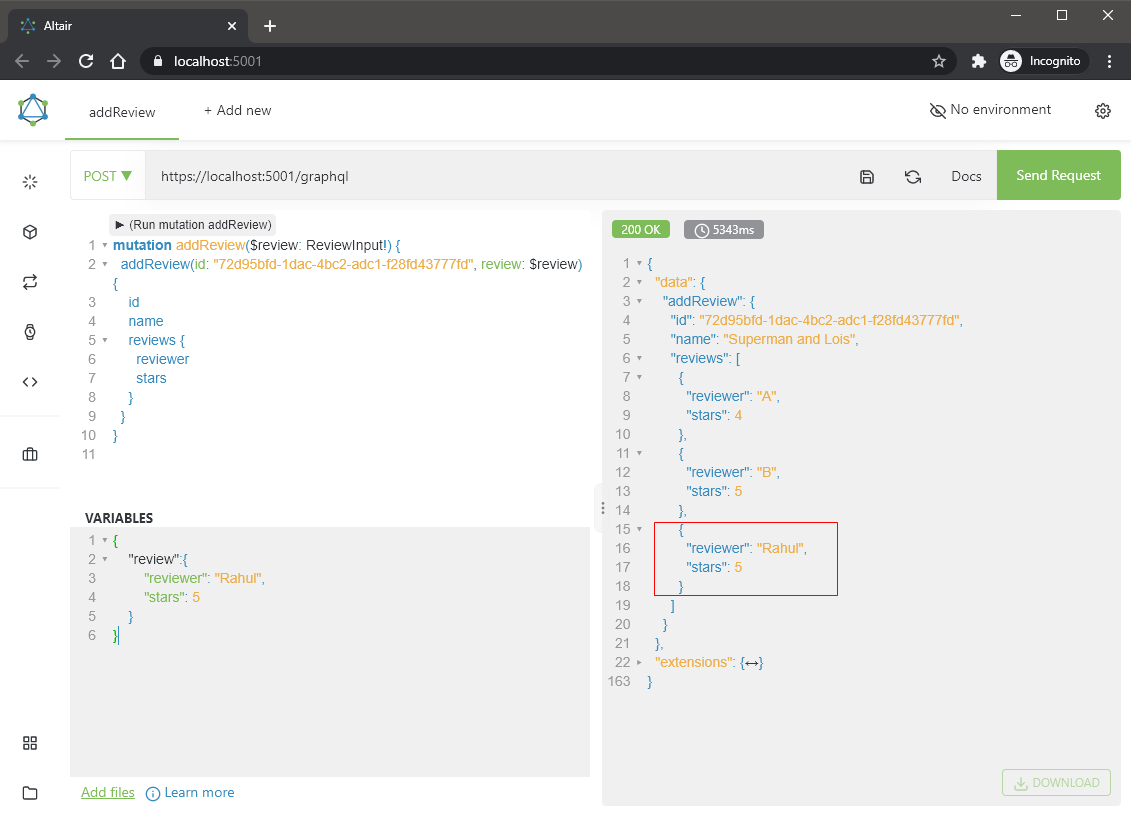 In this article, we covered the basics of setting up a GraphQL API with ASP.NET Core. We defined the schema using the code-first approach, defined the graph types, and wrote query/mutation resolvers to set up the API. We used the GraphQL NuGet package for .NET, which did the heavy lifting with minimal setup. We used Autofac and the repository pattern to decouple individual components and adhere to the Single Responsibility Principle (SRP). Finally, we used the Altair UI to debug the API.

I encourage you to extend the types of supported operations to output a list of movies and explore subscriptions to push new reviews to the client.

As always, I'd love to hear from you. Send in your questions or feedback in the comments section or on Twitter @rahulrai_in.