NodeJS  brings the simplicity of JavaScript to the backend. Today, we will build an entire application with NodeJS, starting with a blank canvas and finishing with a fully functional application with multiple routes, authentication, and even remote data access. Check out the completed code example from our GitHub repo.

Node Js, or Node.js, NodeJS, or simply Node was first released in 2009 by Ryan Dahl and has become one of the most popular backend programming languages today. NodeJS is for all intents and purposes JavaScript but instead of running in the users browser, NodeJS code is executed on the backend. Developers familiar with JavaScript will be able to dive right in and write NodeJS code.

In our tutorial today, we will write a complete NodeJS application using one of the most popular web frameworks for Node, Express.js. We'll cover everything from project setup to routing, calling external API's, and more. Before we dive into the code let's understand why NodeJS  is so popular and widely used to give you a deeper understand of why you may want to use NodeJS for your applications.

The Rise of NodeJS

NodeJS became an overnight sensation for multiple reasons. Performance played a huge factor. NodeJS was built around an event-based architecture and asynchronous I/O. This allowed NodeJS applications to achieve superior I/O and load performance compared to other programming languages. NodeJS code is compiled to machine code via Google's V8 JavaScript Engine. Let's take a look at a few other factors that led to the rise of NodeJS:

JavaScript on the Backend

JavaScript as a programming language has many flaws. It is also the only language that runs in the web browser today. If you want your website or app to have any type of dynamic functionality, you'll have to implement it in JavaScript. This fact led many developers to learn JavaScript, and soon many open source libraries followed.

Due to NodeJS being JavaScript, many of these libraries, such as lodash, Moment, and request could be used on the backend without any modification whatsoever. In many instances, developers were able to write their code once, and have it run on both the frontend and the backend allowing many to quickly become full-stack developers.

The Node Package Manager or npm is one of the biggest reasons for Node's popularity. NPM allowed developers to easily manage all of the wonderful libraries released by the open source community. Developers could simply type a command like npm install lodash, and the Node Package Manager would go out and download the latest version of lodash into a special node_modules directory and then the developer could access the lodash library by just requiring it in their code.

NPM was revolutionary and to this day remains one of the best package managers around. It was not the first package manager: NuGet exists for the .Net platform, pip for Python, gems for Ruby, and so on, but the simplicity of NPM has had a major role in Node's success.

NodeJS is not limited to building web applications. With Electron, for example, you can build native desktop applications with Node; we even have a tutorial on how to here. Utilities and build systems are very popular candidates with NodeJS, Bower is a popular front-end package manager built with Node, while Gulp, Grunt, and WebPack are task runners and build systems built with Node that can improve workflows and increase developer efficiency.

Due to the small footprint and low resource requirements for running NodeJS applications, NodeJS is leading the charge in serverless computing with platforms like Webtask, AWS Lambda, and Google Cloud Functions all supporting NodeJS almost exclusively.

Is NodeJS For Me?

The age-old debate and probably most difficult question to answer. It depends. This may seem like a cop-out answer, but it really depends. Here at Auth0, we use NodeJS extensively and it's proven its worth in helping us scale. Check out our Stories from the Trenches blog for more in-depth coverage on how we make use of various technologies throughout our organization.

NodeJS is great for many use cases, but not so good in others. If you need high I/O that doesn't require a lot of computation, such as serving assets or webpages, then Node will keep you satisfied. If you are doing complex operations, such as hashing passwords or running simulations, NodeJS will likely underperform. Examine your use case carefully and use the right tool for the job.

"Node Js excels in many use cases, but is not a silver bullet for everything."

Building an Application with NodeJS 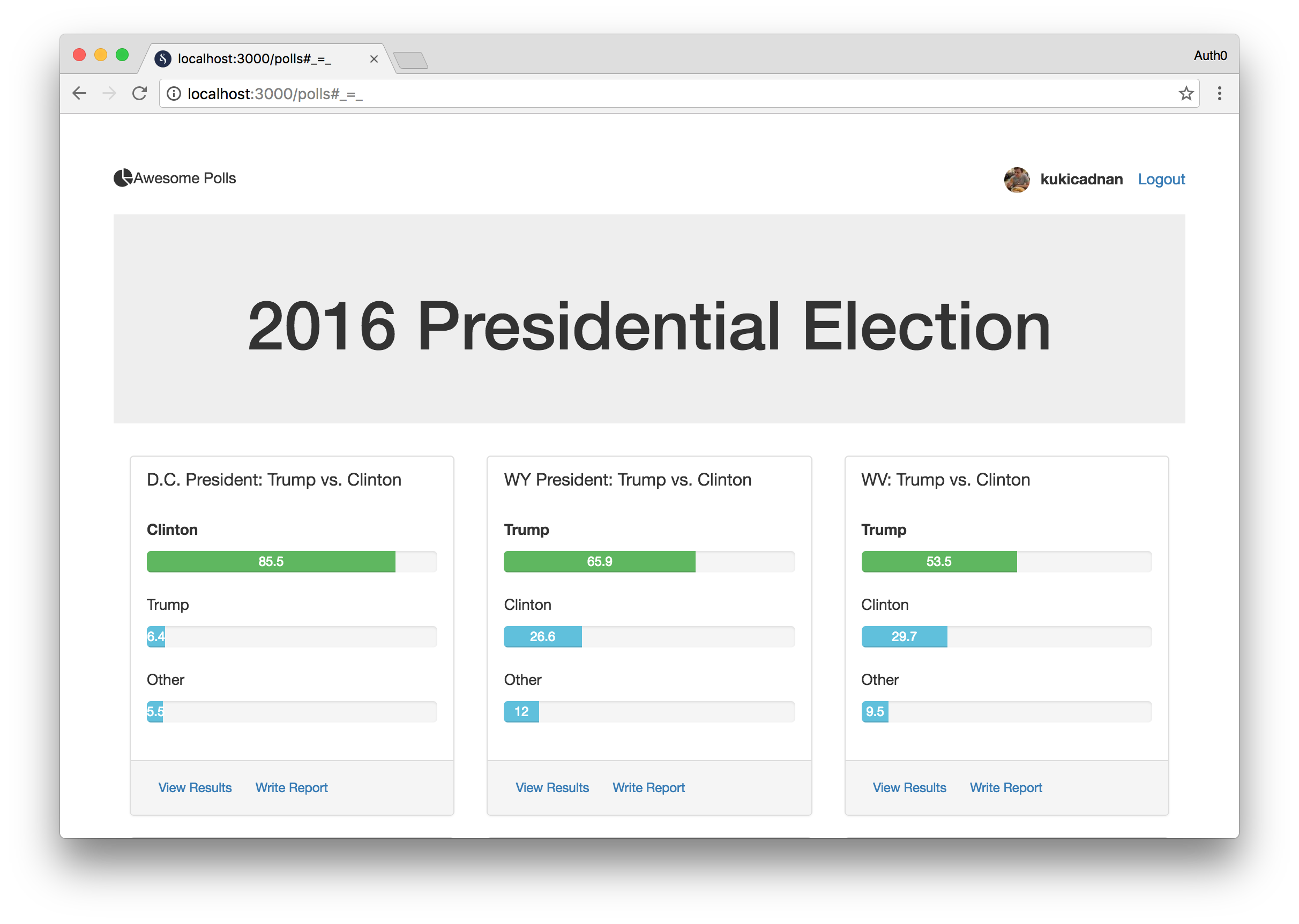 Now that we know more about NodeJS, we are ready to get coding and building our application. The application we'll be building today is called Awesome Polls. The United States just had its presidential elections and we are going to build an app to help us analyse the results. Imagine you're building this app for a news organization that wishes to have the most up to date data so that it can provide accurate reports to it's viewers.

For this tutorial we will assume that you have at least some JavaScript and general programming knowledge, but no NodeJS exposure, so we'll take it step by step. As always, you can check out the completed code from the GitHub repo if you would like to just follow along.

To install NodeJS head over to the official website located at https://nodejs.org and you'll see a giant green download button for your operating system. In our tutorial today, we'll be running the 6.x LTS version of Node. Simply download the executable, run it, and go through the steps to install NodeJS on your system.

If you are on a Mac, you can also install NodeJS and NPM via Homebrew. Simply run homebrew install node from your terminal and in seconds Node and NPM will be installed.

We will want to ensure that both NPM and Node are installed. Once you've gone through the installation steps, either manually or via homebrew, we'll confirm that the installation was successful. To do that, close and re-open your terminal window and run the command node -v. This command will let you know the current version of Node installed. Next, run npm -v, and likewise you should see the version of the Node Package Manager installed on your system. 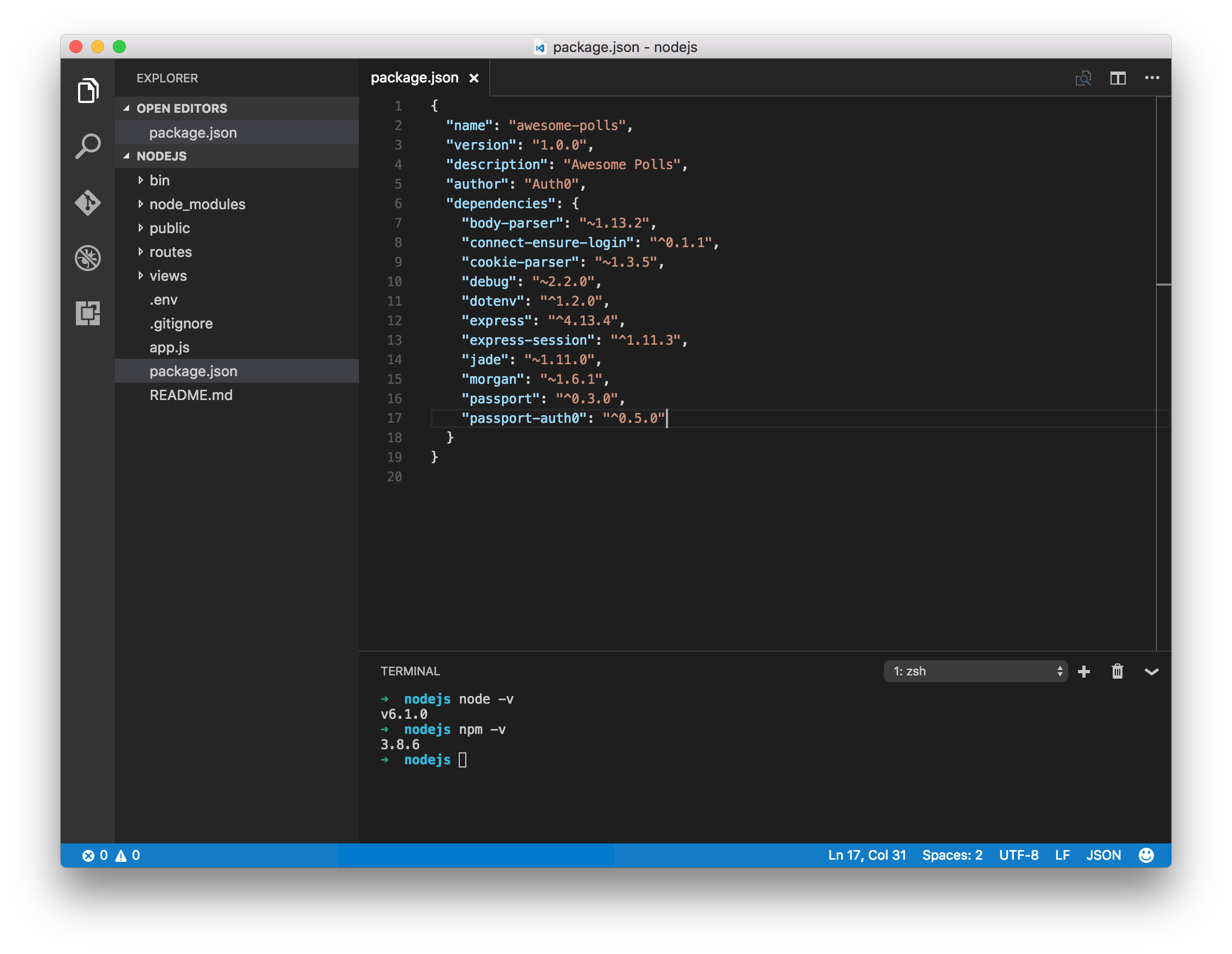 Note: Node.js has two versions. A 6.x stable/long-term support version and 7.x which is the cutting edge version, that supports some of the latest ES6 features. Both versions are production-ready, and for this tutorial we'll be using the 6.x version of Node.

Now that we have Node and NPM installed, we are ready to continue. One of the best things about Node applications, for me personally, is the ability to have your application live anywhere in the file system. Each Node application is self-contained, so to set up our project, let's just create a directory on our desktop called awesome-polls and we'll place our entire application in this directory.

The first file we'll add to this project is a package.json file. This file will keep track of all of our dependencies as well as provide some useful info about our application. You can either manually create this file, or run the command npm init and walk through the step-by-step process. Remember to navigate to the awesome-polls directory in your terminal first, otherwise your package.json file will be created elsewhere.

Let's see how this works. We will use the Express JavaScript web framework for building our application. Currently, we don't have Express installed on our machine. To get it, simply run npm install express --save. In just a few seconds, Express will be downloaded and stored in a new directory in your file system called node_modules. This directory will be located in your awesome-polls directory and is a local dependency. You can also install global dependencies by passing a -g flag, but you probably won't want to do this for the majority of libraries you install. Utilities such as Webpack, you'd install globally.

You can also install multiple dependencies at once. Let's install the rest of our dependencies. Write the following:

These are all of the 3rd party open source libraries we will rely on to write our application. It's ok if you don't understand what many of these mean or do just yet, we'll get there. To close out this section, take a look at your package.json file and you'll see that there is a new section now called dependencies with the libraries we've included.

NodeJS and Express.js are both pretty unopinionated when it comes to directory structure. You are free to define your own and won't be penalized for having too many or too few layers of abstraction. At the end of the day, the code is compiled and code structure flattened, so feel free to experiment with what works best for you. This will also depend a lot on the size and scope of your application. Our demo app is fairly small so our structure will look like:

Our directory structure is fairly simple. We'll build our app in an MVC style fashion. Our views directory will hold all of our front-end views, while the routes directory will handle the traditional controller logic. We won't have any models for this simple application. Again, it's ok if some of these files don't make sense just yet. I'll explain them all in detail shortly.

Stay tuned for Parts II and III to get finished up!