[Editor’s note – The other articles currently available in this seven-part series are:

Let’s imagine that you are developing a native mobile client for a shopping application. It’s likely that you need to implement a product details page, which displays information about any given product.

For example, the following diagram shows what you will see when scrolling through the product details in Amazon’s Android mobile application.

Even though this is a smartphone application, the product details page displays a lot of information. For example, not only is there basic product information (such as name, description, and price) but this page also shows:

When using a monolithic application architecture, a mobile client would retrieve this data by making a single REST call (GET api.company.com/productdetails/productId) to the application. A load balancer routes the request to one of N identical application instances. The application would then query various database tables and return the response to the client. 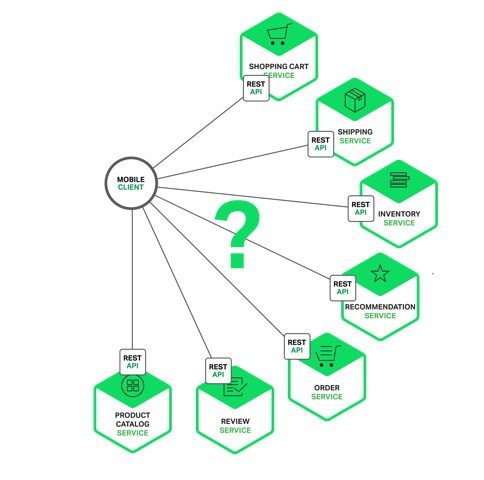 We need to decide how the mobile client accesses these services. Let’s look at the options.

Unfortunately, there are challenges and limitations with this option. One problem is the mismatch between the needs of the client and the fine-grained APIs exposed by each of the microservices. The client in this example has to make seven separate requests. In more complex applications it might have to make many more. For example, Amazon describes how hundreds of services are involved in rendering their product page. While a client could make that many requests over a LAN, it would probably be too inefficient over the public Internet and would definitely be impractical over a mobile network. This approach also makes the client code much more complex.

Another problem with the client directly calling the microservices is that some might use protocols that are not web-friendly. One service might use Thrift binary RPC while another service might use the AMQP messaging protocol. Neither protocol is particularly browser- or firewall-friendly and is best used internally. An application should use protocols such as HTTP and WebSocket outside of the firewall.

Another drawback with this approach is that it makes it difficult to refactor the microservices. Over time, we might want to change how the system is partitioned into services. For example, we might merge two services or split a service into two or more services. If, however, clients communicate directly with the services, then performing this kind of refactoring can be extremely difficult.

Because of these kinds of problems it rarely makes sense for clients to talk directly to microservices.

Usually, a much better approach is to use what is known as an API Gateway. An API Gateway is a server that is the single entry point into the system. It is similar to the Facade pattern from object-oriented design. The API Gateway encapsulates the internal system architecture and provides an API that is tailored to each client. It might have other responsibilities such as authentication, monitoring, load balancing, caching, request shaping and management, and static response handling.

The following diagram shows how an API Gateway typically fits into the architecture: 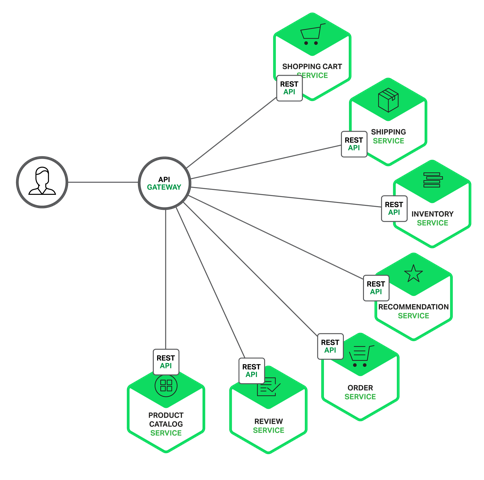 The API Gateway is responsible for request routing, composition, and protocol translation. All requests from clients first go through the API Gateway. It then routes requests to the appropriate microservice. The API Gateway will often handle a request by invoking multiple microservices and aggregating the results. It can translate between web protocols such as HTTP and WebSocket and web-unfriendly protocols that are used internally.

The API Gateway can also provide each client with a custom API. It typically exposes a coarse-grained API for mobile clients. Consider, for example, the product details scenario. The API Gateway can provide an endpoint (/productdetails?productid=xxx) that enables a mobile client to retrieve all of the product details with a single request. The API Gateway handles the request by invoking the various services – product info, recommendations, reviews, etc. – and combining the results.

A great example of an API Gateway is the Netflix API Gateway. The Netflix streaming service is available on hundreds of different kinds of devices including televisions, set-top boxes, smartphones, gaming systems, tablets, etc. Initially, Netflix attempted to provide a one-size-fits-all API for their streaming service. However, they discovered that it didn’t work well because of the diverse range of devices and their unique needs. Today, they use an API Gateway that provides an API tailored to each device by running device-specific adapter code. An adapter typically handles each request by invoking on average six to seven backend services. The Netflix API Gateway handles billions of requests per day.

Benefits and Drawbacks of an API Gateway

Now that we have looked at the motivations and the trade-offs for using an API Gateway, let’s look at various design issues you need to consider.

Only a handful of companies operate at the scale of Netflix and need to handle billions of requests per day. However, for most applications the performance and scalability of the API Gateway are usually very important. It makes sense, therefore, to build the API Gateway on a platform that supports asynchronous, non-blocking I/O. There are a variety of different technologies that can be used to implement a scalable API Gateway. On the JVM, you can use one of the NIO-based frameworks such Netty, Vertx, Spring Reactor, or JBoss Undertow. One popular non-JVM option is Node.js, which is a platform built on Chrome’s JavaScript engine. Another option is to use NGINX Plus. NGINX Plus offers a mature, scalable, high-performance web server and reverse proxy that is easily deployed, configured, and programmed. NGINX Plus can manage authentication, access control, load balancing requests, caching responses, and provides application-aware health checks and monitoring.

Writing API composition code using the traditional asynchronous callback approach quickly leads you to callback hell. The code will be tangled, difficult to understand, and error-prone. A much better approach is to write API Gateway code in a declarative style using a reactive approach. Examples of reactive abstractions include Future in Scala, CompletableFuture in Java 8, and Promise in JavaScript. There is also Reactive Extensions (also called Rx or ReactiveX), which was originally developed by Microsoft for the .NET platform. Netflix created RxJava for the JVM specifically to use in their API Gateway. There is also RxJS for JavaScript, which runs in both the browser and Node.js. Using a reactive approach will enable you to write simple yet efficient API Gateway code.

The API Gateway needs to know the location (IP address and port) of each microservice with which it communicates. In a traditional application, you could probably hardwire the locations, but in a modern, cloud-based microservices application this is a non-trivial problem. Infrastructure services, such as a message broker, will usually have a static location, which can be specified via OS environment variables. However, determining the location of an application service is not so easy. Application services have dynamically assigned locations. Also, the set of instances of a service changes dynamically because of autoscaling and upgrades. Consequently, the API Gateway, like any other service client in the system, needs to use the system’s service discovery mechanism: either Server‑Side Discovery orClient‑Side Discovery. A later article will describe service discovery in more detail. For now, it is worthwhile to note that if the system uses Client-Side Discovery then the API Gateway must be able to query the Service Registry, which is a database of all microservice instances and their locations.

Another issue you have to address when implementing an API Gateway is the problem of partial failure. This issue arises in all distributed systems whenever one service calls another service that is either responding slowly or is unavailable. The API Gateway should never block indefinitely waiting for a downstream service. However, how it handles the failure depends on the specific scenario and which service is failing. For example, if the recommendation service is unresponsive in the product details scenario, the API Gateway should return the rest of the product details to the client since they are still useful to the user. The recommendations could either be empty or replaced by, for example, a hardwired top ten list. If, however, the product information service is unresponsive then API Gateway should return an error to the client.

Netflix Hystrix is an incredibly useful library for writing code that invokes remote services. Hystrix times out calls that exceed the specified threshold. It implements a circuit breaker pattern, which stops the client from waiting needlessly for an unresponsive service. If the error rate for a service exceeds a specified threshold, Hystrix trips the circuit breaker and all requests will fail immediately for a specified period of time. Hystrix lets you define a fallback action when a request fails, such as reading from a cache or returning a default value. If you are using the JVM you should definitely consider using Hystrix. And, if you are running in a non-JVM environment, you should use an equivalent library.

For most microservices-based applications, it makes sense to implement an API Gateway, which acts as a single entry point into a system. The API Gateway is responsible for request routing, composition, and protocol translation. It provides each of the application’s clients with a custom API. The API Gateway can also mask failures in the back-end services by returning cached or default data. In the next article in the series, we will look at communication between services.

[Editor’s note – The other articles currently available in this seven-part series are:

Published at DZone with permission of Chris Richardson. See the original article here.