With the advent of Windows Phone 8.1 multiple resolution are now also becoming a fact of life for Windows Phone developers (as they already were for Windows Store developers). This has a few side effects, which will require you to think about the size of things that need to cover part of the screen. Particularly you can get into trouble with animations built with visual states, which tend to have fixed number in them. I already dabbled into this when I ported Two Phone Pong to Windows 8.1 and had to make a screen-size independent scroll-into-view pane.

Now, for a demo app I have been working on, I wanted to make a popup that always used 1/3th of the screen. That used to be easy, as we had only one resolution, more or less, and for the rest Windows Phone 8 did some auto scaling. Now it needs a little more work. Very little, as it turned out I almost had all the pieces in place:

The only thing that was missing was this very simple converter:

So now I can define a simple app with a map (for instance), and when the popup is displayed, it always takes the bottom third of the screen. Regardless of screen resolution. 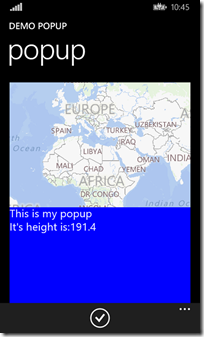 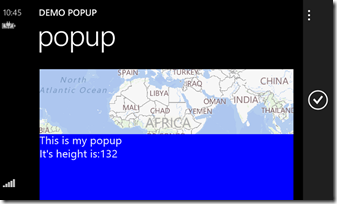 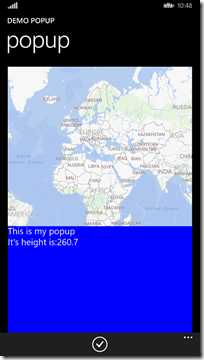 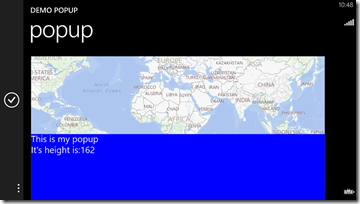 Added bonus: the popup resizes automatically as you rotate the phone. It always takes the bottom third of the screen.

The way to achieve this is pretty simple:

I have included a small demo solution to show off this little trick. It uses my pre-release version of WpWinNl2.0.x and a little MVVMLight, but you could use this just as easy from a non-MVVM app. But I still think the beauty of this all is that can be initiated from a viewmodel ;)

In addition, although the demo solution only contains a Windows Phone app, this trick works just as well as on Windows Store apps, as both UnfoldBehavior and SizeListenerBehavior are already in the new WpWinNl NuGet package.