What are Scalability, Consistency, and Availability?

How Does the Scalability of a System Differ From the Performance of the System?

Scalability and performance are related but different concepts and we need to understand what the difference is.

Performance has a limit on reducing the response time, and we will eventually reach that limit. Whereas, scalability has no theoretical limit. We may be restricted by the implementation, but in a perfectly scalable system, we could scale forever.

So when we build Reactive Micro-services we tend to focus on improving scalability than improving performance.

How Can We Measure Scalability and Performance of a System?

Measurement like requests-per-second measures both. This makes it a valuable metric because we can use it to see whether we have improved our scalability or our performance. But it also means that it is somewhat restrictive in the sense that if it improves we can't tell which one changed. So if we want to know where that improvement came from then we have to track scalability and performance individually.

How Can We Explain Consistency in Distributed Systems?

Distributed systems are systems that are separated by space. This means the system could be deployed across multiple data centers or within the same data center, or just deployed to different hardware or the same hardware.

Information cannot be transferred instantaneously, it takes some time. Granted that time could be very small but there is an amount of time that elapses during the transfer of information. Within that time duration when the transfer of the information takes place, the state of the original sender may change.

The key here is to recognize that when we are dealing with a distributed system, we are always dealing with stale data. The reality is eventually consistent.

What Is Eventual Consistency?

When a system stops receiving updates at least for some time, we can guarantee that all parts of the system will eventually converge on the same state. Thus in this way, we can reach that level of consistency.

Traditional monolithic architectures are usually based around strong consistency they use a strongly consistent database like a SQL database.

What Is Strong Consistency?

When all members of a system agree on the state, before it becomes available, then we reach the level of strong consistency.

But when we introduce a lock, it introduces overhead in the form of contention. That overhead has consequences to our ability to be elastic, to be resilient, and it has other consequences as well.

Contention can be explained as when any two things contend for a single limited resource and are in competition with each other. That competition can only have one winner. This means that the others are forced to wait in line for the winner to complete.

As the number of things competing for increases, the time to free up the resources increases.

What Is Coherency Delay?

As the number of nodes increases, coherency delay also increases.

What Are the Laws of Scalability?

Amdahl's Law of Scalability:
Amdahl's' Law shows the effect of contention on a distributed system. The key part of Amdahl's Law is to recognize that contention limits parallelization. This law defines the maximum improvement gained by parallel processing. Improvements from parallelization are limited to the code that can be parallelized. So if we have pieces that can be parallelized we can improve those. The pieces that can't be parallelized, there's nothing we can do about it because we have that single limited resource that we are contending for. Amdahl's Law demonstrates that when we have contention, and we try to add concurrency or scale up the system, we start to see diminishing returns.

Gunther's Law of Scalability:
Gunther's law shows the effect of contention as well as the effect of coherency delay on a distributed system. Gunther's law demonstrates that as we scale up the system, we need more communication and coordination between all the nodes, as a result, we eventually reach a point where the cost of that communication and coordination exceeds any benefits gained from scaling up. This Law shows that increasing concurrency can cause negative returns due to contention and coherency delay. This reduces our ability to parallelization.

Reactive systems understand the limitations that are imposed by these laws. We try to minimize their impact by trying to exploit them rather than avoiding them.

How Can We Reduce the Impact of Laws of Scalability on Reactive Systems?

Thus by avoiding contention and coherency delay, we can achieve higher scalability. The goal here is to reduce or eliminate the things that prevent scalability in reactive systems.

What Is CAP Theorem?

CAP Theorem states that in a distributed system we cannot provide more than two of the following:
i. consistency,
ii. availability
iii. partition tolerance.

Partition Tolerance states that the system continues to run, despite the number of messages being delayed by the network between nodes. In such a condition our system can sustain any amount of data without any failure.

Here is a Venn diagram to illustrate the CAP theorem: 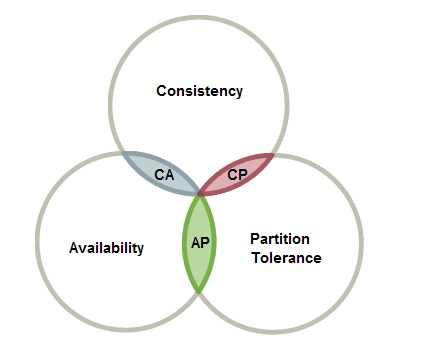 When a partition occurs, a distributed system has 2 options: