Digital transformation is having a “perfect storm” effect on IT organizations leading to a greater diversity in scale and types of users, apps, and locations, resulting in higher operational complexity and greater security risks that enterprises have to manage. The stark reality, however, is that these companies will not have the time to build and deploy these apps by using a traditional development model and then separating the roll-out into several long phases, as in traditional multi-year IT transformations.

This journey toward digital transformation has taken IT to an inflection point—deploying sophisticated tools isn’t enough; being lean and agile is the way to go. In other words, IT needs an “Easy Button” to deploy the necessary infrastructure however or for whoever needs it and at the speed of business, not the pace of legacy IT.

DevOps has emerged to be the preferred operational model to support these new requirements. This is based on the fundamental need to better develop, deploy, and manage both traditional and emerging enterprise apps, which are based on a microservices architecture and deployed across traditional data centers and in the cloud. Accordingly, the underlying infrastructure has to adapt in order to support the requirements of these new apps and services.

This will only be possible by evolving data center infrastructure and moving it to the cloud, so it can be programmable, open, and flexible. Only through this approach will enterprises be able to develop, test, and deploy applications faster and more cost efficiently in accordance with the DevOps model.

This article explores some of the critical steps required for enterprises to get there.

Ultimately, this journey must begin with the acknowledgment that today’s end-users such as app developers care about infrastructure, but choose to let other organizations, namely IT Operations, worry about it. Instead, app developers choose to focus on the app itself and the user experience it delivers. This explains the growing adoption of public cloud services within enterprises, even at the detriment of higher total cost of ownership.

However, app developers and other technology-savvy users are, at the end, pragmatists who want self-service, simplicity, and flexibility for their infrastructure, irrespective of how or who delivers it. Indeed, according to an Intel executive who spoke at the recent Cisco Live! Vegas keynote event, deployment of public cloud-native workloads will top out around 40 percent, meaning the rest will be resident in enterprise private cloud or data centers.

This presents an opportunity for enterprise IT and DevOps organizations to reshape their roles from merely building and managing infrastructure to that of security-driven cloud services brokers. Furthermore, there is an opportunity for enterprises to adopt next-generation architectures such as a hybrid-cloud stack model built on a programmable policy-driven infrastructure foundation. This automation simplifies operations and gives IT teams their “easy button.” Other layers (hybrid cloud orchestration and cloud-native stacks, infrastructure and its management layers) of this stack can support just about any kind of data-driven app imaginable including IoT, mobile, hyperscale, and other vertical use cases.

At 10:10 min, listen to Cisco CTO/SVP, Zorawar Biri Singh, at Path to Cloud (2016 Las Vegas) talk about next-generation stacks in the data center.

Automation, analytics, and simplicity are the keys for success to deploy apps at the speed of software in this next-gen hybrid-cloud stack. This is especially true for resources located in on-premise data centers which will maintain a critical role in the innovation cycle that is emerging in enterprises today where ideas are sparked in the cloud but operationalized inside enterprise data centers. 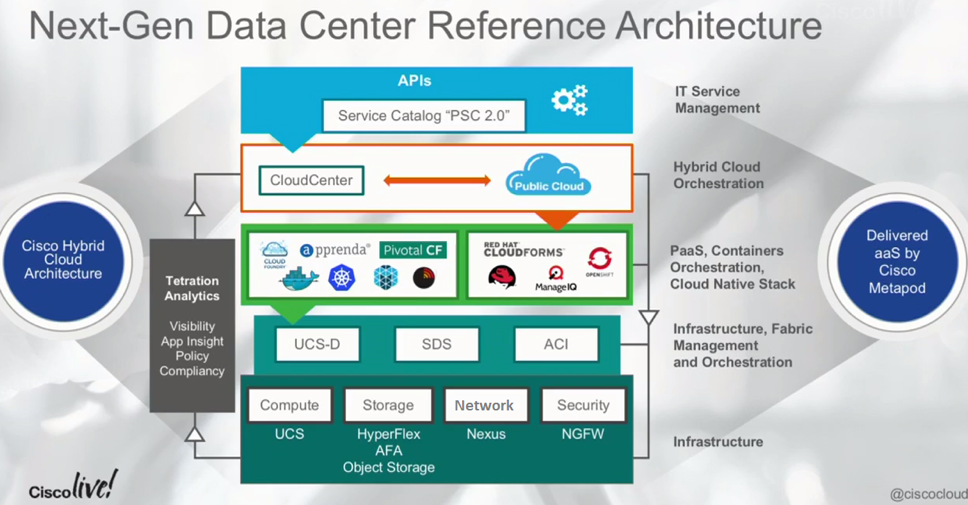 Fortunately, new classes of software-based automation, analytics, and management tools are readily available today to help abstract the complexity out of infrastructure and making it more easily deployable through self-service, on-demand consumption models that are completely transparent to the app developers and other users. In turn, this also requires a mindset shift among IT pros to look more holistically at its infrastructure, which will be built using a mix of on-prem and private/managed/public cloud resources.

The Power of Open

Another critical path toward making infrastructure simpler, smarter, and more automated will be through the use of open source technologies, open APIs, and developer-enabling tools. These open technologies make infrastructure easy to use when all the layers are based on a common application policy model. Cisco maintains a firm commitment to open source projects and technologies with a decades-long track record of active participation and contributions including as a top contributor to Linux.

Cisco is also demonstrating its commitment as a driving force behind open-source innovations with the recent success of Project Contiv. Contiv is designed to make infrastructure more responsive and policy-driven even as microservices applications scale to hyperscale realms. It creates the framework for users to define operational policies for infrastructure specifically for containerized applications at a granular level, including setting network, compute, and storage-specific policies for these virtual apps. 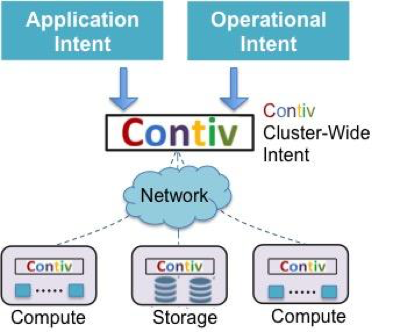 Again, automation is a key enabler with Contiv technology offering the ability to set automated policies across both the physical and software aspects of the infrastructure. Thus, Contiv and other breakthrough technologies like it continue to reinforce the value of the next-gen hybrid-cloud stack model.

Digital transformation holds great promise in fundamentally redefining the customer experience and drive new revenue streams for companies of all sizes. For most enterprises, however, the gating factor for a successful digital transformation will be how effectively and quickly they can adapt their existing technology strategies and practices to enable the modern-day, microservices-based apps that drive today’s hyperscale economy.

This requires enterprises to rethink how they view data centers and infrastructure in general, from resources they own to ones they rent or even share. The goal is to enable developers and other end-users to leverage infrastructure pools as fast and simple as possible while maintaining the security and operational excellence that enterprises depend on to run their businesses. This is why the next-gen hybrid cloud stack will be the preferred architecture for the microservices app world.

5 Technology Trends That Will Change Enterprise Software in 2018

Why Did Kubernetes Win?