Real-Time Responses Can Make or Break Your App

The world as we know it is changing at a speed we’ve never seen before. The best application user experience requires blazing fast response times in the range of a tenth of a second. If you factor in 50 milliseconds for an average acceptable Internet round trip response time, that means your application should process data and return responses in the remaining 50 milliseconds. This in turn requires sub-millisecond database response times, particularly if you’re handling thousands of simultaneous requests. Only the most nimble yet versatile databases can satisfy this need for speed.

In big data processing scenarios, where insights must be gleaned and decisions made rapidly, in-memory databases can cut processing times from hours or minutes to seconds without complex optimizations or compromises. But there are a lot of myths about in-memory databases. Most people think they are unreliable, inconsistent and expensive. But most of all they think it is enough to run any kind of database in memory to get the speed they need.

This is simply not true. Even though most in-memory databases are written in efficient programming languages such as C or C++, they vary in responsiveness because:

Single-threaded-ness offers a drastically simpler execution model that is lock-free and therefore comes with a much lower computational cost, but this shifts the responsibility of managing the compute resources to the operator/user. The ideal solution, of course, is one wherein the operator/user doesn’t have to worry about the compute resource management, because database management is provided in a way that is not onerously resource-intensive.

If throughput and latency are your primary yardsticks, then you should choose a database that maximizes throughput at a consistent sub-millisecond latency with the minimum number of servers needed.

The figures below show the performance differences between several in-memory NoSQL databases running in a real world scenario. 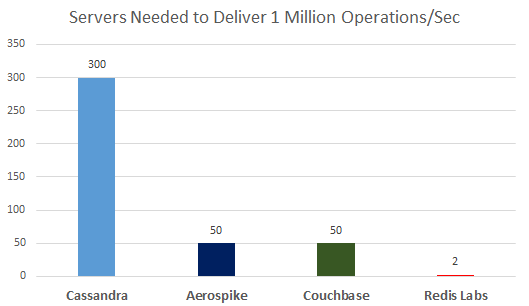 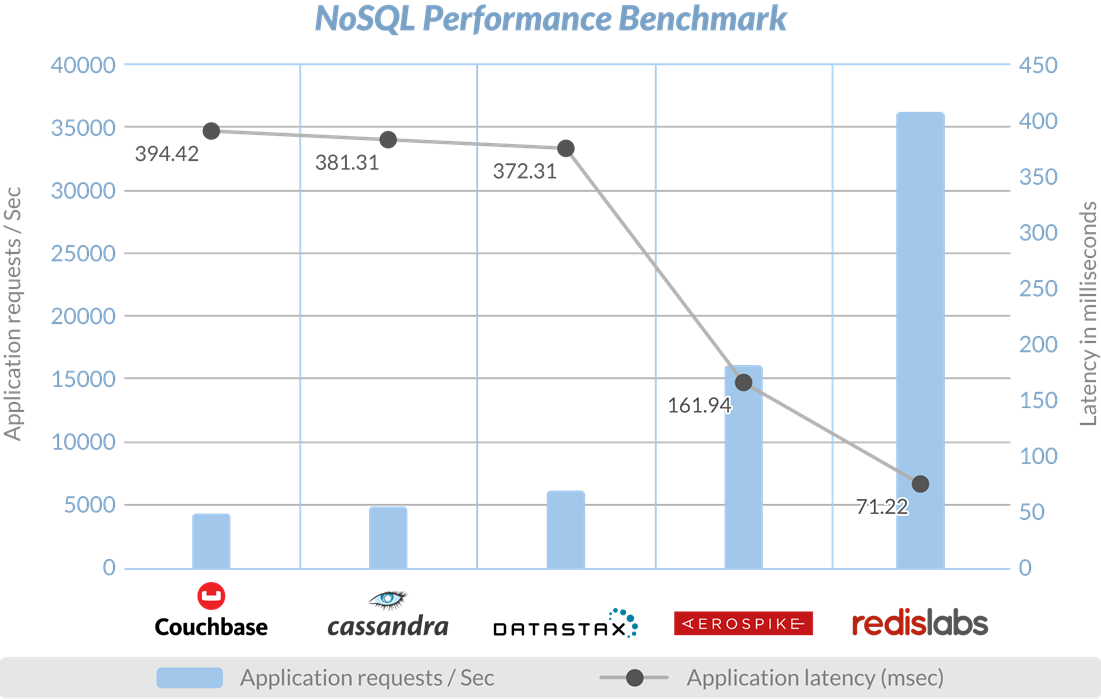 Most NoSQL databases (not just the in-memory ones) provide acknowledgements (ack) to the client before they commit data to the disk or to the replica. Therefore it’s possible that an outage could leave data in an inconsistent state.

Picking a CP model database means developers don’t have to worry about consistency but ‘write’ commands are not allowed during network split events.

Picking an AP model means that the database is still available for both ‘write’ and ‘read’ commands under network partition, but the developers have to write application code to ensure consistency rather than having the database enforce it.

Just pick the right database model depending on your use case.

There are a couple of ways to think about scale. You can scale up by upgrading the servers that host your database (e.g. adding more RAM or cores). Or you can scale out by adding more servers to your in-memory cluster. With some databases, you can run multiple slices (or shards) of the same dataset on the same node, thereby delaying the need to add more nodes by utilizing all existing cores first. You can also treat memory across multiple servers as a single, shared pool, thereby enabling scaling outside the limitations of single-node memory. Some in-memory databases today allow you to scale your database up/down or out/in, in a seamless manner that maximizes the responsiveness of your applications by dynamically increasing the number of cores and memory nodes allocated for your database operation.

Any use case that needs fast throughput raises the question: “Exactly how many resources are needed for a certain level of throughput?” For example, an in-memory database that serves 1.5 million operations/sec with a single Amazon EC2 instance is way cheaper to run than alternative databases that may not run in-memory (and might be cheaper in terms of disk resource per server), but end up using tens of servers to get the same throughput.

If your dataset runs to several TBs and the cost of memory becomes an issue, there are now technical innovations that make it possible to use flash memory as a RAM-extender, making the cost of such a solution 10 times cheaper than purely in-memory. Keep in mind that Flash as a RAM extension will impact performance to some extent, so the ideal technology here is one that allows the user to define their RAM/Flash ratio to get to the desired price/performance. RLEC from Redis Labs provides this type of configurability.

In-memory computing options have evolved over the last few years to be reliable, consistent, highly scalable and inexpensive. Sub-tenths-of-a-second latency for databases and minutes for analytic processing times are becoming the de facto industry standard. To keep up with your competition and to deliver the best possible application user experience, data architects must incorporate in-memory computing into their application stack.

Note: Download the independent benchmarks mentioned in the article here.