a couple of months ago, i wrote an article about caching in wcf using the in-process memory cache available in the .net 4.0 framework. this component offers a lightweight caching solution that can easily be integrated in various types of .net applications.

microsoft offers a distributed cache as part of windows server appfabric. this cache can be installed on window server 2008 and higher. it is also available in the cloud on windows azure. the appfabric cache is a distributed out of process cache; this means that the cache can be shared among multiple servers and applications. because it runs outside the application process, it can survive application shut downs and it can be larger then 4 gb for 32-bit applications. 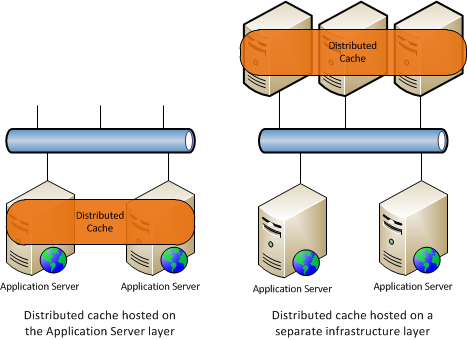 appfabric can be download for free from the microsoft download site. at the moment of writing, the latest version available is appfabric 1.1. it requires at least windows vista or windows server 2008. for testing the appfabric cache, i have setup a windows server 2008 r2 vm configured in workgroup modus. i choose to deploy my wcf service, on a separate server.

please note: the configuration of appfabric is different in case your servers are part of an ad domain. then you don’t need to setup a network share or separate technical accounts on each server. most companies should have an ad domain. please consult the appfabric msdn pages for more information. i recommend to only use appfabric caching in workgroup mode in a sandboxed test environment. otherwise, always use it in ad mode if possible.

appfabric consists of two parts, the hosting features and the distributed cache. because this article is about caching, i only installed the necessary caching features. 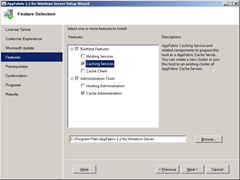 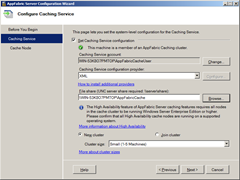 after this is done, press “next” to continue to following screen. on this screen, we can change the network ports if needed. i choose to stick with the defaults. 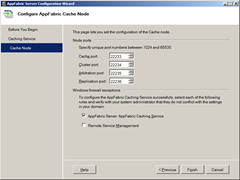 now this is done, we can start our cache using the powershell. in order to do this, launch the “caching administration windows powershell” and enter the following command: start-cachecluster .

by default, security is enabled on the cache. so we must grant access to our client. because i run in workgroup modus, i must create an account on my server with the exact same user name and password as will be used by my wcf service on the appfabric caching client. granting access to a user account can be done with the following command: grant-cacheallowedclientaccount -account “youruseraccountname” .

please note: in case of an ad domain is available, the user account must not be created on the server. it is sufficient that the account is known in ad.

on the client, the client at least the “cache client” of appfabric must be installed. no special configuration is required. 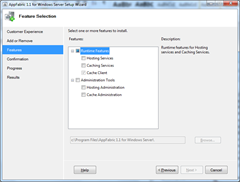 for the sake of simplicity, i kept the actual programming code to the strict minimum. the sample wcf application consists of two components: a (slow) repository and a wcf service.

first we must add a reference to two dll’s installed by the appfabric installer. they can be found in the installation folder of appfabric. 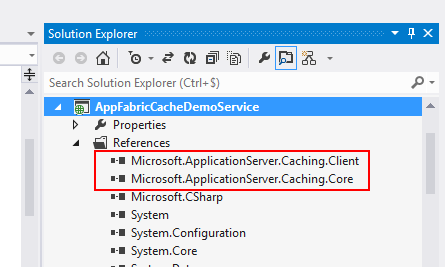