It feels like every week there's a tragic news item about a school shooting in the US — at least to those of us overseas. Since 2009, there have been over 288 school shootings in the U.S, and this year, approximately, there has been at least one shooting a week. We've heard a plethora of proposed solutions — from changing gun laws, mental health services, and arming teachers and even students (nice one, Sasha Baron Cohen.) A Cleveland company has come up with a new proposal: a gun detecting robot.

It's the brainchild of Intellitronix, a wholly-owned subsidiary of US Lighting Group for whom the robots are a pivot from their traditional business: the production of LED gauges for vehicles. The actual robots are created by Russian company Promobot who has their robots working in 26 countries. They are used in various fields and can be consultants, building managers, and guides in public spaces and retail services, not unlike the service capacities of SoftBank's Pepper robot. There's even a Promobot police officer in Kazakhstan. 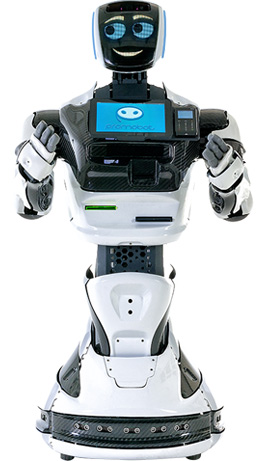 However, the functionalities of Promobot v4 are perhaps closer to that deployed in Knightscope's security robots that use facial, image and pattern recognition, infrared scanning, alarms, and communications in security roles in shopping centers and businesses. I spoke to founder and CBDO of Promobot LLC, Oleg Kivokurtsev, to find out more. He explained that:

"The robot has a special neural network that is trained to recognize different types of weapons: rifles, shotguns, pistols. With the camera on the body, Promobot receives and analyzes the incoming video stream. Finding the weapon, the robot sends notifications to the police and the parents of the students at the school and gives a loud alarm. It does not interfere with shooting, its function is to inform about it, something that can save lives."

The weapons detection utilizes IBM Watson. The robot takes a picture, sends it to IBM, Watson analyzes it, and, within 4 seconds, gets it back. Furthermore, the robot uses artificial intelligence to determine the differences between men and women, age range, and has the capability of facial recognition for up to 5,000 people. I was curious how customizable Promobot 4 was, Oleg explained:

"The neural network of the robot is loaded with a large amount of data about the weapons. Today, the relevant databases are available; they are installed in the robot. Employees are constantly working on the quality of recognition to create conditions that hinder detection, thereby improving it.

In general, the robot has an SDK, so for the Promobot, you can create special applications and integrate the robot with external systems and devices. For example, "for use in retail, the robot integrates with the product base and can advise customers on the assortment. It can also be equipped with a bank terminal and a barcode reader, which enables express purchases through a robot." explained Oleg.

A Robot in Every School?

More than 2,800 Promobots will be supplied to the U.S. in the next five years, and schools are one of the main consumers. Negotiations are currently underway with individual educational institutions in the United States. In addition to identifying threats, the robot can be in demand in the educational process, because it is able to build communication and maintain a dialogue.

Like it's contemporaries, the open-software platform of the robot means many solutions for any purpose can be implemented on the Promobot.

Robot makers promise an awful lot. Yet, I can't help feeling that most commercial robots are pretty much a smiling iPad on wheels that play party tricks, like dancing, simple greetings, or an Alexa interface. The Promobot isn't cheap. Oleg suggests it would cost $50,000 to put one in a school. But, in addition to identifying threats, the robot can be used for educational purposes, including language tuition and robotics programming. Intellitronix is developing a robotics curriculum for Willoughby-Eastlake Schools’ School of Innovation.

An Effective Use of Robotics?

The problem I have with this kind of robot is their efficacy in practice. I wonder, at present, whether they would be more or less effective than a metal detector in preventing guns from entering a school. Furthermore, what is the range of detection — for example, if a gun is concealed in a roof attic or another part of the school at a distance, could it be detected? Oleg admits that, at present, the robots are unable to detect concealed weapons, but it is something they expect to be rectified this year.

It's an issue that absolutely needs a solution, but I'm not sure if robots are the best option. They're expensive, most likely pretty slow and very expensive.