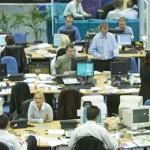 as an introverted person, it’s easy to believe that the modern office is designed to harm your attempts to work. the hustle and bustle of an open plan office, with its incessant noise and chatter, disrupt even the most diligent of people, let alone those who thrive on a bit of peace and quiet.

this was certainly the finding of a recent study into office working. the study revealed that the modern office is usually much more suited to extroverts than it is to introverts. the extroverted members of the group were generally much happier and reported higher levels of job satisfaction.

why we tend to make things worse

what’s more, new policies by facilities managers tend to exacerbate things rather than improve them. for instance, hot desking was widely reviled by everyone, whilst having ample quiet areas to go and focus were widely sought after but seldom offered.

“these results support previous research into the unpopularity of open-plan offices and hot-desking and the positive effects of personalisation. however, there are some simple changes that can be made to improve staff satisfaction and increase productivity,” the authors say.

so you might think being able to hunt down that oasis of calm in your office could be especially valuable for the introverted within your workforce, and that is exactly what a recent app from architecture company nbbj sets out to do.

the company has developed a sensor-based network that alerts users, via a smartphone app, of the optimal place for them to work based upon the preferences they enter into the system. it takes into account things such as noise, heat, and light to find the best match.

the sensors are installed onto lights or other ceiling based structures and provide real-time information to users in addition to the more aggregated office usage patterns for facilities managers.

it’s an interesting approach, and whilst to date this system is only installed in nbbj’s office, the potential is evident. an equally innovative solution was proposed by researchers from rensselaer polytechnic institute last year .

many offices come with a low-level white noise system that is designed to stop noise from spreading throughout the system.

the researchers wanted to test if they could use a form of masking signal that not only helps to block out the noise of open plan offices, but also helps to make us more productive. so rather than piping white noise into the office, they began to pipe in natural sounds instead. the hypothesis they were testing was that people would focus more intently in such an environment, thus improving their productivity.

the results revealed that those exposed to the sound of the mountain stream were both more productive and generally happier than their peers who were exposed to more traditional office noises, both of the unmasked office din and the white noise based masking signal.

we’re still a long way from building workplaces fit for introverts, but there are at least some interesting possibilities being proposed.