I’ve written previously about SlashData’s Developer Economics: State of the Developer Nation reports, which reveal the latest trends from developers working on mobile, desktop, IoT, cloud, web, games, augmented and virtual reality, and machine learning. The 14th global report is available now, and makes interesting reading, reflecting on the views of over 21,700 developers across 169 countries.

Last time, I wrote about developers’ views on AI, and this time, I thought I’d highlight some of the trends in virtual reality and augmented reality development. But, first things first. In case you’re not sure of the distinction between the “realities”, let’s introduce them!

Virtual Reality (VR) and Augmented Reality (AR) are technologies that sit at two ends of a spectrum of experiences that alter our perception of the world.

I found a nice definition from the Cramer brand experience agency.

“Virtual reality is able to transpose the user. In other words, bring us some place else. Through closed visors or goggles, VR blocks out the room and puts our presence elsewhere...Augmented reality however, takes our current reality and adds something to it. It does not move us elsewhere. It simply "augments" our current state of presence…”

Many consider AR/VR to be a revolution-in-waiting, as Paul Reynolds described recently in his interview with me here on DZone.

As users, we’re searching for more than just hardware that performs well at an attractive price, we also want great applications and experiences on that hardware. It’s no good if we can’t do anything much with it. This leads to a chicken and egg problem for developers who are working on AR/VR apps, because they need to evaluate which hardware to commit to develop upon. Developers want to target the best-selling hardware to get the most sales. When everyone chooses the same hardware, it gets the biggest number and best apps, and that attracts consumers to buy it!

The underlying technology necessary for AR/VR is still quite immature and is currently undergoing rapid evolution. So how do developers know where to focus their attention? Maybe the data from the recent SlashData report will give us some clues...

To make it fully immersive, VR is delivered through headsets and the most powerful of these are dedicated headsets, such as the Oculus Rift, which is purchased mostly by a niche audience of early adopters. Games are a great use case for VR, so dedicated headsets are popular programming targets for games developers, but because the headsets aren’t yet in mainstream consumer use, they are less popular with a more general developer population.

Here are the stats from the report:

The alternative to a dedicated VR headset is to use a smartphone that sits inside a cheap headset, purchased separately. This approach may not be so powerful, but it has an established user base, so it attracts developers. Examples of this model include Google’s Cardboard, and the follow-up product from Google, Daydream View, which is built into Android (version Nougat and later).

Here are the stats from the report:

VR has a bit of a usability problem because it is fully immersive, so cannot be used on the move unless the user is fully aware of obstacles to their safety. That means blending computer-generated imagery with the real world, taking the product closer towards mixed reality or AR.

Dedicated wearable hardware for AR has a similar problem to that of VR hardware - it’s still something of a niche and appeals to early adopter or specific target groups. There are three front-runners attempting to lure developers to create apps for their products: Microsoft, Google, and Magic Leap.

While VR is hampered by the power and form factor of mobile, AR is better suited to running on smartphones. Since there is clearly an established audience for smartphone users, this is where many developers are concentrating their AR efforts.

Google and Apple have each released SDKs with AR built-in for Android and iOS respectively.  Apple launched ARKit with iOS11 in Q3 2017. It offers AR to all iPhones from the 6S onwards. Google’s ARCore v1.0 officially launched in Q1 2018, and is available in existing handsets such as Samsung’s Galaxy S8 and Google’s Pixel range of smartphones, with other manufacturers partnering to ensure ARCore support in handsets upcoming in 2018.

Stats from the report:

Here is a graphic from SlashData’s report, illustrating the uptake of various AR devices and platforms over the last 4 surveys by all developers who say they have been working with AR. 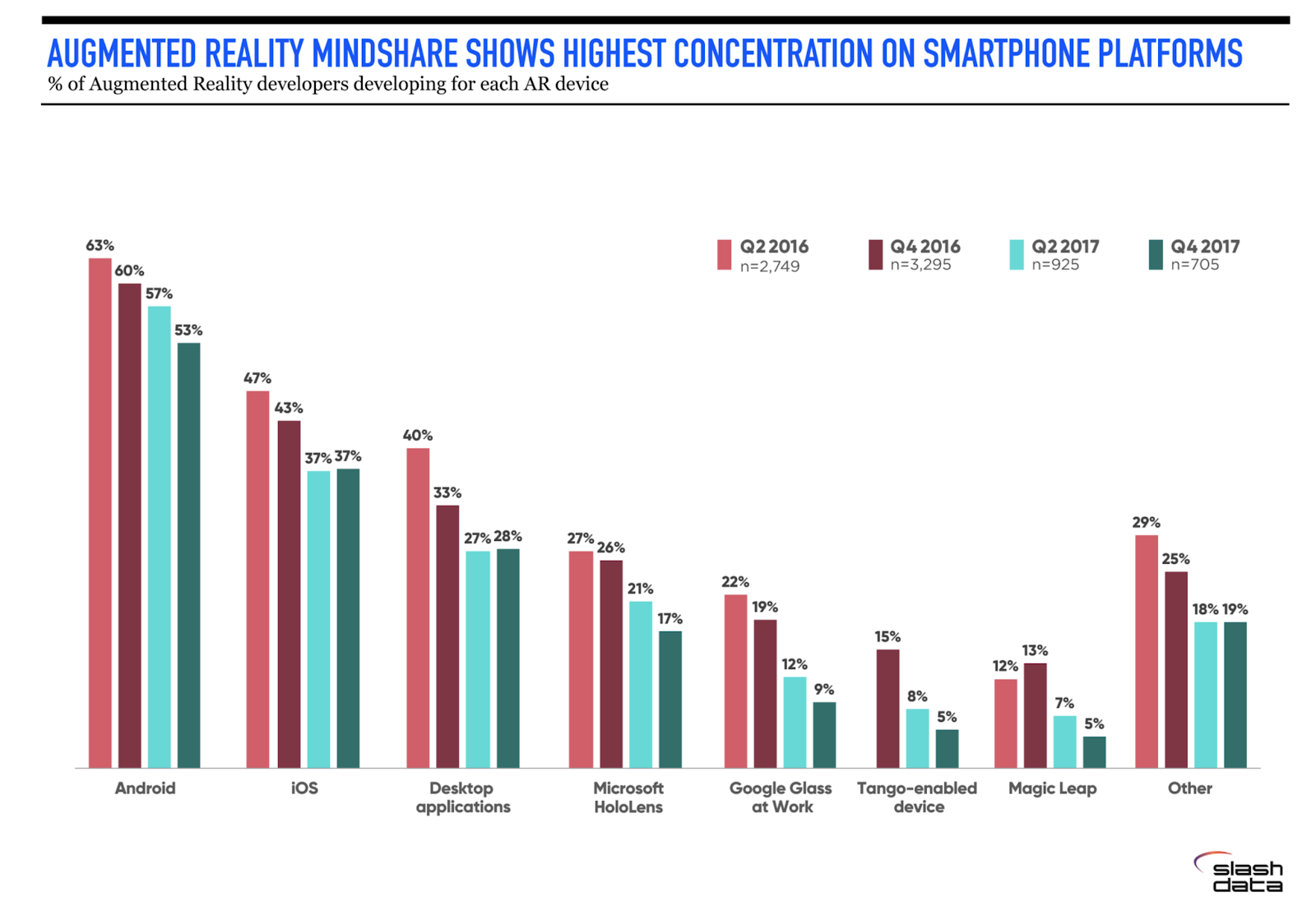 Before I close, let’s consider just how many developers are working on AR/VR today:

I find it quite astonishing that almost one in five of us developers is working in this new field. Have you recently started on an AR or VR project? What is your experience and where do you think the technology and experiences are headed? Hit me up in the comments section - I’d love to know and discuss your thoughts!

I’d like to thank SlashData for allowing me to reproduce the graphic above and report on their survey data. If you’d like to share your insight as a developer, the latest survey is open right now - why not submit your thoughts and maybe win a prize?

How Useful Are Google's AR Guidelines?