I've wanted to create a system which in its core uses event sourcing ever since I read Martin Kleppmann’s Making Sense of Stream Processing. The book is really amazing. Martin explains all concepts from their basic building blocks in a really simple, understandable way. I recommend this book to everyone.

The idea is to have a running Cassandra cluster and to evolve a system with no downtime in such a way that Kafka is the source of truth with immutable facts. Every other system (in this case, the Cassandra cluster) should use these facts and aggregate/transform them for its purpose. Also, since all facts are in Kafka, it should be easy to drop the whole database, index, cache, or any other data system and recreate it from scratch again. 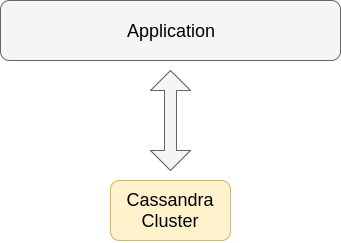 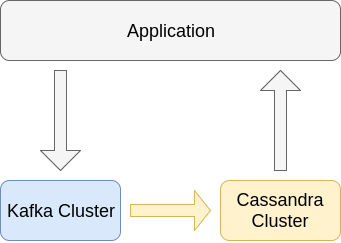 When observing the diagrams, it seems like a pretty straightforward and trivial thing to do. But there’s more to it, especially when you want to do it with no downtime.

I tried to break down the evolution process to a few conceptual steps. Here's what I came up with:

Well, that’s the plan, so we’ll see whether it is doable or not.

There are a few reasons why I’ve chosen to evolve an existing system instead of building one the way I want from scratch:

Since writing about this in a single post would render quite a huge post, I’ve decided to split it into a few, I’m still not sure how many, but I’ll start and see where it takes me. Bear with me.

I’ll start with a data model. Actually, it is just one simple table, but it should be enough to demonstrate the idea. The following CQL code describes the table.

In order to satisfy the first item from the evolution breakdown, I need a way to push each Cassandra change to Kafka with a timestamp. There are a few ways to do it: Cassandra Triggers, Cassandra CDC, Cassandra Custom Secondary Index, and possibly some other ways, but I’ll investigate only these three.

For this approach, I’ll use two Cassandra 3.11.0 nodes, two Kafka 0.10.1.1 nodes, and one Zookeeper 3.4.6. Every node will run in a separate Docker container. I decided to use Docker since it keeps my machine clean and it is easy to recreate infrastructure.

To create a trigger in Cassandra, ITrigger interface needs to be implemented. The interface itself is pretty simple:

That’s all there is to it. The interface has been changed since Cassandra 3.0. Earlier versions of Cassandra used the following interface:

Besides that, augment method is called exactly once per update and the Partition object contains all relevant information about the update. You might notice that return type is not void but rather a collection of mutations. This way, the trigger can be implemented to perform some additional changes when certain criteria are met. But since I just want to propagate data to Kafka, I’ll just read the update information, send it to Kafka, and return empty mutation collection. In order not to pollute this article with a huge amount of code, I’ve created a Maven project that creates a JAR file.

I’ll try to explain the code in the project. Firstly, there is a FILE_PATH constant, which points to /etc/cassandra/triggers/KafkaTrigger.yml and this is where YAML configuration for the trigger class needs to be. It should contain configuration options for Kafka brokers and for topic name. The file is pretty simple since the whole thing contains just two lines:

I’ll come to that later when we build our Docker images. Next, there is a constructor which initializes the Kafka producer and ThreadPoolExecutor. I could have done it without ThreadPoolExecutor, but the reason for it is that the trigger augment call is on Cassandra’s write path. In that way, it impacts Cassandra’s write performances. To minimize that, I’ve moved trigger execution to background threads. This is doable in this case since I'm not making any mutations — I can just start the execution in another thread and return an empty list of mutations immediately. If the trigger needs to make a mutation based on partition changes, that would need to happen in the same thread.

Reading data from partition update in augment method is really a mess. Cassandra API is not that intuitive and I went through a real struggle to read all the necessary information. There are a few different ways to update a partition in Cassandra, and these are ones I’ve covered:

A simplified algorithm would be:

In each case, JSON is generated and sent to Kafka. Each message contains enough information to recreate Cassandra CQL query from it.

Besides that, there are a few helper methods for reading the YAML configuration and that is all.

In order to test everything, I’ve chosen Docker, as stated earlier. I’m using Cassandra Docker image with 3.11.0 tag. But since the JAR file and KafkaTrigger.yml need to be copied into the Docker container, there are two options:

The first option is not really an option, actually. It's not in the spirit of Docker to do such a thing so I will go with the second option.

Create a cluster directory somewhere and a Cassandra directory within it:

The cluster directory will be needed for later. For, now just create KafkaTrigger.yml in Cassandra directory with the content I provided earlier. Also, the built JAR file (cassandra-trigger-0.0.1-SNAPSHOT.jar) needs to be copied here. To build all that into Docker, I created a Dockerfile with the following content:

In the console, just position yourself in the Cassandra directory and run:

That will create a Docker image with the name trigger-cassandra.

My Docker compose file is located in the cluster directory. It’s named cluster.yml and it looks like this:

The cluster contains the definition for ZooKeeper, Kafka, and Cassandra with the exception that there are two Cassandra services. The reason for that is that one can be stand-alone but all others need a seed list. cassandra-seed will serve as a seed and Cassandra as scalable service. That way, I can start multiple instances of Cassandra. However, to start multiple instances, it takes time, and it is not recommended to have multiple Cassandra nodes in joining state. So, scaling should be done one node at a time. That does not apply to Kafka nodes. With the following command, I’ve got a running cluster ready for use:

After that, I connected to the Cassandra cluster with cqlsh and created the keyspace and table.

To add a trigger to the table, you need to execute the following command:

If you get the following error:

There are several things that can be wrong. The JAR file might not be loaded within the Cassandra node; that should happen automatically, but if it doesn’t you can try to load it with:

If the problem persists, it might be that the configuration file is not at a proper location, but that can only happen if you are using a different infrastructure setup and you forgot to copy KafkaTrigger.yml to the proper location. Cassandra will show the same error even if the class is found but there is some problem instantiating it or casting it to the ITrigger interface. Also, make sure that you implemented the ITrigger interface from the right Cassandra version (versions of Cassandra in the JAR file and of the Cassandra node should match).

If there are no errors, the trigger is created properly. This can be checked by executing the following CQL commands:

I used kafka-console-consumer to see if messages end up in Kafka, but any other option is good enough. Here are a few things I tried and the results they gave me.

For most cases, not all of these mutations are used — usually it’s just insert, update, and one kind of delete. Here, I intentionally tried several ways since it might come in handy to someone. If you have a simpler table use case, you might be able to simplify the trigger code as well.

What is also worth noting is that triggers execute only on a coordinator node; they have nothing to do with data ownership nor replication and the JAR file needs to be on every node that can become a coordinator.

This is okay for testing purposes, but for this experiment to have any value, I will simulate the mutations to the Cassandra cluster at some rate. This can be accomplished in several ways, writing a custom small application, using Cassandra stress, or using some other tool. Here at SmartCat, we have developed a tool for such purpose. That is the easiest way for me to create load on a Cassandra cluster. The tool is called Berserker, you can give it a try.

To start with Berserker, I’ve downloaded the latest version (0.0.7 is the latest at the moment of writing) from here. And I’ve created a configuration file named configuration.yml.

The load-generator-configuration section is used to specify all other configurations. There, for every type of configuration, the name is specified in order for the Berserker to know which configuration parser to use in concrete sections. After that, a section for each configuration with parser specific options and format is found. There are following sections available:

In this case, the data-source-configuration section is actually a Ranger configuration format and can be found here.

An important part of this article is the connection-points property within worker-configuration. This will probably be different every time Docker compose creates a cluster. To see your connection points run:

It should give you a similar output:

Now that everything is settled, just run:

Berserker starts spamming the Cassandra cluster and in my terminal where kafka-console-consumer is running, I can see messages appearing, it seems everything is as expected, at least for now.

That’s all! Next time, I’ll talk about Cassandra CDC and maybe the custom secondary index. Hopefully, in a few blog posts, I’ll have the whole idea tested and running.