Earlier this year I wrote about Agile's perspective on failure. In that blog I indicated that my brother-in-law (a psychologist) sent me some of the latest research on failure. In particular, there were two fascinating studies that helped me understand why failure is indeed a cause for celebration. This is the first in a two part series. 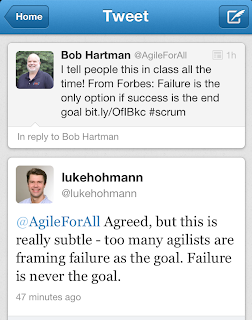 "We find that organizations learn more effectively from failures than successes"

In a 2010 study (more details at the bottom of this post) on the effects of failure and success on organizational learning, a team of researchers found that failure was a crucial ingredient for longer term success.

In order to find suitable organizational data to support their research they searched for and found an ideal candidate - the Orbital Launch industry. This industry was ideal for the following factors:


(Note: The Orbital Launch industry is responsible for sending rockets into space to place a payload into orbit around the earth.)

As researchers their goal was to look at the causes of improved organizational performance. Did success drive improvements? What part did failure play in future success? Here are a few of their key findings:


As many people like Luke have pointed out - failure isn't the goal. However, when it happens we can either run from it or celebrate it. The evidence from the Orbital Launch industry strongly suggests that celebrating failure is in order. For even more reason to celebrate, take a look at part 2.

You can get the full research from your neighbourhood grad student or PhD but here are a few more details on the studies mentioned above:

Failing to Learn? The Effects of Failure and Success on Organizational Learning in the Global Orbital Launch Vehicle Industry

Implications for Practice: "Failure is often difficult for organization members to cope with. Because failures - and those that appear to be involved in them - are often stigmatized, organization members frequently refuse to acknowledge failure, refrain from communitcating about it, or redefine it as success (March et al., 1991). Indeed, in Vaughan's (1996, 2005) analyses of the Challenger and Columbia disasters, she noted that the most significant organizational antecedent to both tragedies was the institutionalized practice of ignoring failures.

Nonetheless, given failure's central role in organizational learning shown here, organizations that stigmatize failure may be depriving themselves of major opportunities for improvement. Consequently, the most significant implication of this study of practice is that organization leaders should neither ignore failures nor stigmatize those involved with them; rather, leaders should treat failures as invaluable learning opportunities, encouraging the open sharing of information about them. Indeed, this suggestion dovetails with existing evidence that members of organization that treat failure nonpunitively report more errors, but experience fewer serious failures, than member of organizations that seek to assign blame for failures (Edmondson, 1999; Weick, Sutcliffe, & Obstfeld, 1999)."
Data (computing) agile Space (architecture) Sputnik (JavaScript conformance test) Profile (engineering) Baseline (budgeting) Notion (music software) Form (document) POST (HTTP)