Chaos and discipline, These two words are an oxymoron, you might be thinking, how can chaos make disciplined microservices?

But the universal truth is discipline means the absence of chaos, so until you have not experienced chaos you can not be disciplined.

If we think about the Law of Entropy, then chaos is the high entropy state, and discipline is the low entropy state. Always disciplined services degrade to chaotic ones to make the system in equilibrium, as the flow of the direction is from high (chaos) to low entropy (discipline) state. So chaos is inevitable.

Now, If we want to make sure our services remain in a low entropy state (discipline) throughout, we need to adopt a few special techniques. As per the laws of physics, this is an irreversible process (flow from low to high entropy state), it is going against entropy we called it reverse entropy (watch Christopher Nolan Masterpiece TNET!!!)

A refrigerator is a reverse entropy object (doing cooling), the crux is to maintain discipline in your services we need to adopt a Resilience strategy but the question is how to determine what resilience strategy needs to be adopted? For that, we have to experience chaos in production and act accordingly.

This is the essence of chaos engineering, by injecting mild fault into the system to experience the chaos and take preventive measures and self-healing against it.

Today I am talking about implementing chaos in production!!!!

After hearing this you might think what I am saying? Am I insane? I am encouraging implement chaos in production, which is the most emotional and sensitive area of a developer, we are all praying whatever the error comes, please those come before production. In production, if something goes wrong your organization's reputation at stake, your organization loses user base, revenue, etc., and I am encouraging you to implement Fault/Chaos.

But the irony is we have the wrong mindset, our mindset should be 'Failure is inevitable and we must prepare for it'. In this tutorial, I am advocating for this culture.

Microservice Architecture is distributed in nature and it consists of suites of small services which can be scaled and deployed independently.

If we deduce the above statement we will find 3 important things:

These points justify the 'Failure is inevitable and we must prepare for it' statement.

But the question is how do we prepare for it?

The answer is Chaos Engineering.

What is Chaos Engineering? 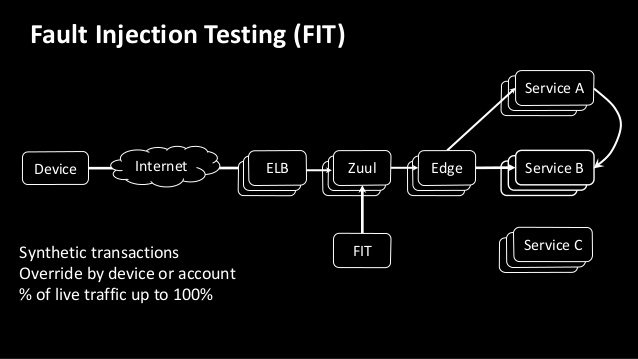 Now let’s discuss in terms of microservices what areas we should do chaos testing to see if our microservices are resilient and what resilience strategy we must follow to avoid downtime.

As Microservices are communicating over the network many types of failures we can encounter like the network is unstable, network load, DDoS attack. Delay during the call etc.

Hystrix is a suitable tool. By hystrix, we can ensure if one service is down rather than hammering that service we can take a default route, and give time to that service to recover.

We can introduce load/congestion or network delay in using Netflix FIT Framework in production to check how services are reacting, note that, In FIt we must have a separate Canary path for FIT testing where we can experiment roughly for 1% of the real-time user load and if service is not resilient we will terminate the test then there and reroute to the real path so that user does not experience any error. 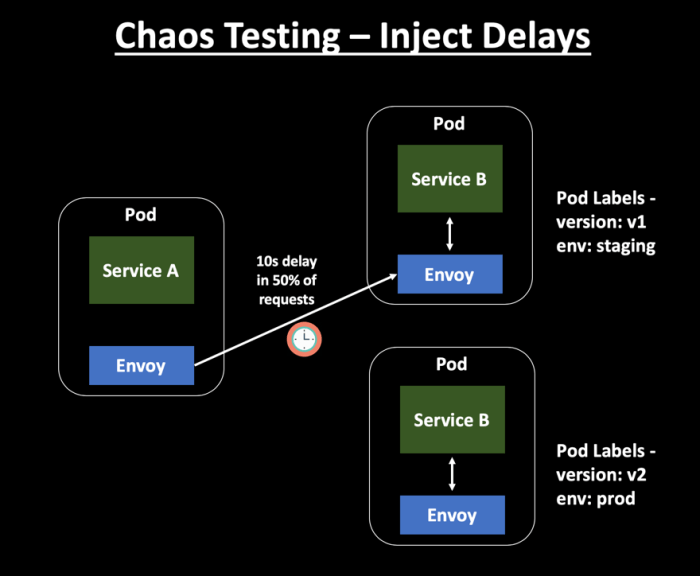 Microservice are calling each other to fulfill a business capability, so microservice dependency is a major factor, many types of failures we can predict like, dependent Service is not available, service not in a state to receive the request, one service fails as a cascading effect whole microservice service chain fail and crash, distributed cache unavailability, cache memory crash, single point of failure.

We will talk about the resilience strategy for all the above cases.

Hystrix is a Netflix OSS tool by which we can implement Circuit breaker patterns in the services, so if one dependent service fails for several requests it is better to not call it and take a default route so that the whole Microservices calling chains, not breaks and the user experience not getting stopped.

Another Resilience technique is to identify the critical services which are the heart of the Business and make sure if other services fail these services can run and can give users a minimal experience to carry on rather than halting the whole user experience.

In Real-time architecture we don’t always call the persistence layer it creates latency also all business features are not stateless we need shared data across multiple microservices so we are using cache techniques and do some sorts of orchestration in our code where if a request comes then we first check cache then data not available we call persistence layer and add the result to the cache for further requests.

Now, If Cache fails or acts as a single point of failure our services will fail, to avoid the same, we are using distributed caching with replication and the data must be replicated to different available zones so if one zone fails data can be retrieved for another available zone.

We need to adopt a Multi-region strategy for the persistence layer as well Microservices, If your Business spread over the Geography then as per architectural style we must have different data centers over the Geography say US North, US East, Asia Pacific, Europe etc.

Now the interesting thing is if your one data center serves one region say Asia pacific serves Asia, now if that datacenter goes down your all Asia pacific users affected so we must have Multi-region and failover strategy so if one region goes down it's user request can be shared by another region to have a resilience system.

To check Service is unavailable to introduce latency in the call to see how services react, we can use the Chaos Monkey framework and chaos toolkit to achieve that testing.

We can use Chaos Monkey and Chaos Gorilla to kill random nodes to see how services react assuming service multiple instances deployed in multiple nodes.

We have Chaos Kong which can takedown the entire region to check the Multi-region Failover strategy.

Generally, when we build a Microservices / distributed architecture, although we are saying to build stateless microservices it does not always happen we have to maintain statefulness due to business requirements like cart functionality, so we are adopting many techniques like server affinity or sticky session, once a request comes to a node load balancer makes sure that users further request will be processed by that node only, but this technique has some downsides, although your system is distributed you have multiple instances if that particular node goes down all the users served by that node will experienced error, which is not expected.

So we need to make sure our services should not have any server affinity. We can use distributed cache to store the stateful data or session also we can use request payload to append the state so data are available in the whole request cycle, which has been populated by different microservices.

In the case of cache also as I mentioned earlier data needs to be replicated in multiple regions if not then if one cache region went down all the users whose data stored by that region will be impacted, if we have replication, data can be available from other areas.

Another important thing is when we are adopting Horizontal scaling we must have to make sure it can auto-scale based on the load, we need to treat each node as cattle, not like pets, so if one node malfunctioned we can kill that node(I am against animal cruelty) and spawn another one automatically. Now If your services have server affinity or Load balancer works on sticky session strategy auto-scaling is not possible, so fix the same. Your organization's infrastructure must be capable of self-healing and spawning new nodes based on the load. So it is advisable to use containerization and container orchestrators like Kubernetes, Docker swarm to handle this.

To check whether your service has server affinity or not, you can randomly kill nodes by Chaos Monkey and chaos tool kit to see the outcome.

For infrastructure, we must need to have a Multi-Region strategy and failover mechanism, so that if one region's infrastructure goes down another region can serve that region's users.

Also, we need to choose Data center smartly so that two data center physical distance is not too much if it is so network hoping time increases so response time increases, but they Physically must be far apart so that natural calamities, Terrorist attack occur it should not impact both data centers.

Using Chaos Kong we can take down the entire region to see how failover works. 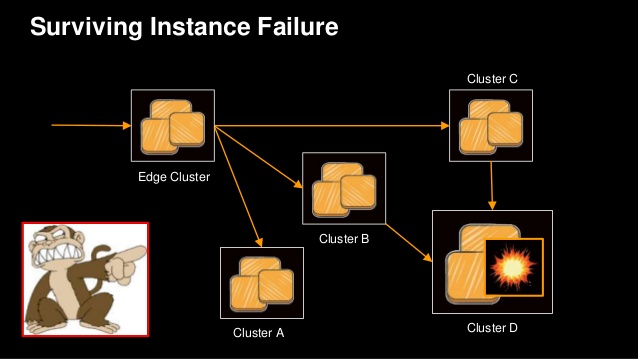 How to Adopt Chaos Engineering?

So before adopting it you need to spend money on Infrastructure, DevOps, and building Scalable architecture.

Below are some pointers to think about while adopting Chaos engineering in your system.

Chaos engineering advocates for checking how your system and developers are ready to handle real times issues. Often our system is not battle-tested against Load testing, region unavailable, critical services unavailability, although we are having some kind of load testing, integration testing done in the lower environment but that is not enough and the reason is,

"Our lower environment does not mimic production infrastructure."

So often developers have to battle against failure only in real-time without any preparation. There is no process in place, so developers are confused about what to do and that's why production failure is still a fear factor for all developers and infrastructure guys.

Having said that, by The Chaos Engineering, we are giving chance to developers and infrastructure guys to prepare themselves in real-time in Production itself, now they will be seasoned players and can handle the Production error without fear. This is the future mindset all organization needs to adopt as we are moving very fast, everyday new framework, tools are created every organization adopts them to break out from the old system, it gives organization enough flexibility in terms of scaling, resilience but on other hand, it complicates the architecture so without chaos engineering you can not be sustained.

"Chaos Engineering is the Vaccine of Complicated architecture, it helps to create antibodies and memorize them so in future if the same issues happen, those will be mitigated immediately."