I recently posted Chaos in Swift! Visualizing the Lorenz Attractor with Metal, which was inspired by a Houdini tweet from Erwin Santacruz. It appears that Erwin's solution creates geometry, so I thought I'd look at this from a different perspective to see if I could create a particle based visualization of strange attractors in Houdini.

So, it turns out to be a lot simpler than I expected!

The secret sauce is the POP Wrangle node. This node runs a VEX expression against every particle and allows Houdini control over each particle's properties such as size, position, and velocity. The number of solves per-frame is controlled by the POP Solver's subsets attributes.

To give my attractors some variance, my projects use very small spheres as the particle source. Once Houdini had created a DOP Network, I've removed gravity, added the POP Wrangle and an instance geometry node for fine control over particle size: 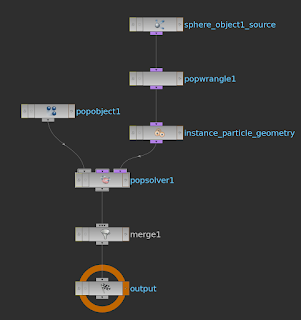 The VEX inside the POP Wrangle nodes isn't a million miles away from my Metal code. The main difference is that for each invocation, it's getting and setting the x, y and z attributes of each particle's position (@P). So, the Hadley attractor POP Wrangle expression is:

The final renders have some depth-of-field and motion-blur added with some nausea inducing camera moves (I'm no cinematographer!). Enjoy!