We’ve written a lot about how you can use NGINX Plus and the open source NGINX software to load balance your websites and apps for optimal availability and reliability. is a fundamental tool for boosting app performance, delivering apps at scale, and deploying containers and microservices.

We’ve previously explained how you can deploy NGINX Plus in the data center (perhaps alongside legacy application delivery controllers), in containers, and in cloud environments, includingAmazon Web Services, the Google Cloud Platform, and Microsoft Azure.

We’ll assume you know the basics of how to configure load balancing, but you can check out these resources if you’d like a refresher:

For simplicity’s sake, we’ll focus on HTTP load balancing, which you configure in the http context. TCP load balancing is configured in the stream context instead. Although the HTTP and TCP load balancers have feature parity, the available directives and parameters differ somewhat because of inherent differences between the protocols; for details, see the documentation about the Upstream modules for HTTP and TCP.

You enable load balancing with two configuration blocks, which we’ll show in their basic form, without optional parameters or any auxiliary features:

Round Robin is the default load-balancing technique for both NGINX Plus and NGINX. The load balancer runs through the list of upstream servers in sequence, assigning the next connection request to each one in turn.

Given the following sample configuration of the backend upstream group, the load balancer sends the first three connection requests to web1, web2, and web3 in order, the fourth to web1, the fifth to web2, and so on.

With the Hash method, for each request the load balancer calculates a hash that is based on the combination of text and NGINX variables you specify, and associates the hash with one of the servers. It sends all requests with that hash to that server, so this method establishes a basic kind of session persistence.

In the following example, the hash directive uses the scheme (http or https) and full URL of the request as the basis for the hash:

IP Hash (available for HTTP only) is a predefined variant of the Hash method, in which the hash is based on the client’s IP address. You set it with the ip_hash directive.

If, however, the majority of the traffic to your site is coming from clients on the same /24 network, IP Hash doesn’t make sense because it maps all of them to the same server. In that case (or if you want to hash on all four octets for another reason), use the Hash method with the $remote_addr variable instead of IP Hash.

With the Least Connections method, the load balancer compares the current number of active connections it has to each server, and sends the request to the server with the fewest connections. You configure it with the least_conn directive.

For the Least Time method (available in NGINX Plus only), the load balancer mathematically combines two metrics for each server – the current number of active connections and a weighted average response time for past requests – and sends the request to the server with the lowest value.

So how do you know which of the load-balancing techniques is best for your website or app?

Traffic patterns vary so much from site to site – and even within a single site at different times of day – that it doesn’t make sense to base the choice of load-balancing technique on a single characteristic (such as bursty traffic vs steady, short-lived connections vs. long-lived, and so on). That said, we’ll consider pros and cons of each method to help you narrow the range of choices to consider.

Whichever subset of load-balancing methods you consider, we encourage you to test them to see which works best for your traffic. “Best” usually means shortest time to deliver responses to clients, but you might have different criteria.

Application performance management tools are very handy for this kind of testing – you can create custom screens with graphs for each of the servers in the upstream group, making it possible to compare them in real time as values change during the test. Several APMs offer custom plug-ins for NGINX Plus and NGINX, including AppDynamics, Datadog, Dynatrace, and New Relic.

Testing is most straightforward if all servers have the same capacity. If not, you need to set server weights so that machines with more capacity receive more requests. See Setting Weights When Servers Aren’t Identical below.

Some metrics to check during testing are:

Pros, Cons, and Use Cases

So now let’s look at benefits and drawbacks of each load-balancing technique, and describe some use cases for which they’re particularly suited. We’ll discuss them in order of increasing suitability for the majority of use cases. As a quick preview: we consider Least Connections (and, for NGINX Plus, Least Time) to be the best choices for the widest range of use cases.

The Hash and IP Hash load-balancing techniques create a fixed association between a given type of client request (captured in the hash value) and a certain server. You might recognize this as session persistence  – all requests with a given hash value always go to the same server.

The biggest drawback of these methods is that they are not guaranteed to distribute requests in equal numbers across servers, let alone balance load evenly. The hashing algorithm evenly divides the set of all possible hash values into “buckets,” one per server in the upstream group, but there’s no way to predict whether the requests that actually occur will have hashes that are evenly distributed. Suppose, for example, that ten clients are accessing a site, and the IP Hash algorithm happens to associate the hash for seven of the IP addresses with web1, one with web2, and two with web3. The web1 server ends up receiving more than twice as many requests as the other servers combined. 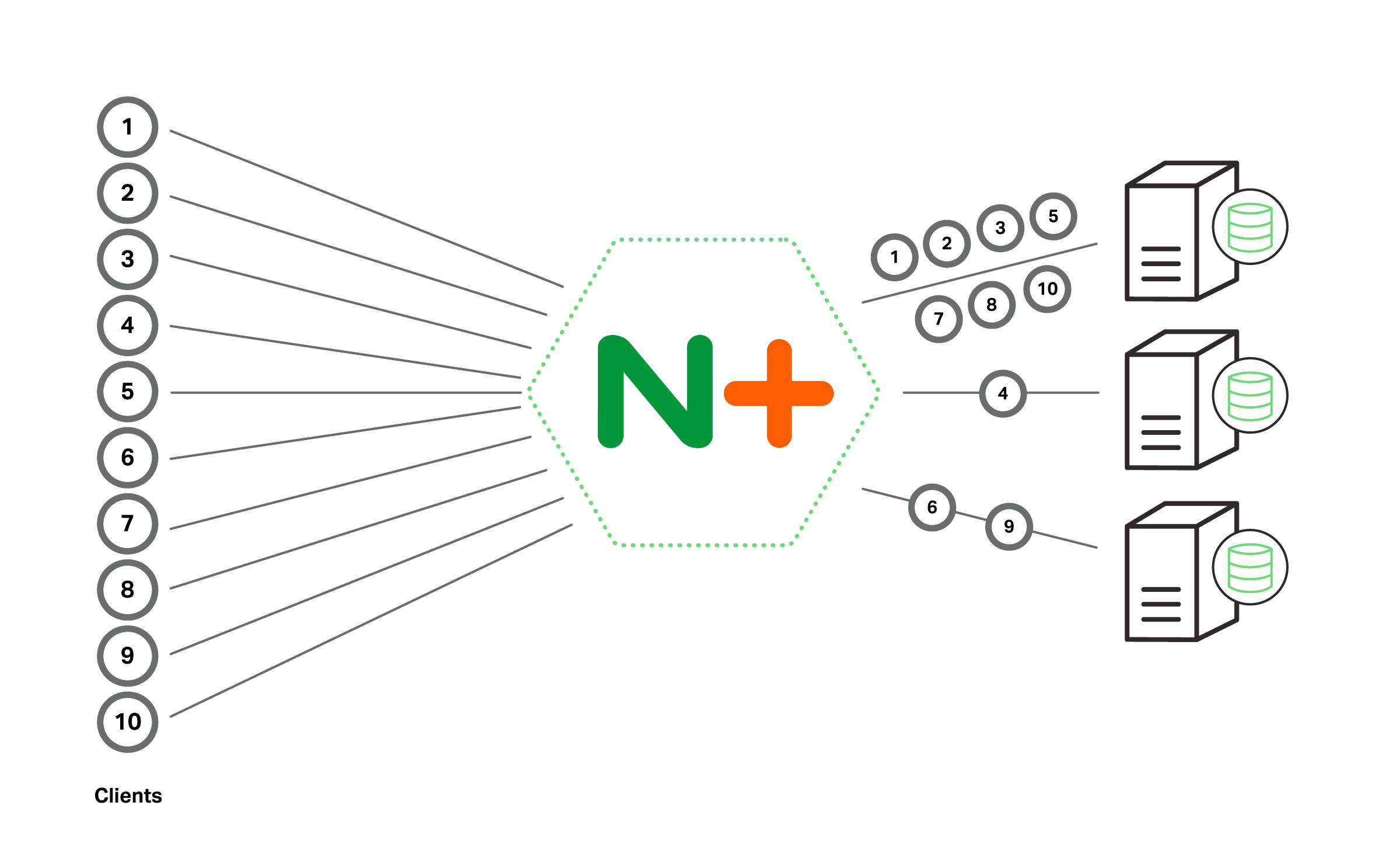 So it makes sense to use Hash or IP Hash when the benefit of maintaining sessions outweighs the possibly bad effects of unbalanced load. They are the only form of session persistence available in NGINX. NGINX Plus provides three other session persistence mechanisms that are more sophisticated and work in combination with actual load balancing (you configure them with the sticky directive). But you might choose Hash or IP Hash even with NGINX Plus, because the three mechanisms don’t work in the following cases:

There are a couple cases where IP Hash – and Hash when the client IP address is in the key – don’t work:

Hashes are deterministic (the hashing algorithm yields the same results every time). This has a couple of positive side effects: all NGINX Plus or NGINX instances in a deployment load balance requests in exactly the same way, and the hash-to-server mapping persists across restarts of the load balancer. (It’s actually recalculated after the restart, but because the result is always the same it effectively persists.)

On the other hand, changing the set of upstream servers usually forces recalculation of at least some of the mappings, breaking session persistence. You can reduce the number of recalculated mappings somewhat:

As noted previously, Round Robin is the default load-balancing method in NGINX Plus and NGINX. That certainly makes it the easiest method to choose – you don’t have to configure anything beyond the upstream group itself.

The general consensus is that Round Robin works best when the characteristics of the servers and requests are unlikely to cause some servers to become overloaded relative to others. Some of the conditions are:

Testing scenarios are particularly good use cases for Round Robin, because this method ensures that requests are distributed across all servers and in equal numbers (or the appropriately weighted proportion). Some other methods don’t always distribute traffic evenly when volume is low, which can skew test results.

The even nature of the distribution can also reveal whether caches are working at full capacity: because there’s no mechanism for sending repeated requests for a popular file to the same server, every server is likely to end up serving and caching a wide range of files (and, in many cases, many of the same files), which makes the cache more likely to fill.
Finally, the even initial distribution helps uncover issues with session persistence in NGINX Plus (as configured with the sticky directive).

As we mentioned above, Least Connections is the most suitable load-balancing technique for the widest range of use cases, and particularly for production traffic. This is supported by anecdotal evidence from our customers. Its performance is stable and predictable.

Least Connections also effectively distributes workload across servers according to their capacity. A more powerful server fulfills requests more quickly, so at any given moment it’s likely to have a smaller number of connections still being processed (or even waiting for processing to start) than a server with less capacity. Least Connections sends each request to the server with the smallest number of current connections, and so is more likely to send requests to powerful servers. (Setting weights still results in even more efficient distribution of requests, however, as described in Setting Weights When Servers Aren’t Identical below).

You can consider Least Time (NGINX Plus only) a more sensitive version of Least Connections. By including the average response time, it takes into account the server’s recent performance history (it’s actually an exponentially weighted moving average, so older response times influence the average less than more recent response times).

Least Time is particularly suitable when the upstream servers have very different average response times. If, for example, you have servers in different data centers for purposes of disaster recovery, Least Time tends to send more requests to the local servers because they respond faster. Another use case is cloud environments, where server performance is often very unpredictable.

We’ve mentioned several times the importance of setting server weights when the servers in the upstream group have different capacities. It’s particularly important for the Round Robin load balancer, which otherwise sends the same number of requests to each server. That’s likely to result in a less powerful server being overloaded while a more powerful one sits partly idle.

To set weights, include the weight parameter on one or more server directives in the upstream block. The default value is 1.

You can think about the effect of setting weights for the different load-balancing techniques in the following way. Keep in mind that the descriptions are conceptually correct, but the implementation in the NGINX Plus code doesn’t necessarily use the indicated mathematical operations. Here’s the upstream group for our examples:

After reviewing the pros and cons of the load-balancing techniques available in NGINX Plus and NGINX, we consider Least Connections (and, for NGINX Plus, Least Time) to be most suitable for the widest range of use cases. But it’s important for you to test several methods in your deployment, because its unique combination of traffic and server characteristics might make another method better for you.

We’d love to hear about your experiences with load balancing in different use cases. Please add them to the comments section below.

This article was written by Tony Mauro

Service Discovery in a Microservices Architecture