i wrote previously about some of the statistics about the devops handbook :

personally, i have a tremendous sense of satisfaction about the 509 endnotes. in some ways, the citations (in the form of endnotes) show the foundations that the book is built upon, both in the principles, practices, metrics and case studies.

because of the nature of this book, unlike almost all of my previous projects, we felt it was important that every statistic and quote was cited — as well as thoroughly fact-checked. we wanted every citation to be easily found.

achieving this last objective required quite a bit of work. many of the citations in the earlier versions of the manuscript pointed to hour-long videos, so a team of people worked to verify that the quote was accurate, often corresponding with the speaker to ensure that the spirit and intent of their quote was preserved.

to make this as easy as possible for readers, i’ve posted all the endnotes to a github repository , as well as bibtex bibliography file that we used for citations for early drafts that were in latex. (the long story of how the manuscript started there in a github repository, moving later to google docs, and then to adobe indesign, and now finally back to asciidoc in github deserves its own blog.)

here are the endnotes posted in their own github repo .

each endnote is provided as follows: a page number (from the paperback), three words from the sentence that the word is anchored to, and then the citation. (the citation style of putting the three words form the sentence is very cool but was new to me. this apparently is called “endnotes keyed to text” — as described here .)

lastly, here’s a word cloud of the citations, with “ibid” replaced by the full citation. ( ibid is from ibidem , meaning “in the same place.”) the book was edited according to the chicago manual of style , which explains that ibid...

“usually refers to a single work cited in the note immediately preceding. … it takes the place of the name(s) of the author(s) or editor(s), the title of the work, and as much of the succeeding material as is identical.” 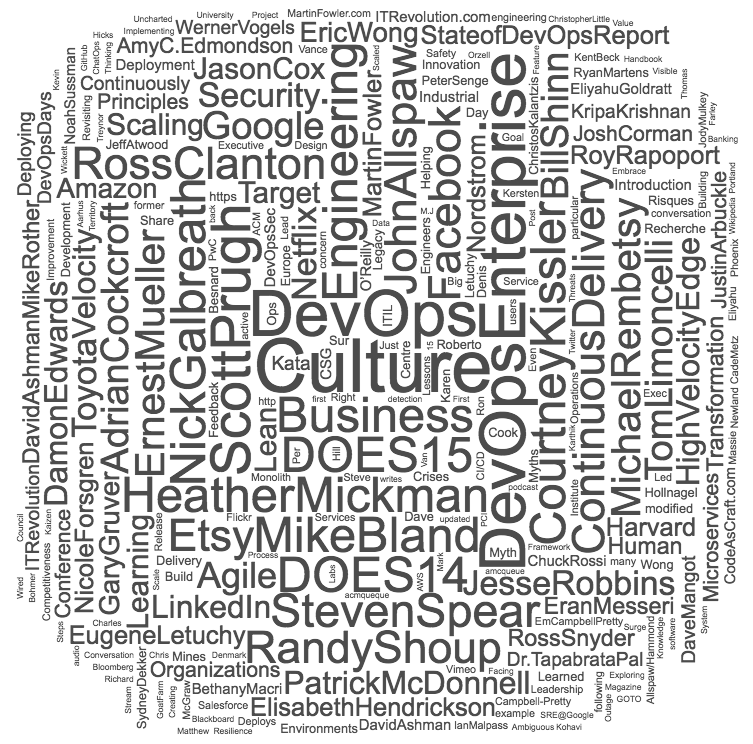 you can clearly see who and what influenced the devops handbook .

i hope this is helpful, and let me know what you think! cheers!