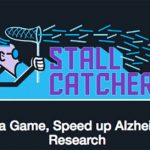 over the past few years, i’ve covered a number of fascinating games whereby the players contribute to scientific research as you play.

eterna is a game that explores the folding patterns of rna, whilst nova is tackling a similar issue, but with the hope that it will get youngsters involved.

charities have also got involved. reverse the odds is a game created by cancer research uk to help with the fight against the disease.

or you have nanocrafter , which has been created by researchers at the university of washington to help further understanding of synthetic biology.

the latest game has recently been developed by a high profile team consisting of researchers from berkeley, princeton, cornell, the human computing institute and more, with the aim of supporting research into alzheimer’s that is being undertaken at cornell.

the game, called stall catchers , allows players to watch movies of blood vessels from the brain of a mouse, and within the videos to look for stalls, which are capillaries that are blocked and therefore not allowing blood to flow through them.

each caught stall scores the player points, which moves them up the leaderboard and earns them various badges.

more importantly, however, the playing also contributes towards the research conducted at the schaffer-nishimura lab at cornell.  they have been working on examining the role of reduced blood flow on alzheimer’s and whether it’s possible to reduce the symptoms of the disease by increasing blood flow in the brain.

the game has been built on stardust@home, which is an existing platform that allowed players to examine aerogel images in a hunt for dust particles.  the hope is that the game will speed up the analysis of blood flow in the research and therefore hopefully expedite new treatments for alzheimer’s.