This is the eight post of our series on classification from scratch. The latest one was on SVM, and today, I want to get back to some very old stuff and also a linear separation of the space, using Fisher’s linear discriminant analysis.

In the case where y takes two values, that will be standard {0,1} here, one can rewrite the later as

is called the decision boundary.

then explicit expressions can be derived

where ry2 is the Manalahobis distance

Let δy be defined as

the decision boundary of this classifier is

which is quadratic in x. This is the quadratic discriminant analysis. This can be visualized as below. 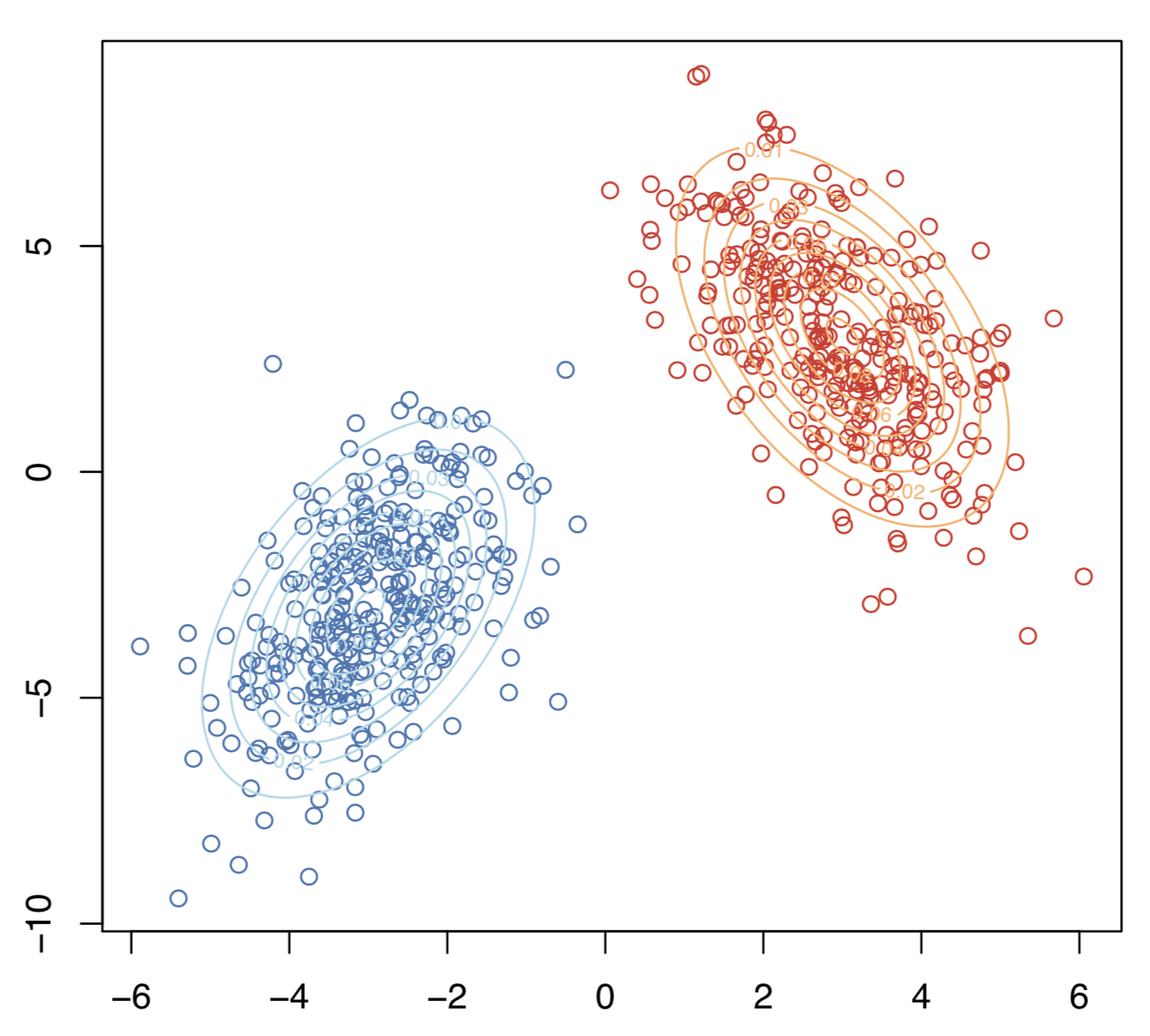 The decision boundary is here: 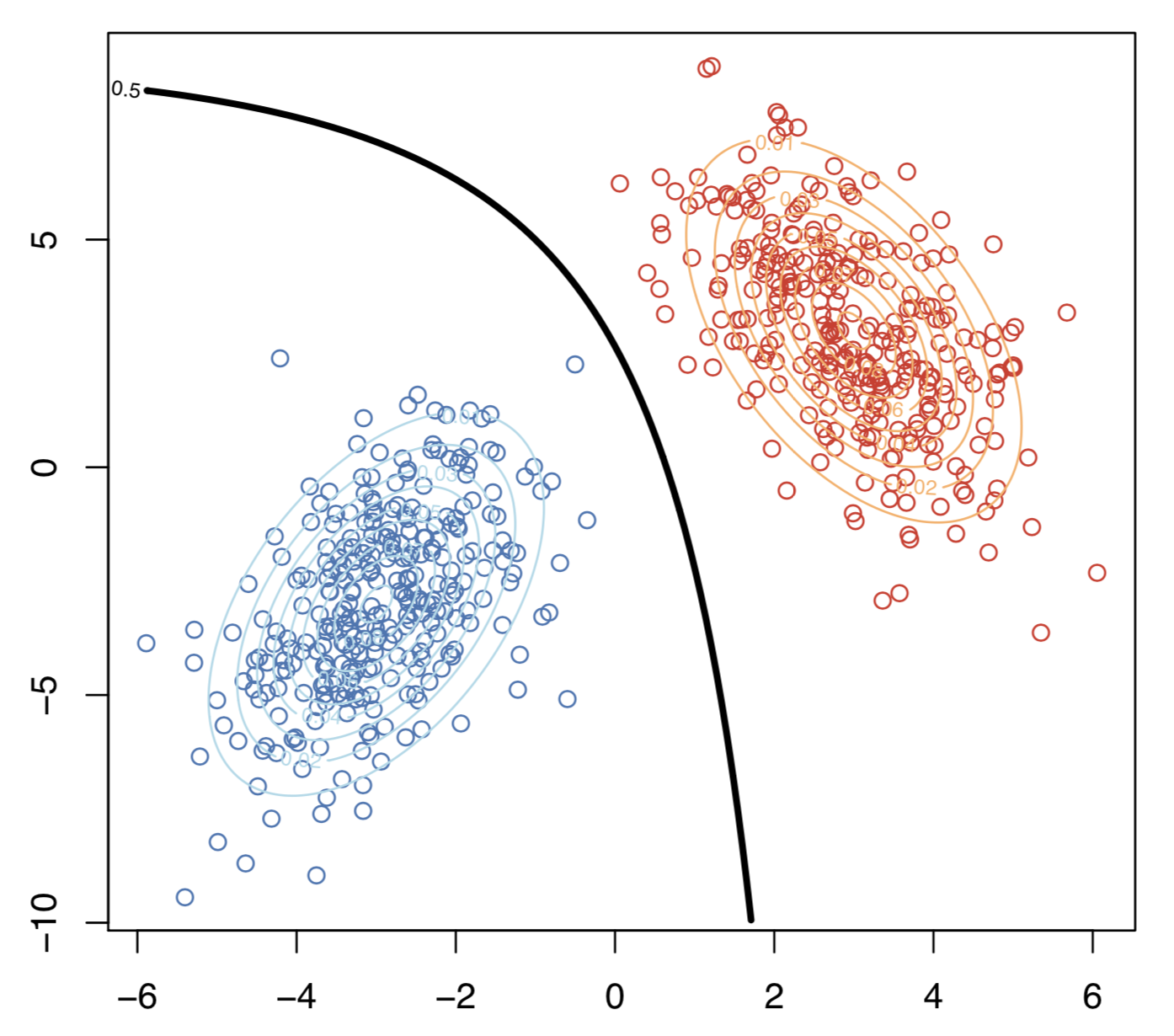 But that can’t be the linear discriminant analysis, right? I mean, the frontier is not linear… Actually, in Fisher’s seminal paper, it was assumed that Σ0=Σ1.

In that case, actually,

and the decision frontier is now linear in x. This is the linear discriminant analysis. This can be visualized as below: 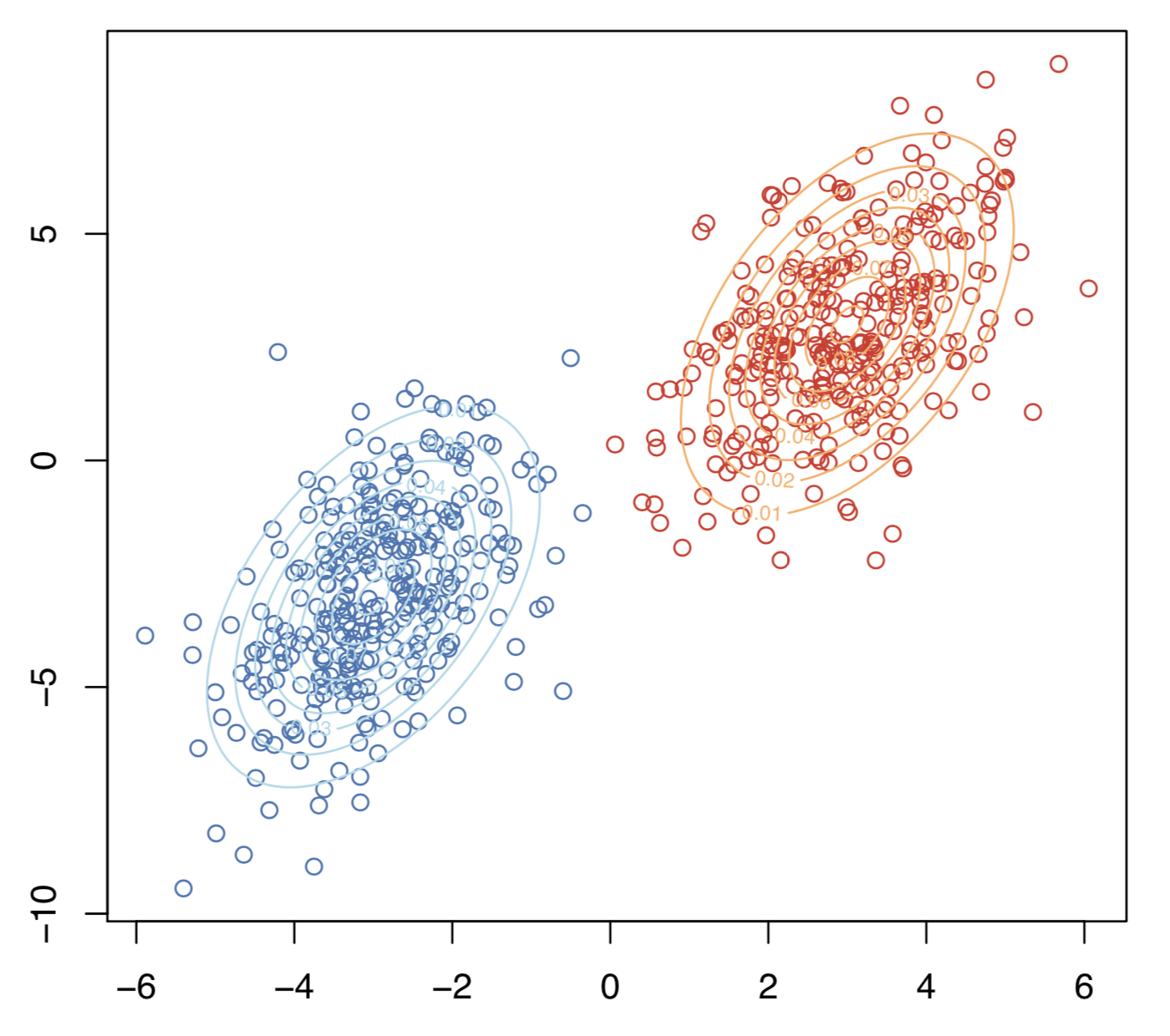 Here the two samples have the same variance matrix and the frontier is: 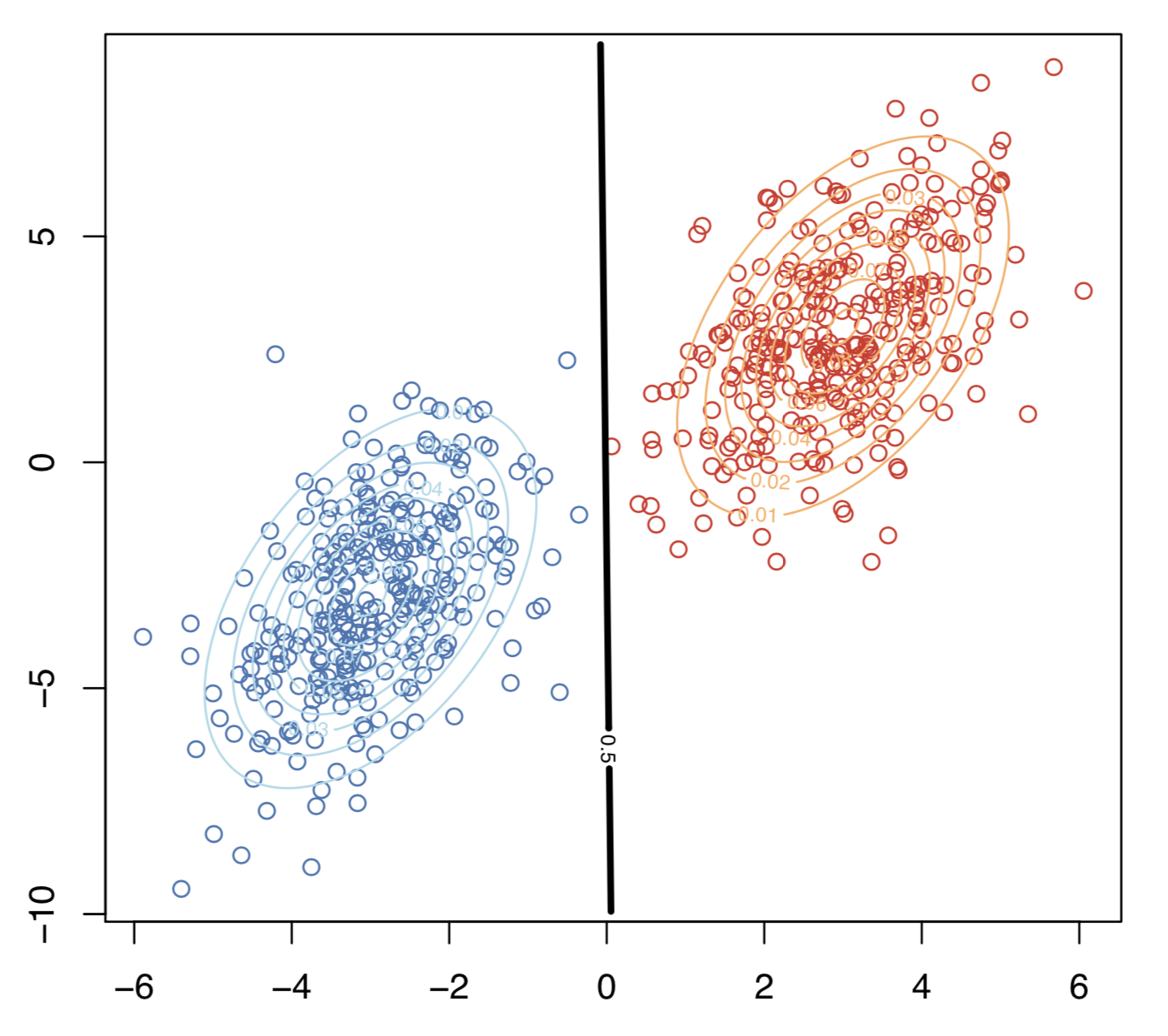 Link With the Logistic Regression

Assume as previously that

which is linear in x

Hence, when each group has Gaussian distributions with an identical variance matrix, then LDA and the logistic regression lead to the same classification rule.

Observe furthermore that the slope is proportional to Σ−1[μ1−μ0], as stated in Fisher’s article. But to obtain such a relationship, he observes that the ratio of between and within variances (in the two groups) was

For the constant – in the equation ω^T x+b=0 – if we have equiprobable probabilities, use

Application (on the Small Dataset)

In order to visualize what’s going on, consider the small dataset, with only two covariates: 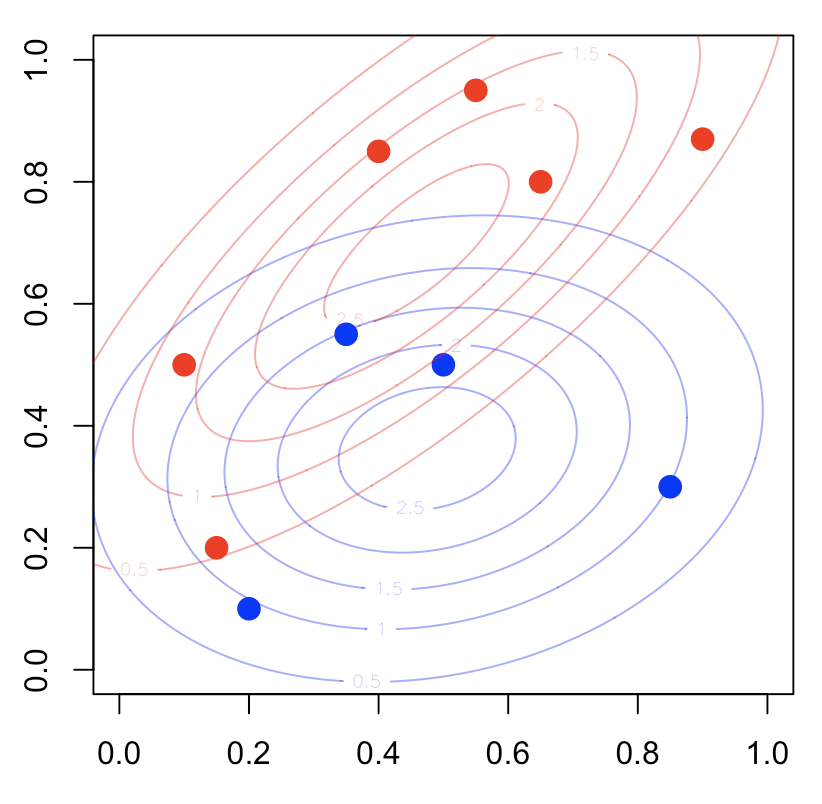 Using R regular functions, we get:

which is the same coefficient as the one we got with our own code. For the constant, use:

If we plot it, we get the red straight line 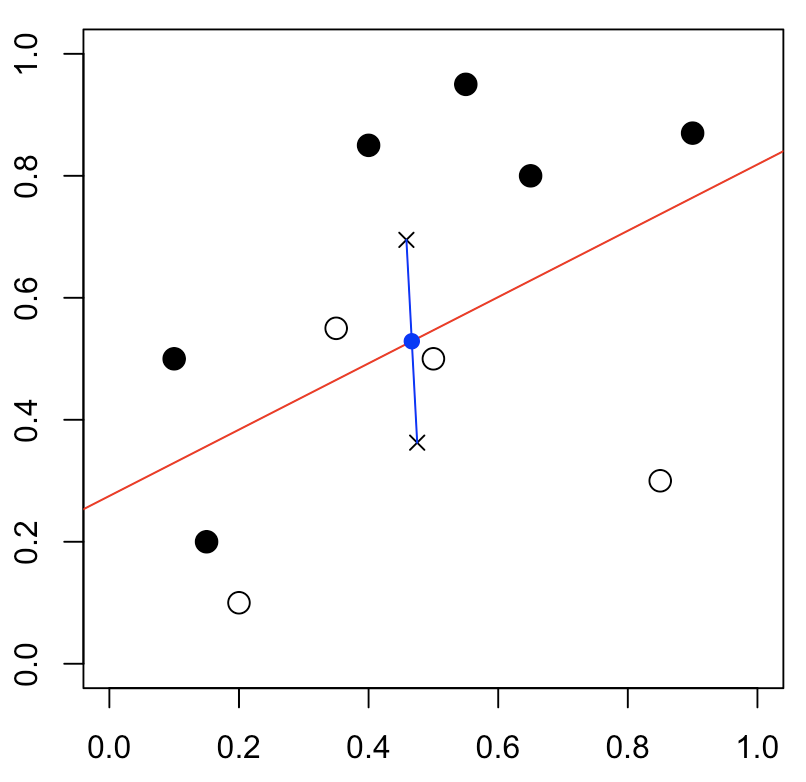 As we can see (with the blue points), our red line intersects the middle of the segment of the two barycenters:

Of course, we can also use an R function: 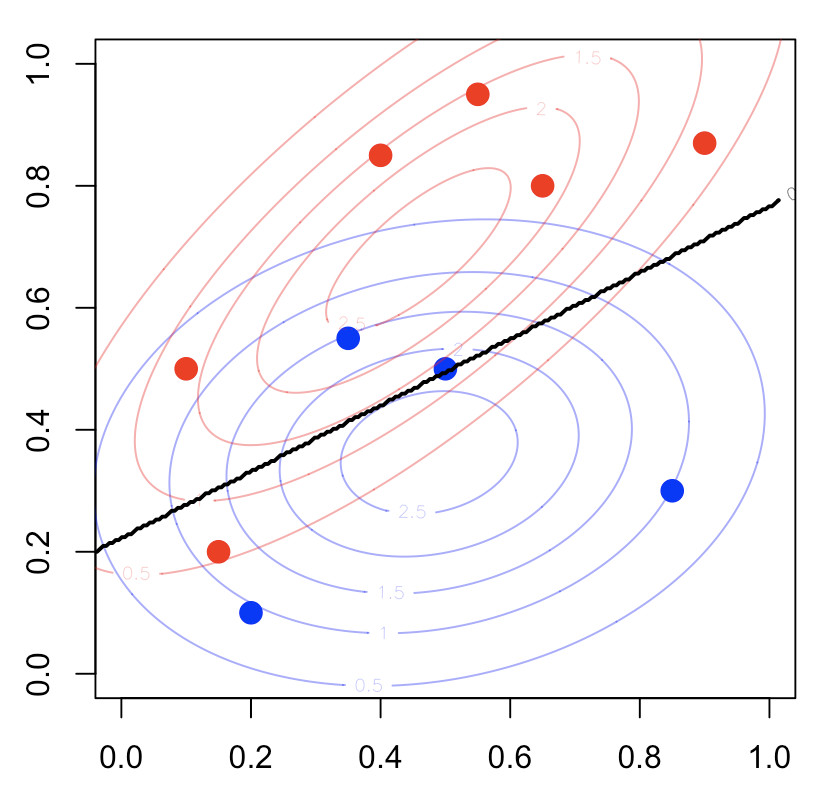 One can also consider the quadratic discriminant analysis since it might be difficult to argue that Σ0=Σ1.

The separation curve is here: 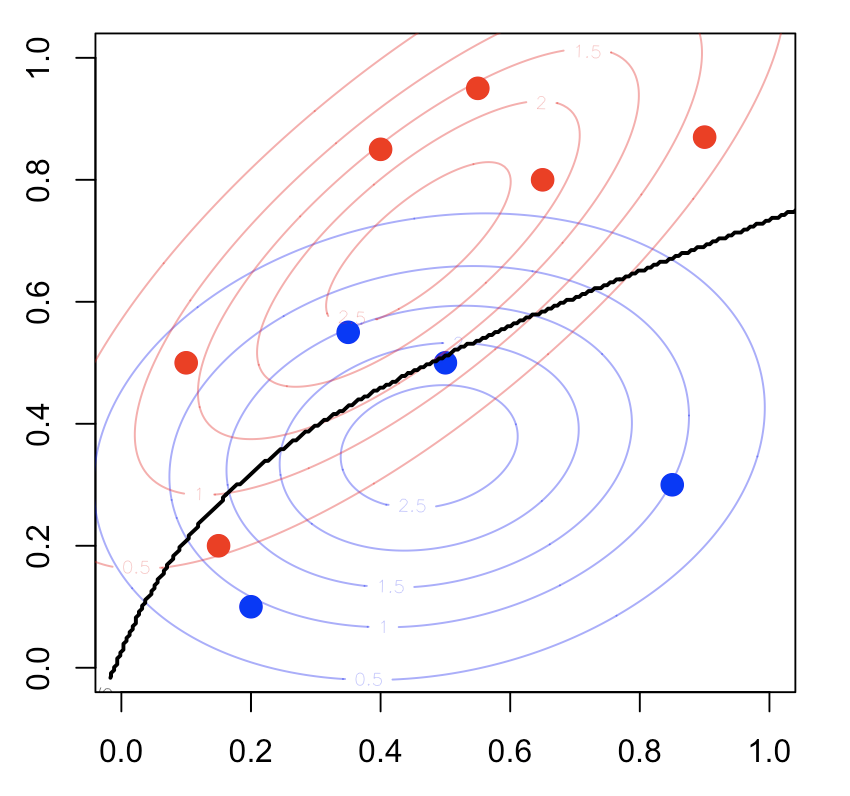