(To learn more about which metrics to monitor for ClickHouse, check out part one of this series. You can learn how to monitor ClickHouse with Sematext in part three.)

ClickHouse itself provides no built-in monitoring solution other than exposing metrics in various database tables that you can query yourself. It does generate metrics that you can collect but offers no feasible way to keep track of ClickHouse alerts or interpret them.

In addition, many of the major commercial monitoring, log analysis, and APM tools available today, such as Datadog and Splunk, lack ClickHouse integrations. This is probably due partly to the fact that ClickHouse, which became open source only in 2016, remains a relatively young DBMS.

Still, you can't responsibly or effectively use ClickHouse without monitoring it. Let's look at metrics available within the ClickHouse installation and an example of how you can monitor the health of your system.

A ClickHouse database includes an extensive collection of system tables that contain important monitoring information. You can find a comprehensive list of these tables here.

One table that is useful when checking the health of your database is system.replicas.The replicas table contains information about replicated tables on the local server. Executing a query such as the one below can alert you to any problems within your system, such as locked tables, extended queue sizes, or inactive replicas.

The above code shows a query to identify problems within your database.

Ideally, this query should return 0 rows if everything is working correctly.

The above code is an ideal response to the previous query.

While useful for one-off ClickHouse monitoring checks, queries such as these aren't practical for long-term monitoring of your database. Let's investigate other options that you can consider.

Graphite and Grafana for ClickHouse Monitoring

The image of above is viewing DBMS performance using the Altinity Graphite integration (source: github.com)

Grafana is primarily a visualization tool that you can pair with Graphite or use independently to view performance metrics from your ClickHouse system.

Here again, however, this approach is not practical for long-term monitoring. While these tools make the monitoring process somewhat more accessible and more visually appealing than executing command line SQL queries as described above, they don't support automated alerting, which is a crucial element of an effective monitoring solution.

Another approach that is worth exploring is Prometheus, an open-source monitoring tool that can ingest ClickHouse metrics and provide the user with visualizing and alerting support. An export server, such as this ClickHouse exporter, written in Go, can be used to query the system tables mentioned earlier in this article and expose the statistics through an HTTP, which can be ingested by your Prometheus instance.

Zabbix is another popular open-source monitoring tool. Like Graphite, it does not directly integrate with ClickHouse, but you can configure Zabbix to monitor ClickHouse manually and use a predefined temple, which is available here.

The following steps are required to install the Zabbix client on your ClickHouse DB server and begin monitoring your Database.

Finally, import the zbx_clickhouse_template.xml temple file into Zabbix to begin to begin monitoring the ClickHouse instance.

The image above is monitoring the rate of data inserted into ClickHouse through Zabbix (source: github.com)

Sematext as a ClickHouse Monitoring Tool

Last, but not least, is Sematext, one of the few monitoring and log management tools explicitly designed by its vendor to support ClickHouse monitoring.

Again, in part three of this blog post series, you'll find details on using Sematext for monitoring ClickHouse. We'll walk through that process in detail. 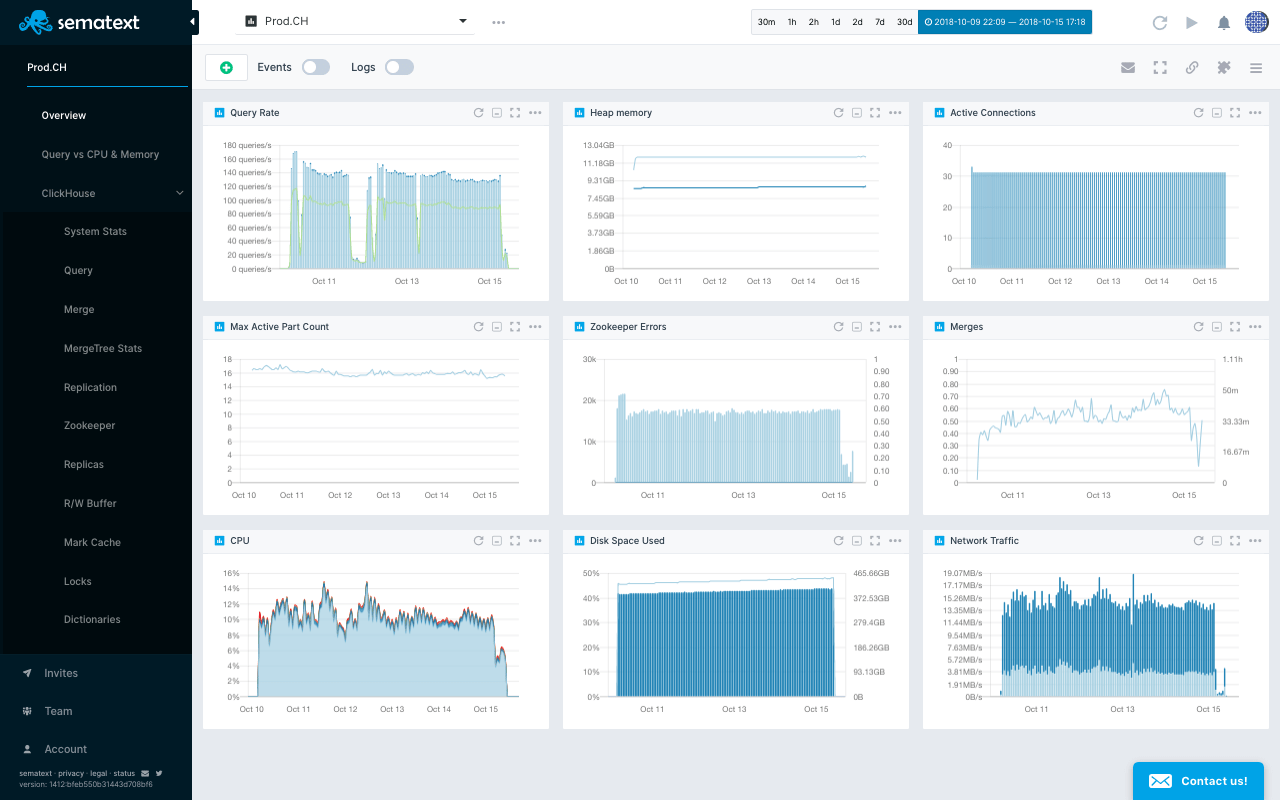 Published at DZone with permission of Chris Tozzi. See the original article here.