As we are nearing the end of 2015, the cloud computing market continues to grow at a rapid speed. From new tools and services to price wars and security debates, the cloud landscape has been stealing the headlines in the tech news sector throughout the year.

Cloud computing has become a major technology trend, especially over the past two years. In fact, it has changed our traditional approach to IT. Today, businesses and individuals have the ability to choose how to deliver or acquire IT services, eliminating the traditional licensing models associated with software and hardware industry. It has re-defined how users access and use technology.

If you look at the cloud space closely, you will find that a lot has been happening. From hackers wreaking havoc in the cloud ecosystem to the Amazon Web Services dominating the space, things have pretty much heated up in the cloud.

In fact, Amazon’s growth was one of the landmarks in this domain last year with 57 percent of IT professionals and information architects using the Amazon Web Services to run their apps. The 2015 State of the Cloud Report from Rightscale also found that the adoption rate of Amazon Web Services was over 4 times greater than Microsoft Azure IaaS and 5 times greater than Rackspace Public Cloud.

But Google and Microsoft weren’t left far behind. The tech giants too got into pricing wars with new technology this year. We saw how Microsoft’s cloud profits had a strong growth in constant currency with its “commercial cloud annualized revenue run rate exceeding $8.2 billion.” Microsoft Azure PaaS and Azure IaaS are among the top five public cloud platforms for enterprises. This is totally in synch with Gartner’s prediction that Microsoft’s cloud profits will exceed its on-premise offerings for the very first time, marking a symbolic and important transition for the company.

In 2015, almost 42 percent of IT decision makers favoured increasing spending on cloud computing; enterprises that have more than 1,000 employees experienced the greatest growth – around 52 percent.

Apart from this continued prominence, we have also seen that the growth of software-as-a-service (SaaS) has been significantly shaping the cloud ecosystem. The growth in cloud deployments and revenues has also been significant this year. With so much going on in the cloud, let’s take a look at some major cloud computing forecasts and estimates for the near future.

According to recent cloud computing forecasts, the global SaaS market is expected to reach $67B in 2018. It is around $49B in 2015, which means the SaaS market will have a CAGR of 8.14 percent. It is also estimated that spending on IaaS (Infrastructure-as-a-Service) across the world will reach $16.5B by the end of this year, indicating a growth of 32.8 percent from 2014.

The figures slightly differ according to a Goldman Sachs study published earlier this year. This study indicates that Global SaaS revenues will reach $106B in 2016, i.e. a 21 percent growth over the projected spending levels of 2015.

Another recent Economist Intelligence Unit study found that most leading enterprises are deploying cloud technology as a strategic platform in order to expand sales channels and boost customer demand. It also indicates that the focus of the lagging cloud adopters was more on cost than on growth. 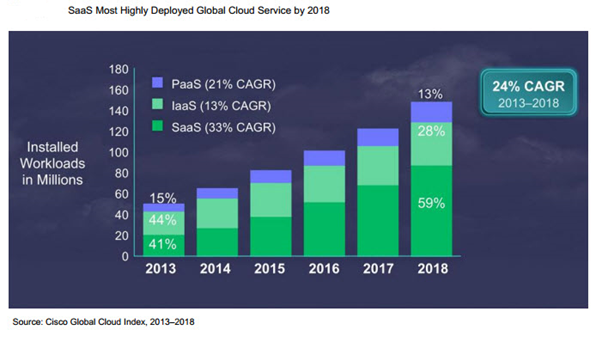 The SaaS revenue is estimated to reach $78.43B by the end of this year and it is expected to reach $132.57B in 2020 with a CAGR of 9.14 percent. All these studies are therefore indicating to one thing – SaaS is going to become the next big thing in the cloud.

With so many things happening in the cloud and such myriad of predictions, data analysis and persistent myths, there is one thing bothering the cloud users – what does the future hold in store for the cloud?

Where is Cloud Computing Going?

Of course cloud computing will continue to soar and a lot of new technology will evolve in the coming days. We are even likely to experience a shift in usage with enterprises moving their day-to-day business services to the cloud. Security too will continue to be a major issue that needs to be sorted out once and for all. But there are some other trends as well that are likely to shape the future of cloud computing.

The following are 3 trends that are powerful enough to change the face of the cloud.

Until now the cloud was “developer-friendly” with application developers being its primary consumers. But it is more likely to become “developer-driven” sooner than we expect. It must support continuous integration and delivery, and its various layers need to be fundamentally API-driven in order to bring developers even closer to cloud technology. Experts also indicate that new API standards will gradually replace REST interfaces to make the integration more dynamic and seamless.

One reason many enterprises still shy away from cloud is because of continued security issues and threats. But things have already started changing. Leading providers have been continuously addressing the security issues to bring in best-in-class security solutions to all users, at the same price. This approach to security will drive a lot of cloud adopting in the coming days, especially among small and mid-sized organizations who can obtain better security at a lower cost. Additionally, many startup tech companies are coming up with add-on security solutions that will further strengthen your security features, making cloud the ultimate answer to all business requirements.

Amazon, Microsoft, Google and other leading cloud providers are already adopting container technologies. We are also seeing the same approach among OS, hardware and application developers. For example, Intel too is supporting containerization with its Cloud Integrity Technology 3.0. It is therefore quite obvious that support for containers will continue to grow in the coming years and we are likely to see more deployment in this ecosystem. An increasing number of micro-service applications will be built on containers. In fact, experts predict that most cloud platforms will either switch to a new container stack or at least start supporting containers by 2017.

Cloud computing will undoubtedly become the most important factor in information technology and services over the next few years. Considering its current growth rate, it won’t be an overstatement to say that cloud is one of the fastest growing innovations globally. In fact, it will become so ubiquitous that we may not use the term cloud anymore to describe or differentiate a service. With such enormous growth potential, it would be interesting to see if anyone could thrive or even survive without investing in the cloud.

What are your thoughts and predictions for cloud computing in 2016? Please share them in the comments.

Published at DZone with permission of Pete Peranzo. See the original article here.