The focus of this article is MLlib, the Spark machine learning library. We will demonstrate three separate clustering algorithms in MLlib, K-Means, Bisecting K-Means and Gaussian Mixture, in an example for exploratory analysis of colorectal cancer survival.

The article is organized as follows. In the next section, we give an overview of cluster analysis. The following section discusses the example where we apply cluster analysis to colorectal cancer research data. In that example, we will cluster patients based on similarities between two features, ‘regional nodes positive’ and ‘stage group’, to analyze if the resulting clusters will imply duration of patient survival. We will show that average survival duration for patients in a cluster decreases as the cluster center has increasing ‘regional nodes positive’ and ‘stage group’. Then, we give concluding remarks. Finally, we provide a code review for each of the algorithms considered in the article.

Clustering is the task of assigning entities into groups based on similarities among those entities. The goal is to construct clusters in such a way that entities in one cluster are more closely related, i.e. similar to each other than entities in other clusters. As opposed to classification problems where the goal is to learn based on examples, clustering involves learning based on observation. For this reason, it is a form of unsupervised learning task.

As an exploratory data analysis tool, clustering has many application areas across various disciplines including social sciences, biology, medicine, business & marketing and computer sciences. Below are some examples.

Below we give a high-level review of the three clustering algorithms considered in this article.

K-means is among the most popular clustering algorithms. Number of clusters, k, is defined in advance. The centers of clusters and the data points in each cluster are adjusted via an iterative algorithm to finally define k clusters. There is an underlying cost minimization objective where the cost function is so-called Within-Cluster Sum of Squares (WCSS). Spark MLlib library provides an implementation for K-means clustering.

The bisecting K-means is a divisive hierarchical clustering algorithm and is a variation of K-means. Similar to K-means, the number of clusters must be predefined. Spark MLlib also provides an implementation for bisecting K-means algorithm.

There are certain types of clustering techniques that do not require number of clusters in advance.  On the other hand, common to all three algorithms, K-means, bisecting K-means and Gaussian mixture discussed above, the number of clusters must be determined in advance and supplied to the algorithm as a parameter. Hence, determining the number of clusters is a separate problem to solve. In this article, we used a heuristic approach based on Elbow Method. Starting from k := 2 clusters, we ran the K-means algorithm for the same data set by increasing k and observing the value of cost function WCSS. At some point, a big drop in cost function was observed but then the improvement became marginal with increasing k. As suggested in this cluster analysis lecture notes, we picked the k after the last big drop of WCSS. (We will explain this with an example later.)

We will apply each of the three clustering algorithms discussed above to SEER (National Cancer Institute Surveillance, Epidemiology, and End Results Program) colorectal cancer statistics. For this purpose, we use the colorectal cancer data file from SEER 1973-2012 (November 2014 Submission) database. The data file has a fixed width ASCII file format where each row corresponds to the record of a unique patient and individual data fields (features) in each record are identified by their column positions. (For further details of the file format see this reference.)

For each patient record, we are interested in 3 data fields, that are all categorical, i.e. taking discrete values belonging to a known set, and are all integer types.

We pre-processed the original data file as follows:

We will apply each algorithm to cluster patient data based on features 1 and 2, i.e. ‘regional nodes positive’ and ‘derived AJCC stage group’ (shortly, ‘stage group’). Then, we will examine if those clusters imply any results in terms of ‘survival months’. We will show that, in general, as ‘regional nodes positive’ and ‘stage group’ of a cluster center increase, the average ‘survival months’ of the patients in the cluster decreases.

In real applications, the number of features in cluster data could be quite large. The clustering example for analyzing tumor DNA microarray data based on gene expressions consists of ~ 7,000 features. The simple example considered in this article uses only two features. This makes it easy to visually interpret the results in 2-dimensional graphs.

Before presenting the results let us discuss how we determined number of clusters. As shown below, we calculated the cost function WCSS as a function of number of clusters for K-means algorithm applied to patient data based on features 1 and 2. Observe that a ‘big drop’ occurs when k = 4. As discussed previously, we chose number of clusters to be 5, which is the one after the last big drop. 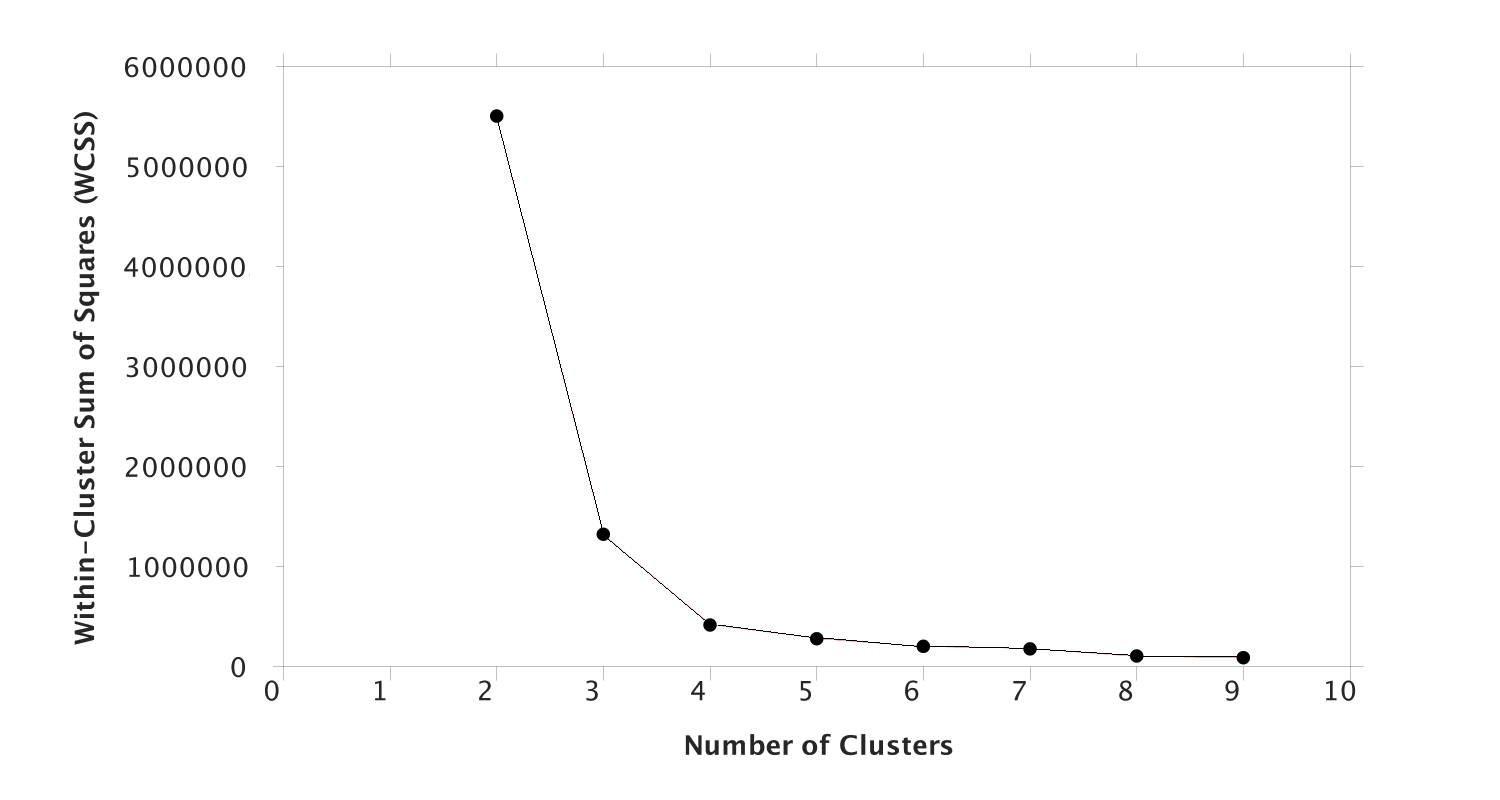 Figure 1. Number of clusters as a function of WCSS.

Note: Data in each graph corresponds to a total of 30,788 patients. Because multiple patients may have the same pair of ‘regional nodes positive’ and ‘stage group’, there are not as many data points. 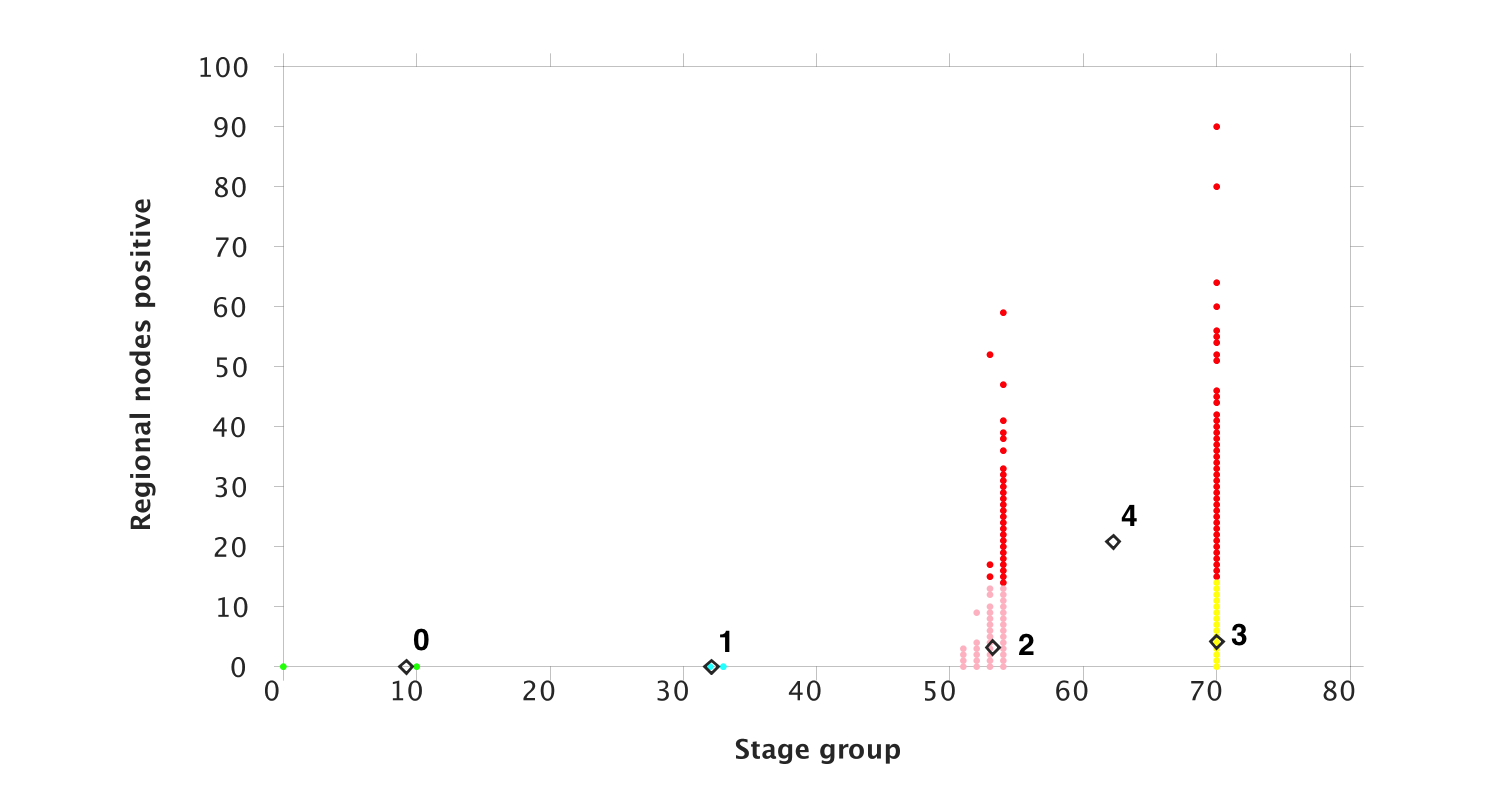 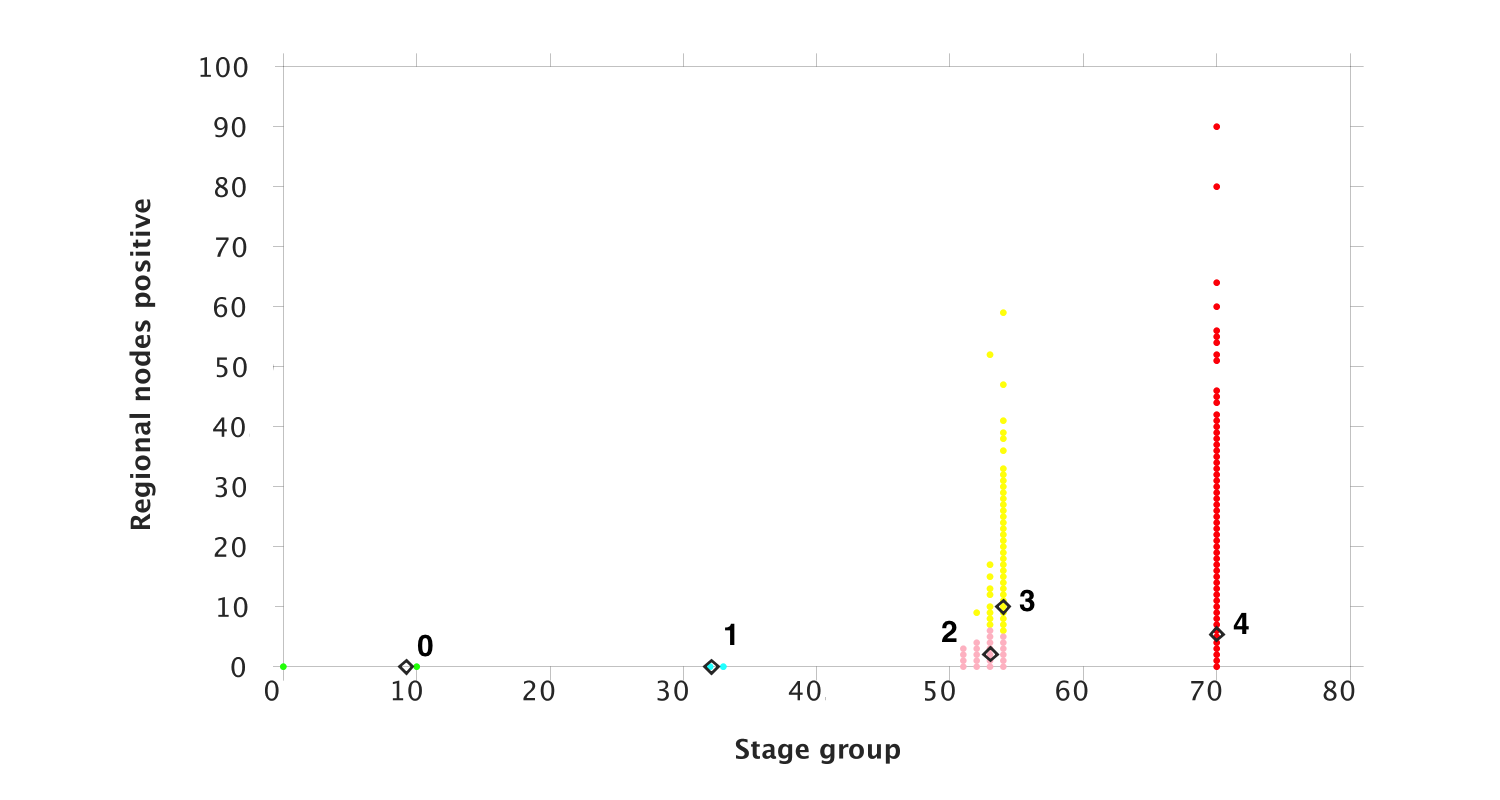 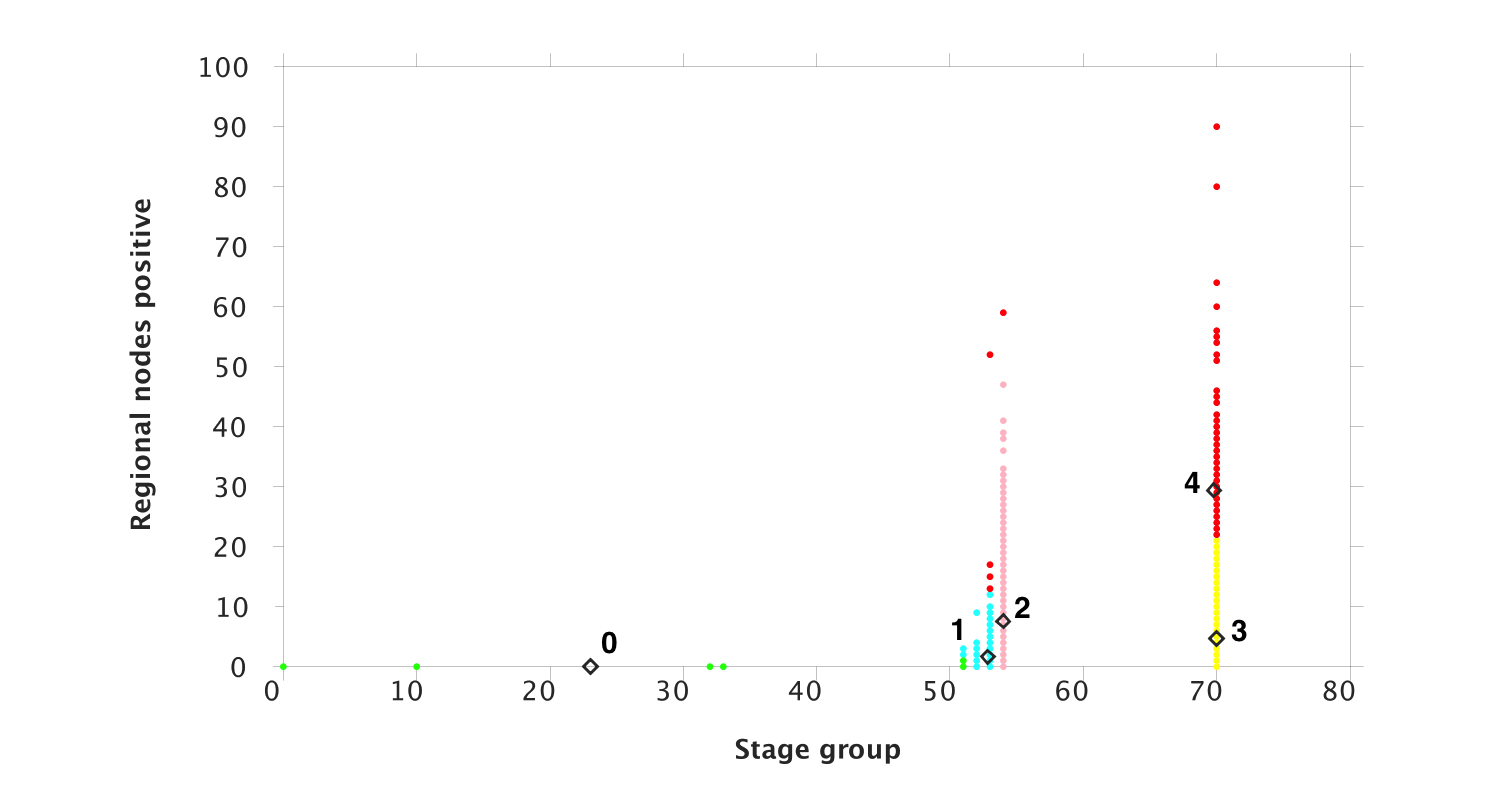 Each algorithm yielded a different set of clusters, however, common to all algorithms is the fact that average survival months for patients in a cluster decreases as the cluster center has increasing ‘regional nodes positive’ and ‘stage group’. (Recall that as the number indicating a cluster center increases, the average survival months for the patients in the cluster decreases.)

This is easy to see for each algorithm particularly for ‘stage group’. Regarding ‘regional nodes positive’, compare clusters 3 & 4 from K-means algorithm to observe that values of ‘regional nodes positive’ in cluster 4 are, in general, greater than those in cluster 3 and hence the average survival months drops. Same observation can be made by comparing clusters 2 & 3 from bisecting K-means algorithm and comparing clusters 3 & 4 from Gaussian mixture. This result is expected as increased stage and increased number of lymph nodes containing metastasis are both indicators of poor cancer prognosis.

In this article, we focused on clustering analysis with Apache Spark machine learning library MLlib and studied an example where K-means, bisecting K-means and Gaussian mixture algorithms are applied to colorectal cancer research data to explore patient data survival. As we will show in the next section, MLlib provides a simple API to apply those algorithms. Some additional comments are as follows.

The following is a class diagram of the code used in this article. Because the Spark MLlib API for K-means, bisecting K-means and Gaussian mixture algorithms are quite similar, we created a parent class named ClusteringColonCancerData to encapsulate all the common functionality. The subclasses KMeansClustering, BisectingKMeansClustering and GaussianMixtureClustering call the Spark MLlib K-means, bisecting K-means and Gaussian mixture APIs, respectively.

We executed our code in a Spark server with a single-node Hadoop installation, version 2.7.1 with Spark API version 1.6.1.

All the code is available from github.

This is an abstract class responsible for the following main tasks.

This class relies on its concrete subclasses to obtain the clusters.

The core functionality is performed by obtainClusters() that starts with initializing Spark configuration and context.

Then, the patient data file is fetched from file system and parsed into a JavaRDD<String> data structure. Next, it is converted to a JavaRDD<Vector> data structure to be used by the algorithms. (We will look into mapFunction() used in conversion in a moment.)

Define number of clusters and iterations. Then, call abstract method dataCenters() to perform the actual clustering task. The response from the method is two data structures, JavaRDD<Integer> clusterIndexes and Vector[] clusterCenters. The size of clusterCenters is equal to the number of clusters and each entry in that array gives the coordinates of the particular cluster center in terms of 'stage group' and 'regional nodes positive'. The size of clusterIndexes is the same as number of patients in patient data file and each entry in that data structure corresponds to a particular patient. Value of each entry is one of 0, …, #clusters - 1 to indicate which cluster the particular patient data belongs to. (Note that clusters are identified by an integer 0, …, #clusters - 1.) For example, if value of an entry in clusterIndexes is 3, then the corresponding patient record belongs to cluster 3.

Because Spark uses parallel processing across nodes, we bring the results to the driver node before processing them to display.

Finally, display the results. Then, stop and close the Spark context. (Review of displayResults() will follow in a moment.)

The conversion of patient data file from JavaRDD<String> to JavaRDD<Vector> is performed via mapFunction() below. The patient data file has data for one specific patient in each row, consisting of three integers separated by whitespace, ‘survival months’, ‘stage group’ and ‘regional nodes positive’. The call() method simply parses each line, places ‘stage group’ and ‘regional nodes positive’ into a double[] and adds to the return Vector.

The utility method displayResults() prints out number of patients, average survival months in each cluster, data points (‘stage group’ and ‘regional nodes positive’) in each cluster together with how many times a data point is repeated, i.e. how many patients correspond to that particular ‘stage group’ and ‘regional nodes positive’. The size of collectedClusterIndexes is the same as number of patients. Each entry in collectedClusterIndexes corresponds to a particular patient.

Now, we can display the average survival months and # data points in each cluster. (We will look into method avg() in a moment.)

For each cluster display distinct pair of 'stage group' and 'regional nodes positive' and how many times they occurred.

Using the helper class PropertyFileGenerator, generate a property file to be used by JCCKit for plotting the clusters and corresponding data points.

This completes the displayResults() method.

The method avg() iterates through its input parameter to obtain a sum and then calculate the average.

The signature for abstract method dataCenters() is as follows.

We will now review how each individual subclass implements that method, to calculate clusters according to the particular algorithm.

This completes the review of KMeansClustering.

This is very similar to KMeansClustering. The main method creates an instance and calls the parent method obtainClusters().

Implementation of abstract method dataCenters() starts with creating an instance of org.apache.spark.mllib.clustering.BisectingKMeans and configuring it with number of clusters and number of iterations.

Then, call the run() method to obtain org.apache.spark.mllib.clustering.BisectingKMeansModel.

This completes the review of BisectingKMeansClustering.

Implementation of abstract method dataCenters() starts with creating an instance of org.apache.spark.mllib.clustering.GaussianMixture and configuring it with number of clusters and number of iterations.

Then, call the run() method to obtain org.apache.spark.mllib.clustering.GaussianMixtureModel.

Having obtained the model, display cluster centers similarly to the other two algorithms.

This completes the review of GaussianMixtureClustering. (Please note that Gaussian mixture API does not readily provide a method to calculate WCSS.)