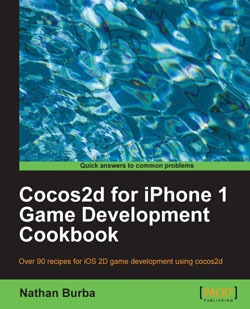 we absolutely guarantee that just about anyone will find the book worth way more than its price in time saved. to see for yourself, head over to the book’s website

now that’s how you go about supporting a book!

also check out the book’s thread on the cocos2d-iphone forums for some subtle understated commentary like:


gee, gushing much? but it actually does deserve all that and more. let us take the very first recipe, “drawing sprites”. oh for crying out loud, you think, how does that merit a recipe? is this thing going to be full of fluff i already know? well, no actually, that simple sounding recipe goes over drawing from files, images, textures, and frames; explains mipmapping and batch nodes; and tops it off with colorizing rectangles. well, that is pretty good for a first recipe, isn’t it now.

third chapter covers data management; reading and saving plist/json/xml … and even sqlite and core data. probably not much completely new to you here either, but the details of working with sprites and the like are handy.

fourth chapter is on physics and is a particularly valuable one for those of us weak on the background there; focusing on box2d, takes you from basic setup through impulses and forces to joints, bullets, ropes, and ending up with a 2.5d isometric game engine! that’s a pretty standout one there.

sixth chapter, “audio” is another notably useful one, nice explanations of sound manipulating, positioning, metering, recording, ipod library usage, and finishing up with creating a midi synthesizer with mobilesynth and then speech recognition/synthesis.

seventh chapter, “ai and logic” is well-nigh invaluable for those without a background in it; basic waypoints, targeting, line of sight, flocking, pathfinding (the “in a box2d world” getting special mention, good luck figuring that one out without some help!) and finishing off with discussion of lua integration.

we figured the last chapter “tips, tools, and ports” was a bit weaker; the tools picked here mostly aren’t up to the currently regarded best of breed mentioned in yesterday’s roundup, and the cocos2d-x and cocos3d intros were too short to really be of much use. but hey, still worth a read.

closest thing we have to a real complaint is that you have to email the author to get the extra chapter which was omitted from the print versions; really, how hard would it be to put it as an addenda in the electronic versions most of us are going to be buying anyways? but hey, if mild inconvenience is the worst whine we can come up with, that’s pretty solid.

so, yeah. we pretty much can’t imagine anyone developing with cocos2d who won’t find something in here well worth the price; for those just starting out it might be a bit over your head, but it would make a perfect second step after one of the introductory books or our starting recommendation the iphone game kit . so buy it now!