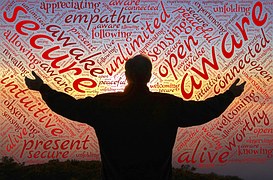 The most basic level of code awareness is just making the code work. Does this line of code compile, run and do what I intended it to do? While learning to code this lowest level of awareness consumes almost all our capacity: it is difficult to focus on anything else other than just typing in the correct syntax.

Once we’ve mastered typing in code that works there is another level of awareness: is the intent of this line of code clear? Will another human being be able to understand this? Hell, will I be able to understand it in a month’s time? This is where code readability begins. While writing code we expend some of our mental capacity on making sure that the code will be readable.

Code legibility though is about more than just each single line of code in isolation. We also need to consider whether this line makes sense in the context of the rest of this method, maybe we should extract a new method? Does this line of code make sense in the context of the rest of this class? Does the behavior belong somewhere else? Does the design that I’m discovering actually make sense? Is it consistent? Is the pattern I’m implementing consistent with the rest of the application? Besides making each line of code compile there are numerous higher levels – rising through each of the larger structures in the application: the method, the class, the module, the component, the system.

Besides code legibility there are other factors to be aware of: will failures in this code be easy to understand, will exceptions help me get to the right part of the code quickly, what happens if things I depend on fail? Will this code perform well, in what scenarios and with what frequency will it be called? Is this code secure, are there ways for an attacker to take advantage of this code?

Writing good code requires developers to be aware of these levels all the time. However, if we’re tired, hungover, or fed up we probably won’t give much time to these concerns. We’ll just make the code work that’s in front of us and ignore the bigger picture. When we’re lacking mental capacity, we tend to stop worrying about the higher levels and focus on the lower level, easier problems. “I’ll come back later and fix the design”, we tell ourselves.

This is where pairing can help. I don’t think it’s true that the pairing partner is only thinking about the bigger picture, but the non-driving partner certainly has spare capacity to think about these things and act as a conscience against the driver missing something or getting tired.

For example a while back I interviewed a candidate who used “yield return”. This is an unusual thing to see, so I asked why use it? “To start a discussion about whether or not you should ever use it”. This I found quite impressive: a candidate with enough mental capacity to not only solve the problem at hand, in a good way; but still with enough spare capacity left to realise that there was an opportunity to use an unusual construct purely to provoke a discussion of it – effectively driving the interview through code, to show off the depth of their knowledge and experience. This is the kind of person you want on your team: someone with enough spare mental capacity to make sure the code is clean and the design correct.

I think this lack of capacity is why the code we write when we’re tired or when we’re learning a new language or learning a new framework is bad: all our capacity is focused on just making the code work, we don’t have spare capacity to also think about whether the code is readable or whether the design makes sense. When we’re struggling to just make the code do what we want, to just keep the compiler happy, is it any wonder the outcome is a mess?