The social web is far from a new concept. Even before social networks such as Facebook and Twitter made social popular to the mainstream, the knowledge management community have been utilising discussion forums and wikis within organisations for many years. 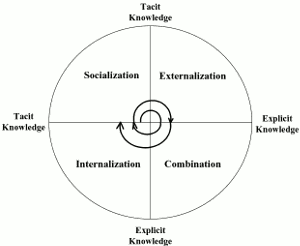 Indeed, Nonaka and Takeuchi famously visualised the knowledge transfer process way back in 1995, with their theory that knowledge moves from tacit to explicit and back again as it flows throughout the enterprise.

Whilst the virtues of knowledge management are well known, research from Carnegie Mellon reveals a hidden benefit to working in a collaborative manner, that will eventually lead to increased productivity.

They found that when our mental processes are regularly honed by other users, the quality of our work takes a significant leap forward. A prime example of this is the regular feedback provided via the discussion threads powered by Comindware.

Using Comindware Tracker, team members are able to discuss all the details in one single system, collaborate on tasks effectively, and thus, stay always productive.

“Collectively, people spend more than 70 billion hours a year trying to make sense of information they have gathered online,” says Aniket Kittur, assistant professor in Carnegie Mellon’s Human-Computer Interaction Institute. “Yet in most cases, when someone finishes a project, that work is essentially lost, benefitting no one else and perhaps even being forgotten by that person. If we could somehow share those efforts, however, all of us might learn faster.”

Think of the last time your company or team conducted a major project. The chances are you will have conducted a post-mortem to uncover what went well, what didn’t, and of course what lessons can be taken forward into future projects. Increasingly teams are conducting pre-mortems to try and identify problems before they even exist.

The research suggests however that such processes occur much less often in knowledge work, and that this represents a major problem. They suggest that the benefit of knowledge maps is not so much from the content itself but in how the map was organised. This is a fundamental benefit of Comindware Tracker’s Knowledge Base element, helping to increase productivity and manage all the best practices that have been implemented within any type of the company.

For instance, in a multinational business it’s quite likely that each region or territory will have unique requirements, but nevertheless those regions can benefit from shared insight on procedural issues.

The researchers showed that when multiple users update and modify knowledge maps, new users spend less time looking at specific content, and more time on structural elements such as labels.

“This suggests that distributed sensemaking facilitates the process of ‘schema induction,’ or forming a mental model of the information being considered,” Counts says.

The key point however is that this shift didn’t occur until the map had been updated at least once by another user. So just as organisations are now concentrating as much on the how of business as the what, this research suggests that if we are to get the most from our knowledge workers we need to get them collaborating on how they think rather than just on what they’re thinking about.