As you would have seen, there are two different ways to contributing to the Workbench: Actions and Commands. Although Commands are newer and advanced, I've always preferred using Actions, simply because of my comfort level in using them. Now that I've started fixing some bugs in the Command framework, I'm forced to look into the details. The more deeper I look into the Commands, the more I'm loving it. So I decided to write a series of on the Commands and this is the first one in the series. Many of the information presented here is obtained by looking some old bugs, wiki and digging into CVS history. If I'm missing anything or wrong about something let me know.

Lets start with Actions. We are able to contribute to the menus, toolbars, pull down menu, etc. We are able to specify the UI details like label or tooltip in the plugin.xml itself, which helps in lazy loading. So whats wrong with them?

Lets see how the Commands Framework eliminates all this. Commands are defined by the org.eclipse.ui.commands extension point. A typical command would look like:

Yeah thats it. That defines a Command! If you want to place this in a tool bar, you have to use the extension point org.eclipse.ui.menus:

Now that takes of the placement in the UI. But what about the code that gets executed? That goes into a another extension point, org.eclipse.ui.handlers:

One last piece is to add an icon to the Command
No price for guessing that you need to use another extension point, org.eclipse.ui.commandImages:

All set. Lets see the Command in action: 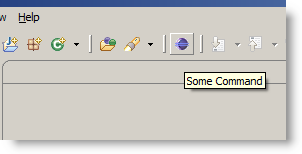 As you see, in the actions we would just use only one extension point, instead of the four which we have used now. Does it sounds like a round about way or doing things? Probably once we get to know about multiple handlers for a Command and context based association & enablement of the handlers etc, we will see the beauty of the framework. That would be the next in this series.