This is the part 3 of our “How to convince your CEO to invest in IoT” blog series. Previously in part 1, we demonstrated some organizational and institutionally biasis against IoT. Then, in part 2, we explained the fundamental components of IoT and the benefits of implementation. Lastly, in this part 3, we will conclude with some common concerns (with answers) worth presenting to leadership.

Common Concerns and How to Respond

Senior leaders have vast experience and time-tested decision-making skills, which have trained them to anticipate risk. There's no need to test their abilities, but instead, it's better to support their decision-making skills with an innovative possibility. Here are some of the most common concerns about IoT and how to respond.

How To Make Sure Your Company’s IoT Projects Are Secure?

Eclipse sponsored a survey in 2016 to better understand how developers are building IoT solutions. This survey found that nearly 50% of respondents chose security as the main concern. So, what is data security anyway?

Data privacy consists is the ability for an organization to manage information and determine which information is sensitive and should be restricted. Data encryption is a common way for businesses and individuals ensure privacy and consists of transforming data to disguise it from unauthorized individuals.

Data integrity represents the accuracy and consistency in making data available, reliable, and useful. For instance, data integrity is achieved when an IoT platform provider ensures constant data readings with optimal connectivity and hardware for a given environment.

All the while, data availability refers to the capacity of keeping a system operating. In IoT, for instance, availability is understood to be the capacity to access a backup data source when unexpected downtime occurs.

Companies can make sure to keep IoT data private, honest, and available by using recommended best practices and adhering to standards within each of the IoT components: devices, connectivity, and your IoT platform.

Here are some common practices recommended to any IoT developer looking to better understand security.

This way, if communication is compromised, the token can be revoked on the server side and the devices would just request a new token in the next request. No need to change the firmware of thousands of remote devices.

Is IoT Financially Attainable For Your Company?

One of the barriers to adopting new technologies are upfront costs. However, according to Goldman Sachs, numerous triggers are turning the IoT from a futuristic buzzword into a reality. The cost of sensors, processing power, and bandwidth to connect devices has dropped low enough to spur widespread deployment:

So even if your IoT solution appears to have a higher cost than the value it can generate in the long term, you should still do the project; chances are that the prices will drop and you will become the first player in your industry to have the solution that your competitors saw as financially impossible.

Different thought leaders have shown special dedication and interest around the Internet of Things.

Goldman Sachs Global Investment Research proposed these five verticals for IoT adoption. The earliest adopters (which we are already seeing) are wearables, cars, and homes, with cities and industrial applications following closely behind.

Goldman Sachs released a report called “The Internet of Things: Making sense of the next mega-trend,” suggesting IoT will be the third wave of Internet, which may be the biggest. The first two waves were, of course, fixed Internet during the 1990s and mobile Internet throughout the 2000s.

Tech companies such as Google, IBM, Amazon, Samsung, and Intel have developed their own Internet of Things platforms to leverage new applications.

Nations are paying attention to the Internet of Things, too. The French government is deploying a Lora network to ensure Internet connectivity throughout France. Meanwhile, Germany coined the term Industrie 4.0 in an effort to move industry to the fourth Industrial Revolution.

How Does The IoT Fit Into Your Industry?

Mckinsey released the Mapping The Value Beyond The Hype study in order to know the economic value of IoT across industries. The findings of McKinsey suggest that IoT has the power to impact directly or indirectly every single industry. Where do you fit in IoT? 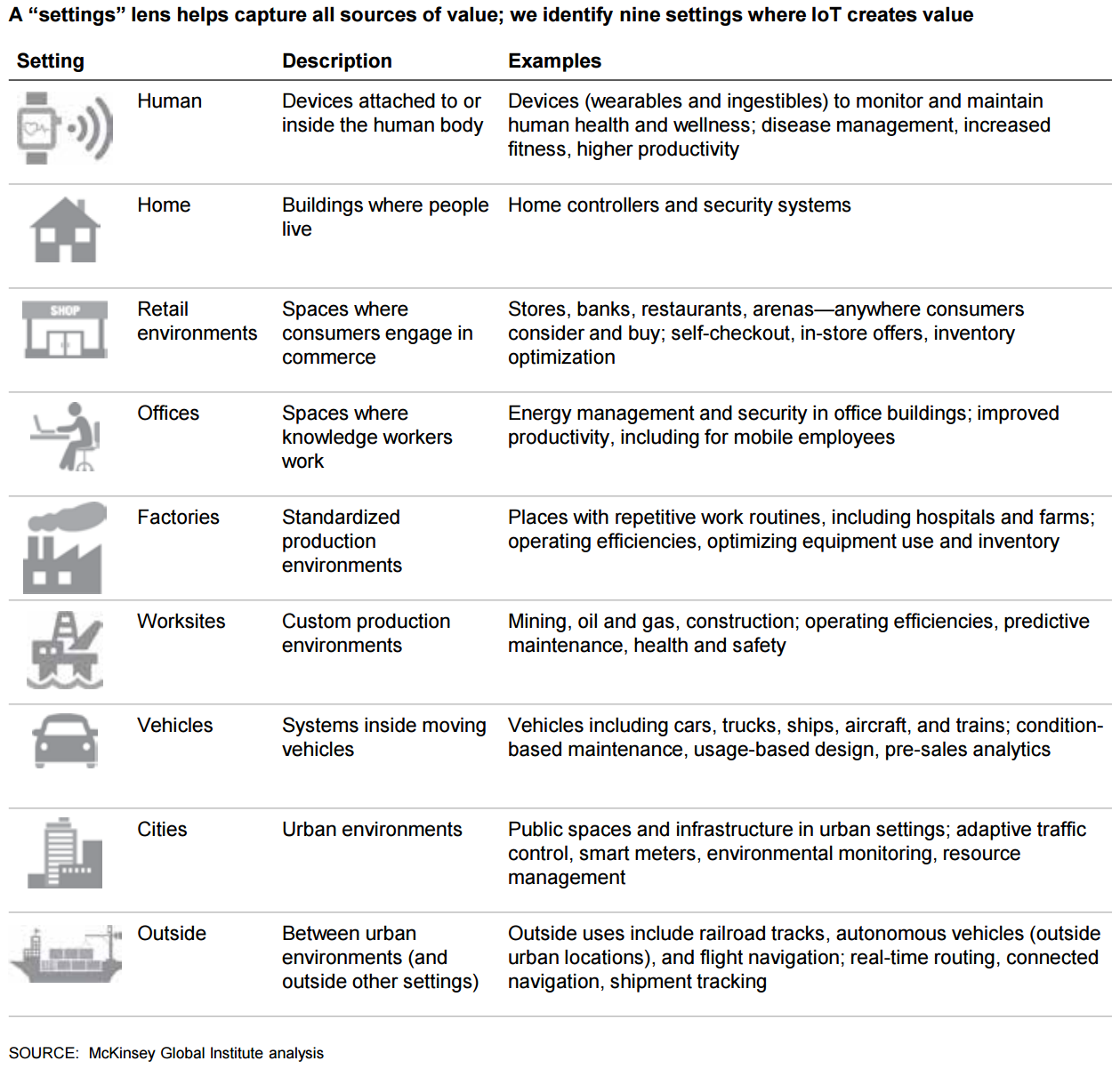