In this post, I want to summarize a common pattern that I have used in my previous text mining projects.

Text mining is different in that it uses vocabulary term as a key elements in feature engineering, otherwise it is quite similar to a statistical data mining project.  Following are the key steps ...


The overall process of text mining can be described in the following flow ... 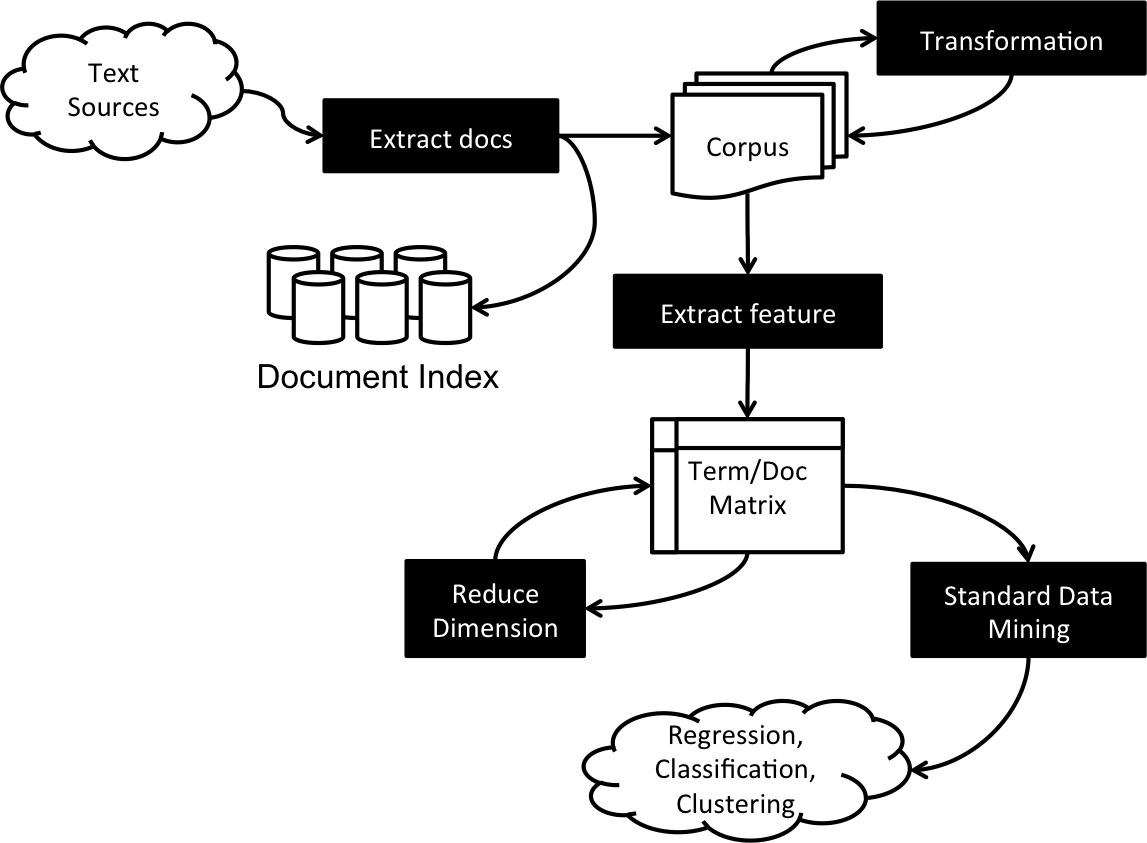 In this phase, we are extracting text document from various types of external sources into a text index (for subsequent search) as well as a text corpus (for text mining).

After the document is stored in the Corpus, here are some typical transformations ...

For text mining, the "bag-of-words model" is commonly used as the feature set.  In this model, each document is represented as a word vector (a high dimensional vector with magnitude represents the importance of that word in the document).  Hence all documents within the corpus is represented as a giant document/term matrix.  The "term" can be generalized as uni-gram, bi-gram, tri-gram or n-gram, while the cell value in the matrix represents the frequency of the term appears in the document.  We can also use TF/IDF as the cell value to dampen the importance of those terms if it appears in many documents.  If we just want to represent whether the term appears in the document, we can binarize the cell value into 0 or 1.

After this phase, the Corpus will turn into a large and sparse document term matrix.

Since each row in the document/term matrix represents each document as a high dimension vector (with each dimension represents the occurrence of each term), there are two reasons we want to reduce its dimension ...
SVD (Singular Value Decomposition) is a common matrix factorization technique to convert a "term" vector into a "concept" vector.  SVD can be used to factor a large sparse matrix of M by N into the multiplication of three smaller dense matrix M*K, K*K, K*N.  Latent Semantic Indexing (LSI) is applying the SVD in the document term matrix.

Another popular technique call topic modeling, based on LDA (Latent Dirichlet Allocation) is also commonly used to transform the document into a smaller set of topic dimensions.

At this point, each document is represented as a topic vector.  We can also add more domain specific features (such as for spam detection, whether the document contains certain word or character patterns such as '$', '!').  After that we can feed the each vector into the regular machine learning process.

I have used Python's NLTK as well as R's TM, topicmodel library for performing the text mining work that I described above.  Both of these library provide a good set of features for mining text documents.
Text mining Machine learning Data mining code style workflow