Components are the basic building blocks of Angular applications. In a simpler manner, we can say components are UI/ View elements along with the mechanism to show and operate on data.

The Angular Team defines a component as the Patch of the screen that we call a View which declares the reusable building blocks for an application. So, a component is anything which is visible on the screen, which can be reused again and again.

As we are using the Angular CLI, we can create the component in one command. If you don’t know how to set up the project using CLI, please visit this link:

When you are done with the project setup, you are ready to add our new component by using the following command:

All right, in my case, I will run the command ng generate component myfirstcomponent (This is the name of my component, you can choose your own). This will generate the following folder structure in your application: 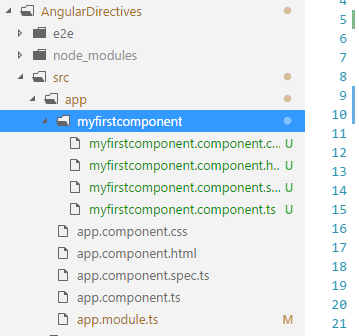 One more change that we can see is in the AppModule.ts file.

When we look at our first component it adds the snippet like below.

Its main section is an export of the component from the Angular core which is needed to mark the class as a component.

Next thing which needs to see are:

How to Use This Component

Ok, we know how to add and some basic stuff with components, so now let’s see how to use them in the View. To use this component, we must keep in mind the selector property of the component, which, in our case, is app-component. To use this, just add this line in the app.component.html file: <app-myfirstcomponent></app-myfirstcomponent>. So the code snippet for app.component.html will be like what I've got below:

We have seen that the selector will load the HTML in the which the second property of the component decorator (templateUrl) is specified. When we see the template URL, it is like I've got below:

So, to sum up, we can say the selector is the name of the component which will be used by Angular to call the components inside the HTML file.

Ok, we have seen how to we create and consume the same component in an application. Now, let’s see how we can share data between the components.

There are basically four ways to pass data between components; let's look at them one-by-one.

The following points are the ways we can pass the data between parent and child components.

There will be always a need to send data between the parent component and the child component. Let’s see step by step how we can achieve this.

This decorator is used to obtain data from the component. To achieve this, I have made changes to the component. Let’s add two components, namely a master and a child component, in the application by using Angular CLI's ng generate command.

When the components are added look at the code snippet for the child component (child.component.ts)

To do so, we must add the child component to the master component, but how do we do that?  We have selectors for our use here. Let's look at the following HTML (Master.component.html) snippets:

When we run the application, we can see the following output:

Now, to pass the value from the parent component to the child component we have to make the following changes.

Update the Master component (Master.component.ts) to the following snippet:

And in the child template selector, which is present in the master.component.html file, make the following changes:

What we are doing here is we are assigning the value of the property  sendgreetingtochild to the bindingmessage input of the child component.

When we save the file, we get the following output:

We can see the changed output which is the same as where we have assigned the value of the variable in the master.component.ts.

To sum up, we can say that in order to pass the value from parent to child the following steps must be taken:

In this, the child component emits the data to the parent component by using the @output decorator and event emitter. This change can occur on a button click or any data change in between.

To achieve this, we can perform the following steps:

In order to see how we can use the  @output decorator and event emitters, lets modify the child component with the following snippet.

Before understanding the code, lets look at some basic things we have in this snippet, specifically @output and EventEmitter .

The attribute which is used when we want to send the data outside of the component.

This attribute is always combined with the event emitter which can be accessed outside of the component by using the event that is passed.

Event emitters are used in Angular to emit events in the components.

When we see the description of the above code we can see that we have used the @Output attribute and we have set it to the new EventEmitter, and we also have the method EmitValue which emits the value of the message property to the master component.

Next, let's look at how the master component handles these values:

What we have done in this code is we have created the function receivemessage which receives the value from the event emitter.

To see the output, we have to make some changes with the child and parent templates.

This is the child template (HTML file) which has one input and we can see that the EmitValue() from the child component will be called whenever a button click happens. Another change that we need to make is to change the master component like below:

When we look at the code, we can see that we have added the child component inside the master component in order to receive the output. What we have done is we have assigned the  receivemessage($event) to  messagefromchild.

This was all about the passing of the data from the parent to the child and child to parent. We will other techniques, like @viewchild using services, in the next article.

How to Dynamically Create a Component in Angular