a coworker shared a linkedin function a while back that creates a graphical map of your contacts.  i created my own and marveled at the pretty colors and curving lines.  other than looking like a new and highly personal art form, what did it mean? 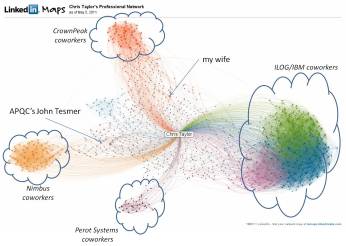 truth be told, i’m still not entirely sure.  yet i keep looking at it as though it hangs at tate modern or the getty.  maybe what fascinates me is the idea that i can have a visual on the entirety of my professional life’s relationships.  my investment portfolio.  as i grow older, i’m progressively more aware that these contacts are the result of a significant investment of time and energy between people that has become its own form of currency.  the ability to help someone find a job, gain a reference, and ask an important question of someone you know well has a very high value. if i had to start over, could i? it would take decades.

there’s an argument for doing the same (and for the roi) at the enterprise level made in an article “ social enterprise moves closer to reality ” published a while back.

there’s also recent arguments for the dark side of social networks as an illusion of humor, kindness, intellect, etc.

the opposite is also true

if this is a form of currency, then not making and maintaining those relationships is to be poor in network.  as the world gains an ability to connect with each passing moment, to be network poor can go further and become a liability (a debt and the opposite of having currency).  i’m not claiming this wealth can be measured on facebook or linkedin, but it has to be found somewhere, even if in the aging rolodex.  i am saying is that it is becoming gradually more important and definitely more measurable.  and now visual.

what happens when we become truly post-industrial and we move from employers to job aggregators, companies that hire contractors to perform most of the work? a network becomes the gatekeeper for employment.

technology is making it possible and valuable to create and maintain an enormous level of relationship wealth.  are you taking advantage of it?