While delving into service mesh, key-value store, or a service discovery solution in cloud-native space, you would have definitely come across Consul. Consul, developed by HashiCorp is a multi-purpose solution which primarily provides the following features:

In such deployment patterns, Consul (Server and Agent both) resides in a Kubernetes cluster. Although, Consul provides many features, we will see what will the better approach while dealing with Consul Key-Value store. Briefly speaking Consul Key-Value (KV) provides a simple way to store namespaced or hierarchical configurations/properties in any form including string, JSON, YAML, and HCL.

A complementary feature for KV is watches. As the name suggests, it watches (monitors) the values of the keys stored in KV. Watches notify changes occurred in one or more keys. In addition to this, we can also watch services, nodes, events, etc. Whenever a notification is received for a configuration change, a 'handler' is called for action to the respective notification. A handler could be an executable (can be used to invoke the desired action on reception of notification) or an HTTP endpoint (can be used for health checks). Depending upon this, we can differentiate Consul Deployment patterns within a Kubernetes cluster as follows:

Let us consider an example in which we deploy the Consul server using a standard helm chart. Consul agent is deployed as separate deployment with one or more replicas and let us say there is an application that needs to watch a specific configuration in the KV. 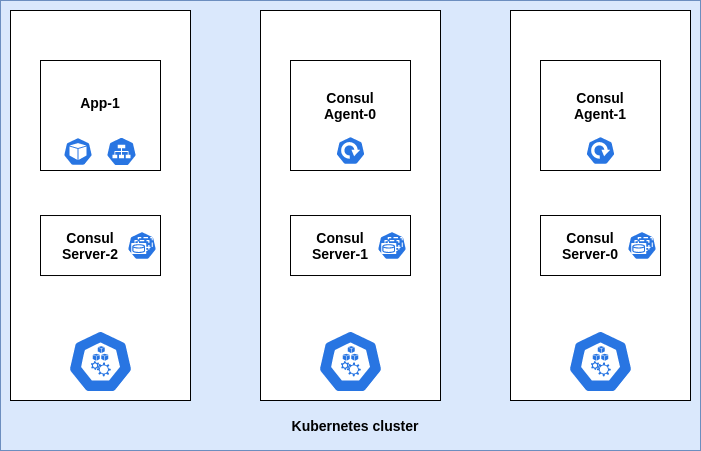 With proper configuration of Consul watch and handler, application successfully gets notified on KV changes. Generally, watches are configured using CLI command consul watch or using JSON file placed in config directory of Consul agent. A typical watch configuration is as shown below:

From the above snippet you can see that, multiple watches are configurable at a time. Moreover, you can monitor same KV and and have separate actions by providing different scripts. Script handler can also execute any binary.

Now suppose, there is a rise in traffic and the application needs to scale accordingly. In this scenario, the newly scaled Pods may not get the KV change notification. This is due to the fact that the application is being exposed to the Consul agent via the Kubernetes service. Kubernetes service by default load balances between the Pods on round-robin (considering user-space modes) or random (considering iptables mode) basis and thereby, relaying the incoming traffic to any one of the runnning pods of the application. Thus, all the running Pods may not receive a notification at once. Moreover, if you want to take a specific action on receiving Consul notification, you need to configure a handler script that will reside in the application Pod. This script in the Pod won't be accessible to the Consul agent, as it doesn't have access to file-system inside the Pod. 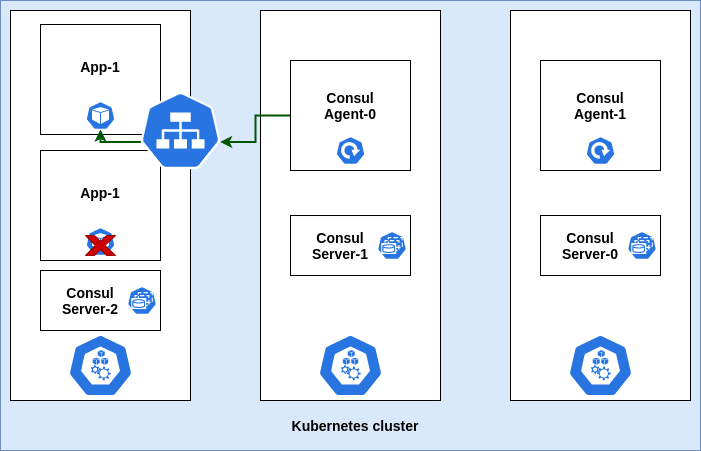 To summarize, this Consul deployment pattern is useful for low volume use cases where we just need to monitor KV changes and don't need to take any action on its detection. The deployment of Consul agents is easy to scale whenever required.

In this scenario, we will use the Consul Helm chart to deploy the Consul agent as a DaemonSet. These changes can be incorporated by client.enabled: true and adding Consul watch configuration in client.extraConfig in values.yaml of Helm chart. Although this approach is homogenous to the previous deployment pattern, it alleviates the efforts required to manage the deployment all by yourself. 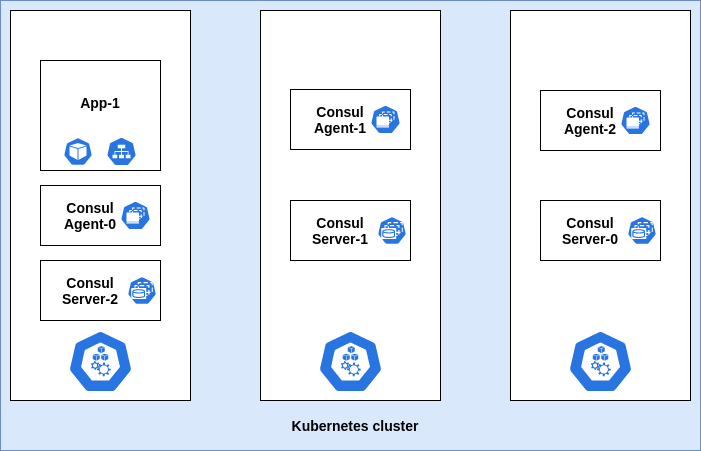 In this pattern, the Consul agent runs as a sidecar in each Pod. Watch is configured on this Pod to track changes of the KV and subsequently notify using the executable handler. In this case, the handler is pointed to the localhost in contrast to the DaemonSet approach, where the handler is pointed to a service endpoint or an IP address. Whenever the Pod terminates or goes down, a new Pod gets created with the same configuration and joins the Consul cluster to track the same KV changes again. 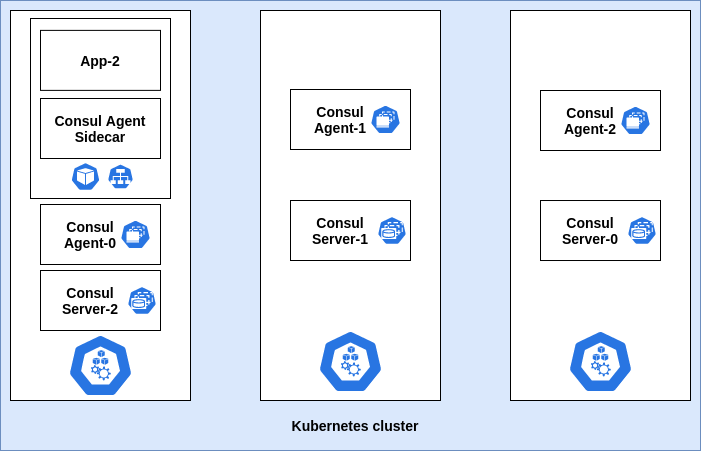 This pattern suits the scenarios where some services of an application lie in virtual machines (VMs) and remaining services are containerized and managed by Kubernetes. This scenario is observed while migrating from legacy to cloud-native workloads. Here, services running in VMs are discovered and accessed by services running in Kubernetes and vice-versa. Service discovery in a hybrid pattern is typically carried out by a feature called Cloud Auto-join. This requires appropriate cloud configuration and the rest is taken care of by Consul. This feature supports all major cloud providers including AWS, GCP, Azure, etc. To enable the sync between Kubernetes services and services running on VMs, we need to provide syncCatalog.enabled: true in Helm chart values whereas service discovery flow can be decided by syncCatalog.toConsul: true and syncCatalog.toK8s: true. In addition to this, services are also synced based on namespaces, prefix and tags.

Connect is a service mesh feature provided by Consul. In this pattern, Consul adds a sidecar in each application Pod. Sidecar acts as a proxy for all the inbound and outbound communication for the application containers inside each Pod. Sidecar proxy establishes mutual TLS between them. As a result, entire communication within the service mesh is highly secured. Moreover, the Connect sidecar acts as a data plane while the Consul cluster acts as a Control plane. This provides fine control to allow/deny traffic between the registered services.

connect-inject adds the Consul Connect sidecar in the application Pod.

connect-service-upstreams specifies the upstreams services to be connected to the current application service. Port specifies is the static port opened to listen for the respective communication.

This blog is originally published on InfraCloud Blogs.

Published at DZone with permission of Ruturaj Kadikar . See the original article here.