In this tutorial, we’ll show how to use ApiLogicServer to create, customize and run a Database based API. API Logic Server is an open-source Docker container. With the commands shown below, you get:

Create the sample project in a minute or two, as follows. With Docker started, enter these Terminal commands (Windows, use Powershell):

If you've got Docker installed, you can easily execute this tutorial as you read (no need to install Python, and running this demo won't affect existing Python projects). This is not required — ample screenshots are provided to illustrate the process and the actual code.

The commands above created a project. We'll review how to customize and debug it below. But let's first see what is now working.

Your API is instantly ready to support UI and integration development, available in swagger, as shown below. JSON:APIs are interesting because they are client configurable to reduce network traffic and minimize organizational dependencies. Explore the API with Swagger on localhost:5000: 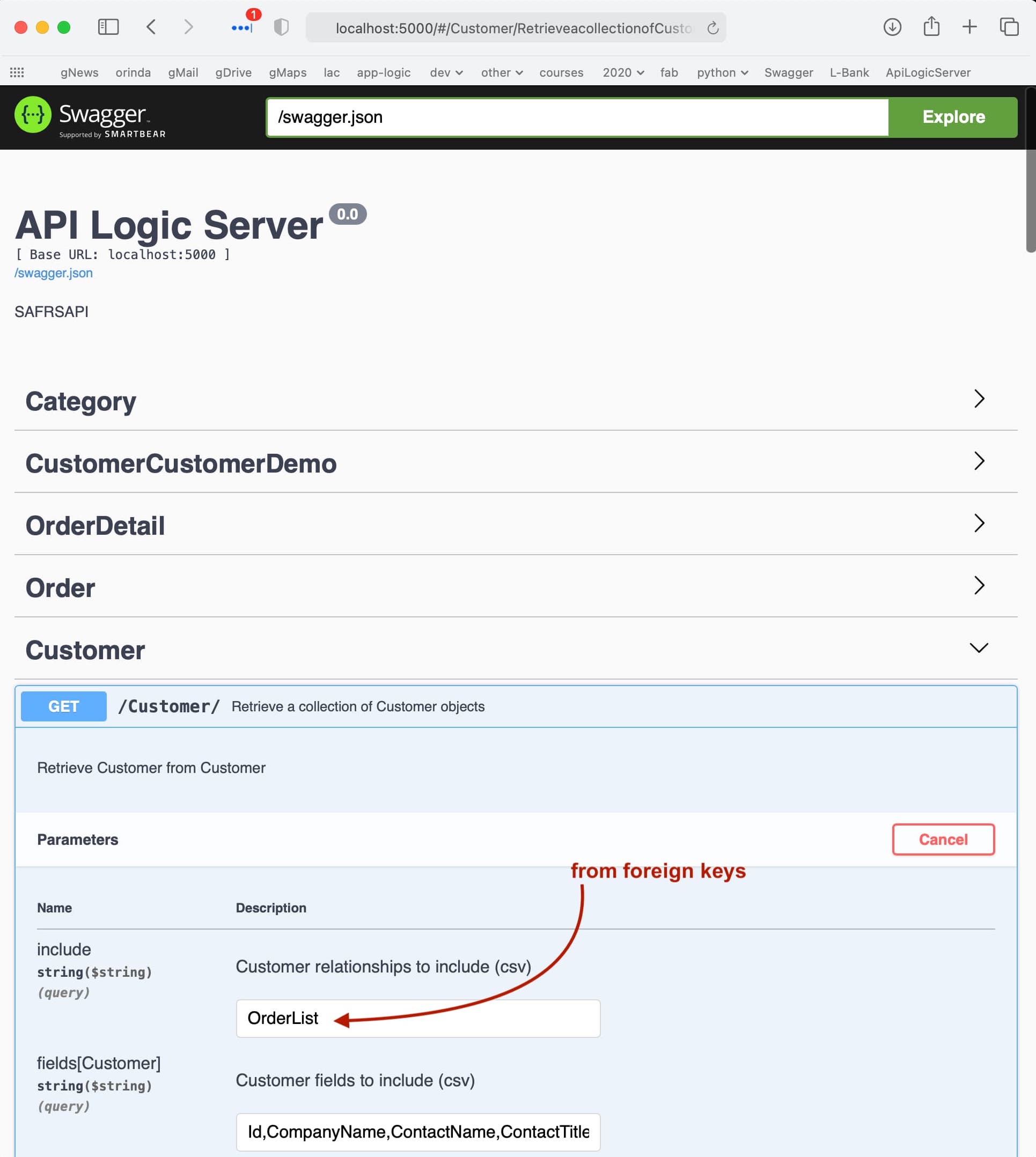 ApiLogicServer provides unique spreadsheet-like rules that reduce transaction logic by 40X. Logic is declared in Python (example below), and is:

The following 5 rules (lines 50-68) represent the same logic as 200 lines of Python, and directly map to the "cocktail napkin spec" (at the bottom), so business users can read and understand them: 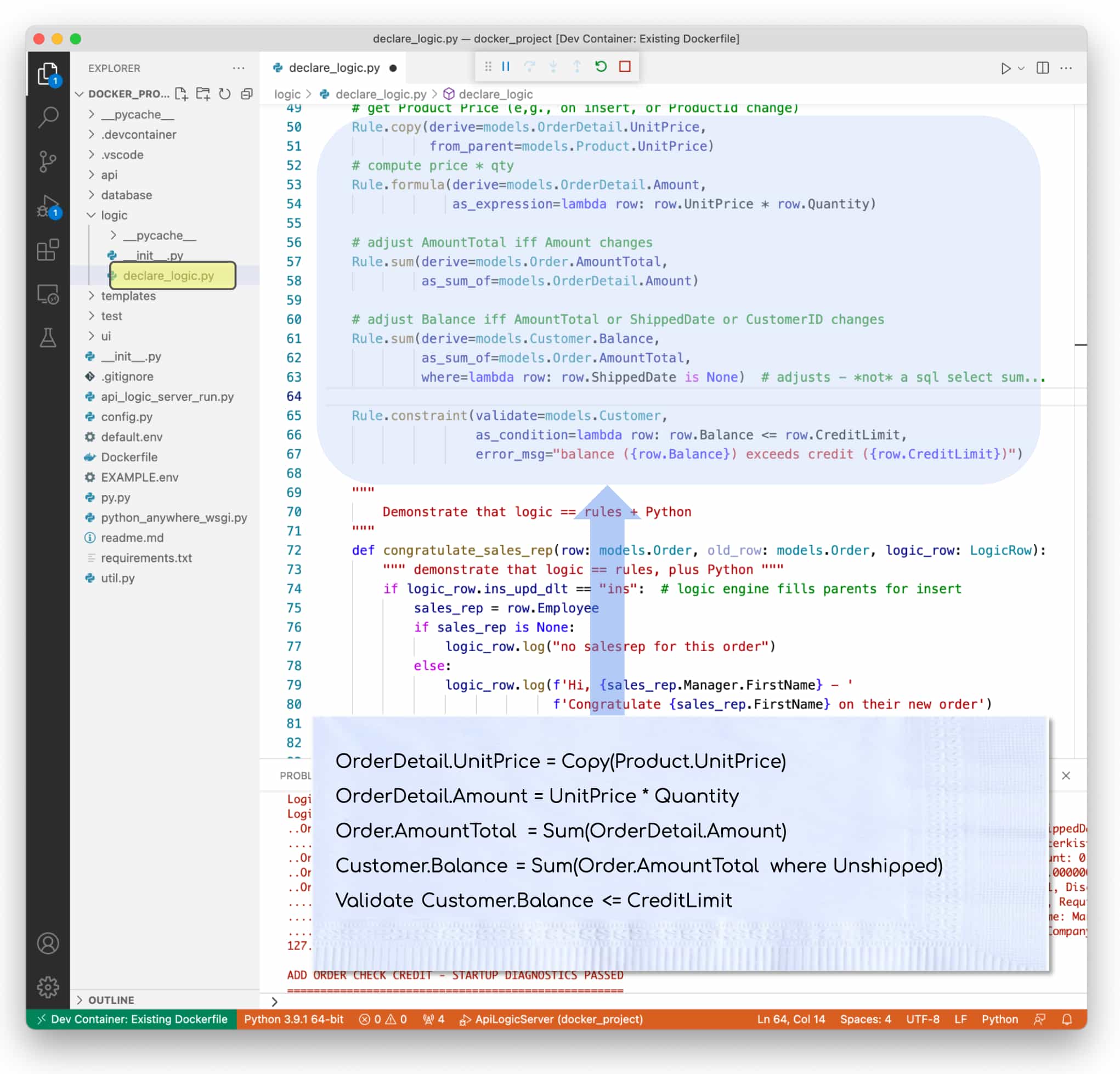 The API and web app (below) were automatically created from the database. So, you'd see these running with your own databases.

To allow you to explore customization, the rules above were pre-installed for the demo project — you'd normally enter these in Python, using code completion. 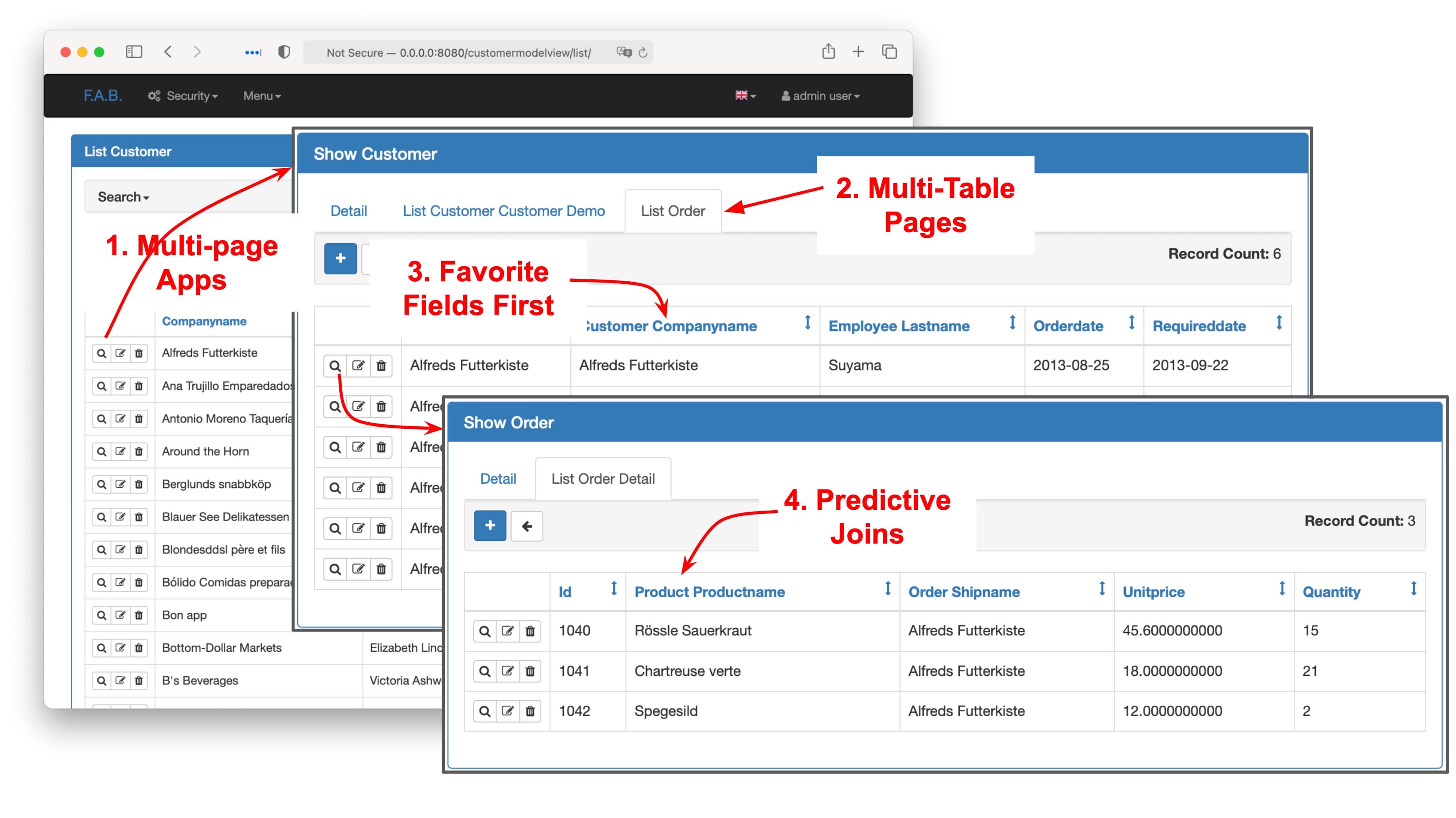 An API and web app are a good start, but we all know 100% automation is not possible. There needs to be provisions for customization, using standard languages, tools, and approaches.

Let's now look into customization. But first, we'll lay out the basic architecture.

As shown below, there are typically 2-3 "machines" in operation:

Recall the process to install and start ApiLogicServer: with Docker running, use a Terminal window (Windows: use PowerShell):

Note: Docker is the simplest install, but you can also use a local version of Python and pip install

The created project is a standard Python project, fully customizable using your existing IDE and other development tools (e.g., git). For example, you can load the project in Visual Studio Code as follows:

3. You will be prompted to install the remote-container extension, and reload the project in the container; do so

Here is the created project, opened in VS Code: 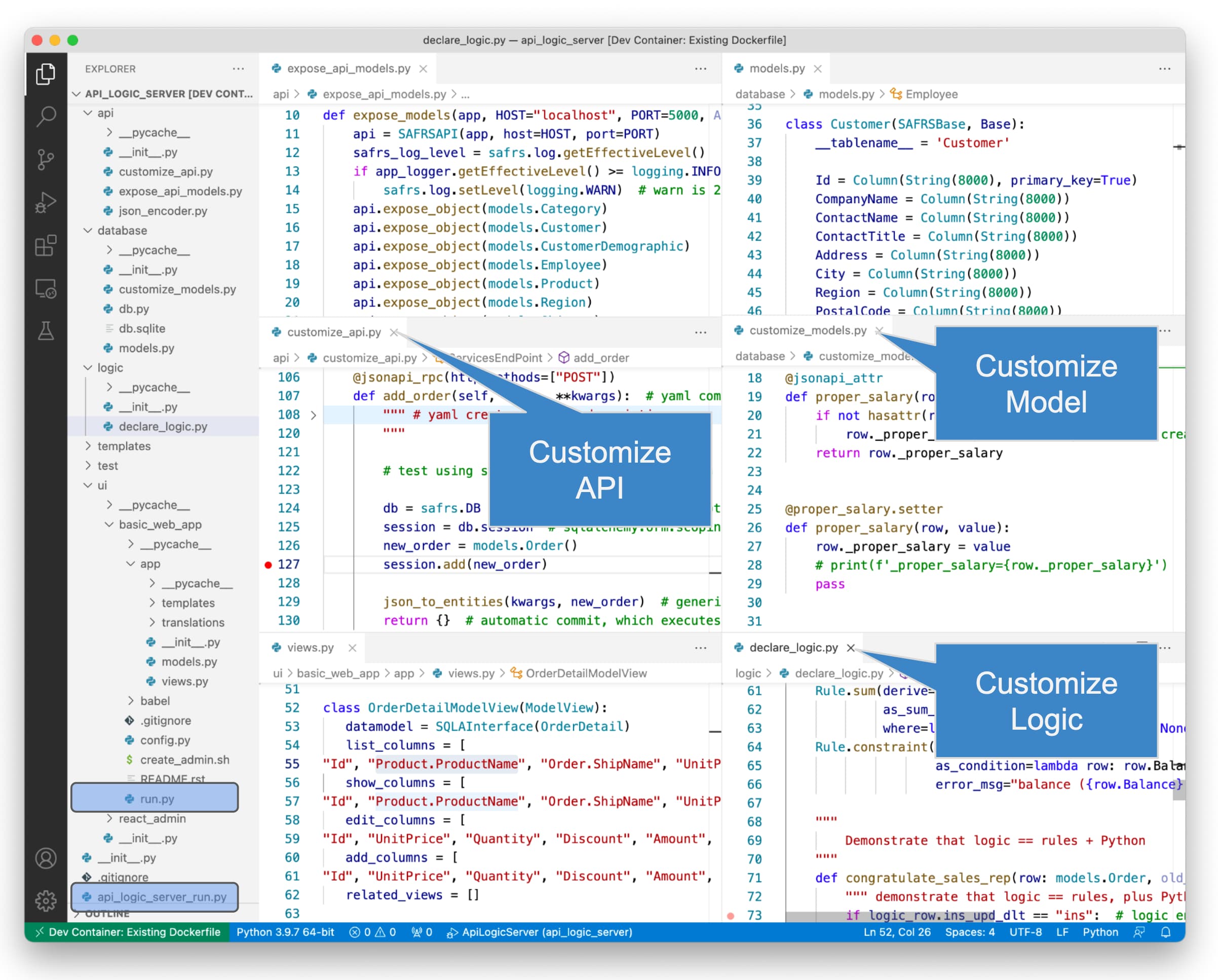 The created project is extremely small since the created code defines declarative models, rather than low-level procedural code. Not only does this make it small, but it also makes it very easy to customize the behavior.

For example, the API is defined (api/expose_api_models.py — upper left code pane) with statements as shown below. It's instantly obvious how to alter this code, e.g., to not expose a given table as an endpoint.

The same applies to ui/basic_web_app/app/view.py — it's clear how to control what fields are displayed (including joins), and in what order:

Since the project is standard, you can use your existing IDE services such as code completion and debugging.

For VS Code, the created project includes pre-built launch configurations for ApiLogicServer and the Basic Web App. You can set breakpoints, examine variables, step through code, etc. 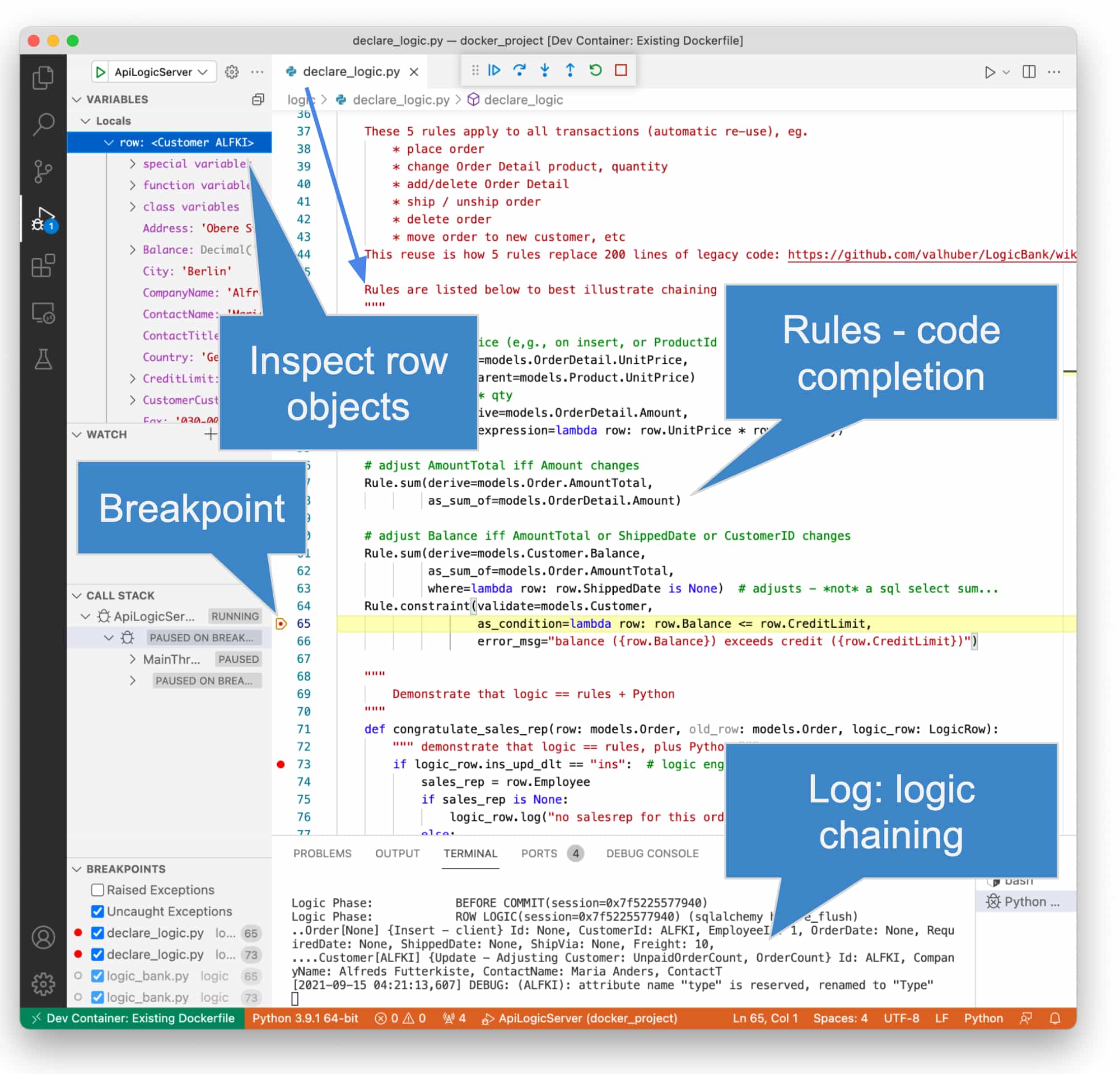 In this tutorial, we’ve shown how to use an API Logic Server to create, customize and run a Database API. Working Software Now from a database: an API and a web app, supported by spreadsheet-like logic. The project is customizable, using standard language and tools, operating in an isolated containerized development environment.