Primitive container technology has been around since the late 1970s but didn't become prominent until Docker debuted in 2013. From that point, containers have exploded in popularity; they are dramatically changing the DevOps landscape and the way we build, ship, and run distributed applications. It's no coincidence, then, that Docker's growth and container usage are developing in synchrony.

Container orchestration tools offer useful and powerful solutions for creating, managing, and updating multiple containers in coordination across multiple hosts. On top of that, orchestration allows you to share data between your services and process tasks asynchronously. Within your production environment, you can run multiple instances of each service over multiple servers to make an application highly available. The more we simplify orchestration, the deeper we can dive into the application and break down smaller microservices — which raises the question, Which tool do you pick to conduct your symphony?

In this article, I'll be comparing the three major players in container orchestration to help you choose the right one for you.

Container orchestration relies heavily on your infrastructure, meaning it is important to look at how these solutions integrate with your current cloud provider/on-premise solution. Are you willing to buy into one cloud provider's entire toolchain, or do you need something more diverse?

Swarm is Docker's own orchestration tool which is now fully integrated with Docker Engine and makes use of the standard API and networking. Built into the Docker CLI, Swarm Mode requires no additional installation, and new Swarm commands are easy to pick up. Deploying a service can be as simple as using the docker service create command. Docker Swarm is fighting back against Kubernetes for the lead in the popularity race by making strides in performance, flexibility, and simplicity to gain renewed adoption.

Amazon Elastic Container Service (ECS) is Amazon's proprietary container scheduler and designed to work in harmony with other AWS services. This means that AWS-centric solutions like monitoring, load balancing, and storage integrate easily into your service. If you are using an alternative cloud provider to Amazon — or if you are running your workload on-premise — then ECS is probably not a fit.

Developed from 15 years of working with Linux containers, Kubernetes (abbreviated to K8s or Kube) is Google's open-source answer to container management. It works in multiple production environments including bare metal, on-premise VMs, most cloud providers, plus combinations/hybrids of all three.

Kubernetes installation is the most complex out of all three, but the process is simpler with the right tools. For integration with existing orchestration systems or bare metal environments, kubeadm works well. Helm is a popular tool that streamlines installing and managing  Kubernetes applications. One of Kube's major advantages is that you have ultimate control over its configuration, and more common platforms have plenty of documentation to support your tailored setup. On top of that, Kubernetes has a vast community of users and resources to tap into for support on Slack, StackOverflow, and GitHub if you encounter any problems.

Docker Swarm extends single-host Docker, allowing developers to quickly and easily deploy multiple containers and microservices. Of the three tools, it's the most lightweight and easiest to transition to, as it's already built into Docker Engine.

Swarms are a cluster of nodes that are comprised of: 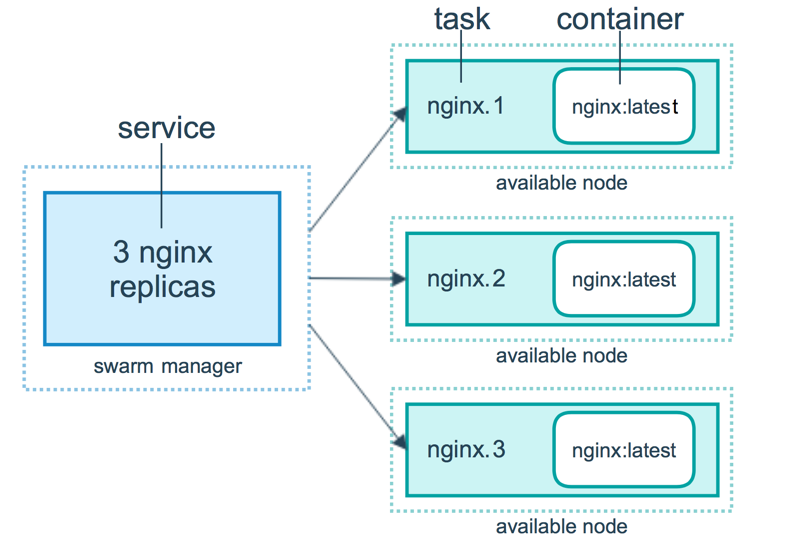 Swarm is great for people just starting with containers or who don't need to configure every little detail. Most importantly, Swarm allows you to scale your containers to dramatic numbers with ease.

Swarm Mode installation requires no special effort, as it's already a part of Docker Engine. The feature comes as standard starting with version Docker 1.12 and above.

AWS's own container management service, Amazon ECS, is a Docker-compatible service that allows you to run containerized applications on EC2 instances and is an alternative to both Kube and Swarm.

While Docker has won everyone over with its simplicity, Amazon ECS is a comparatively complex tool, as you have to learn a whole new platform. Components within ECS consist of:

Amazon ECS provides maximum value for those looking for seamless integration between containers and other AWS services. It's a fully managed service that offers high availability, scalability, and security. On top of that, your AWS support plan includes it as standard.

Are you tied to AWS? It might make sense to use ECS over Kubernetes, and vice versa if Google Cloud is your provider. Are you most keen on configurability and are you willing to labor over complexities for your perfect service? Kubernetes should be your platform of choice.