TL;DR: Even jaded IT veterans are sitting up and taking notice of the potential benefits of Docker's microservice model of app development, deployment, and maintenance. By containerizing the entire runtime environment, Docker ensures apps will function smoothly on any platform. By separating app components at such a granular level, Docker lets you apply patches and updates seamlessly without having to shut down the entire app.

The tech industry is noted for its incredibly short "next-big-thing" cycles. After all, "hype" and "tech" go together like mashed potatoes and gravy. Every now and then, one of these over-heated breakthroughs actually lives up to all the blather.

Docker is a Linux-based development environment designed to make it easy to create distributed applications. The Docker Engine is the packaging tool that containerizes all resources comprising the app's runtime environment. The Docker Hub is a cloud service for sharing application "artifacts" via public and private repositories, and automating the build pipeline.

Because Docker lets developers ship their code in a self-contained runtime environment, their apps run on any platform without the portability glitches that often drive sysadmins crazy when a program hiccups on a platform other than the one on which it was created.

It's natural to compare Docker's microservice-based containers to virtual machines. As Lucas Carlson explains in a September 30, 2014, article on VentureBeat, you can fit from 10 to 100 times as many containers on a server than VMs. More importantly, there's no need for a hypervisor intermediation layer that's required to manage the VMs on the physical hardware, as Docker VP of Services James Turnbull describes in a July 9, 2014, interview with Jodi Biddle on OpenSource.com. 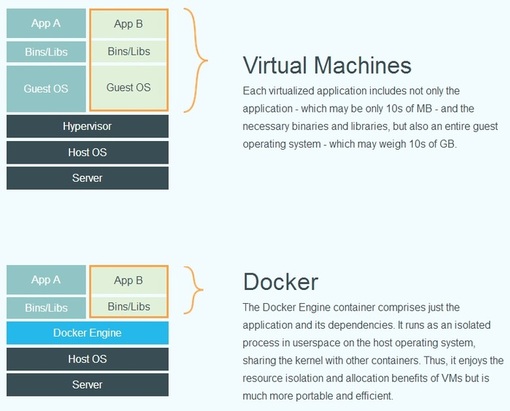 Docker containers are faster and more efficient than virtual machines in part because they require no guest OS or separate hypervisor management layer. Source: Docker

Because Docker offers virtualization at the operating system level, the containers run user space atop the OS kernel, according to Turnbull, which makes them incredibly lightweight and fast. Carlson's September 14, 2014, article on JavaWorld compares Docker development to a big Lego set of other people's containers that you can combine without worrying about incompatibilities.

You get many of the same plug-and-play capabilities when you choose to host your apps with the Morpheus cloud database-as-a-service (DBaaS). Morpheus lets you provision, deploy, and host MySQL, MongoDB, Redis, and ElasticSearch on a single dashboard. The service's SSD-based infrastructure and automatic daily backups ensure the reliability and accessibility your data requires.

Morpheus deploys all your database instances with a free full replica set, and the service's single-click DB provisioning allows you to bring up a new instance of any SQL, NoSQL, or in-memory database in seconds. Visit the Morpheus site for pricing information or to sign up for a free trial account.

Services such as Morpheus deliver the promise of burgeoning technologies such as Docker while allowing you to preserve your investment in existing database technologies. In a time of industry transition, it's great to know you can get the best of both worlds, minus the departmental upheaval.