In my previous article, I discussed how to set up AWS Elastic Container Service (ECS) for microservices using a Fargate launch type. In this article, I'll outline a step-by-step procedure to create a continuous integration & delivery pipeline for ECS. This would essentially be a continuation of the previous article and would use the same ECS setup that was configured.

I have a microservices application built in Spring Boot. I used Maven as my build tool and the Spotify plugin to build my Docker image. Following are the relevant sections from my pom file that show the complete Docker-related configuration:

The imageName is the ECS registry URL followed by the project artifact id. The ECS registry URL is typically of the following format: <12 digit AWS account id>.dkr.ecr.<AWS region> .amazon.com . The command to execute the application goes into entryPoint. Once the Docker image is generated, two tags will be created: the version number and the "latest." Setting forceTags to true will ensure that tags are overwritten; that is, the latest and the greatest version will always carry the "latest" tag.

In addition to my pom file, I have a buildspec.yml file in my project root folder. It's important to place this file in the root folder as AWS CodeBuild expects this file to be in that location. This file contains the build script that will use Maven to build and push a Docker image to our repository. Following is the script that I used:

The next step is to jump into AWS CodeCommit and create a repository. Let’s call it hello-fargate-code. Once that’s done, the project has to be committed to this repository. We are now ready to build our pipeline.

On the AWS console, browse to CodePipeline > Create Pipeline.

Enter a name for the pipeline and move to the next page.

On the next page, select AWS CodeCommit as the source provider. Select the repository hello-fargate-code, the default branch, and click on "Next step." 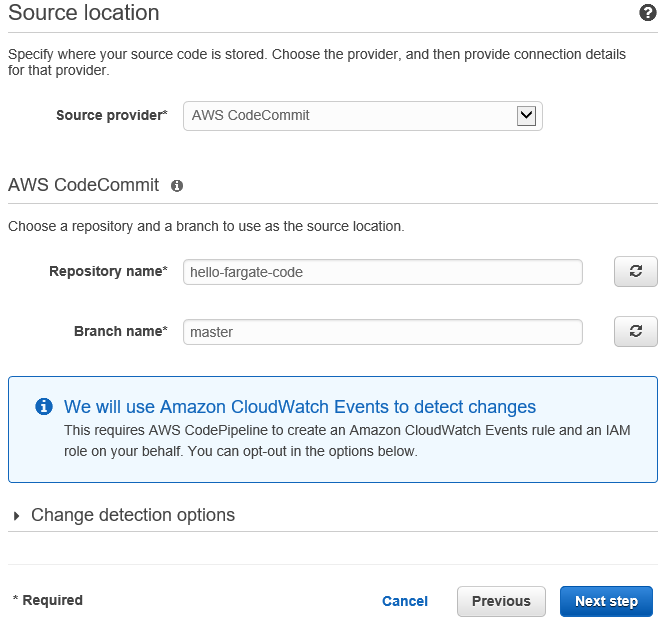 Select AWS CodeBuild as the build provider. In the configuration section, opt to create a new project and enter a project name.

In the next section, we need to instruct CodeBuild on how to build the project. We already have a build script that uses Maven as well as Docker commands. Select Ubuntu as the operating system.

Selecting the runtime for this one is a little tricky. Please be aware that selecting Docker as the runtime will result in a build error, as the Maven commands will fail without a Java runtime. On the other hand, selecting Java would result in the failure of the Docker commands. The way out is to select Java as the runtime and let CodeBuild know that we need to generate a Docker image as well. To do that, scroll down to the Advanced section and check the Privileged box. This will ensure that our build script is executed successfully. 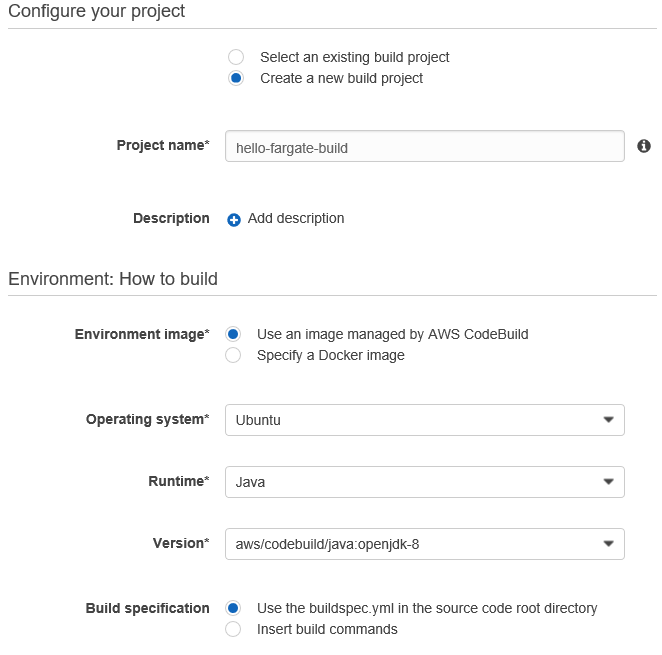 Clicking on "Save build project" will now save the project. Clicking on Next step will take us to the deployment phase. 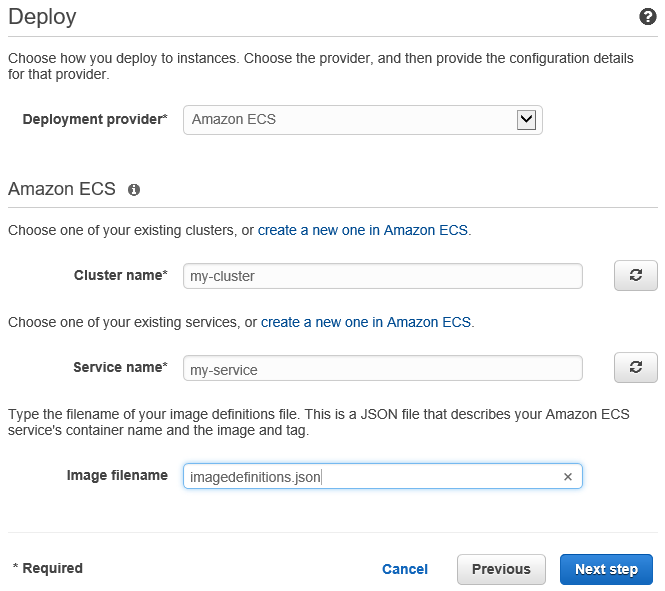 That’s it. Once this pipeline is created, it’ll start a build with the current code in the repository and deploy it to our ECS cluster. The ECS tasks have a name followed by a colon (:) and a version number. Whenever a new version of a Docker image is pushed to the ECS repository and new tasks are deployed, the version number is auto-incremented. Subsequently, whenever there’s a code check-in, a successful build will result in a new deployment and a new version of tasks will be created.

As discussed in this article, the tools provided by AWS make container deployment pretty straightforward. On top of that, the ability to create an automated pipeline for continuous integration and delivery takes away the hassles of deployment and lets developers focus on their code.