CI/CD are the two cornerstones of any DevOps operation designed to yield fast and robust software. It is the way of developing software in which you’re able to release updates at any time in a sustainable way. When changing code is routine, development cycles are more frequent, meaningful, and faster. From this process we can make sure that only code that is known to be good becomes part of a software product.

In this blog, we will focus on the following topics

Initially, the team had no central build server of any kind. Source code may be stored in a central source code repository, but developers do not necessarily commit their changes on a regular basis. Sometimes before a release is scheduled, a developer manually integrates the changes, which leads to many issues such as last-minute conflict as many developers may be integrating at the same time or failure of components due to integration.

In order to overcome these problems, CI/CD was introduced which includes many advantages both from a technical and business perspective.

Continuous Integration is a development practice that requires developers to integrate code into a shared repository several times a day trying to avoid conflicts in the code.

Each check-in is then verified by an automated build, allowing teams to detect problems early. This allows teams to spend less time on backtracking and more time building new features.

The concept here is to have multiple devs on a project to keep the main branch of the repository to the most current form of the source code, so each dev can check out or pull from the latest code to avoid conflicts.

Developers develop their functionality in their own particular branch and then push their new branch to a collaborative repository. Automated unit and integration tests run and notify the team about the bugs and other code quality issues. Once the automated tests pass, the developer creates a pull request. A PR allows developers and reviewers to comment directly on the changes the developer submits to the main branch.

Upon completing the review process and merging the new code into the main branch, the feature development and bug-fix cycles continue from the integrated main branch. This often happens several times a day, especially for a large team with everyone working on many small tasks, and it means that everyone is working on the same common code base. Divergence of the code and the associated problems that can arise from feature developers being out of sync with each other are significantly reduced.

The continuously integrated code commits are further tested for performance and functionality until approved for release. Strong Continuous Integration is required to effectively execute Continuous Delivery. When properly implemented, developers will always have a deployment-ready build artifact that has passed through a standardized test process.

This process starts when the developer commits the code and ends after the testing is done in the Staging environment so that the code is ready to deploy into production. If there are any errors or bugs during the automatic testing, the CI tool automatically will notify the developer through any notification such as Email or SMS.

Continuous Delivery usually involves a production-like staging area, where changes are manually accepted before releasing it to Production.

The decision to release to production is more of a business decision than a technical decision.

Continuous Deployment does not require any manual testing to be done in the staging environment as automation testing will be performed in all the phases of the release.

Both CDs rely upon real-time infrastructure provisioning and application monitoring tools to discover any problems that were not caught in the testing feedback loops before deployment as there is no human verification. 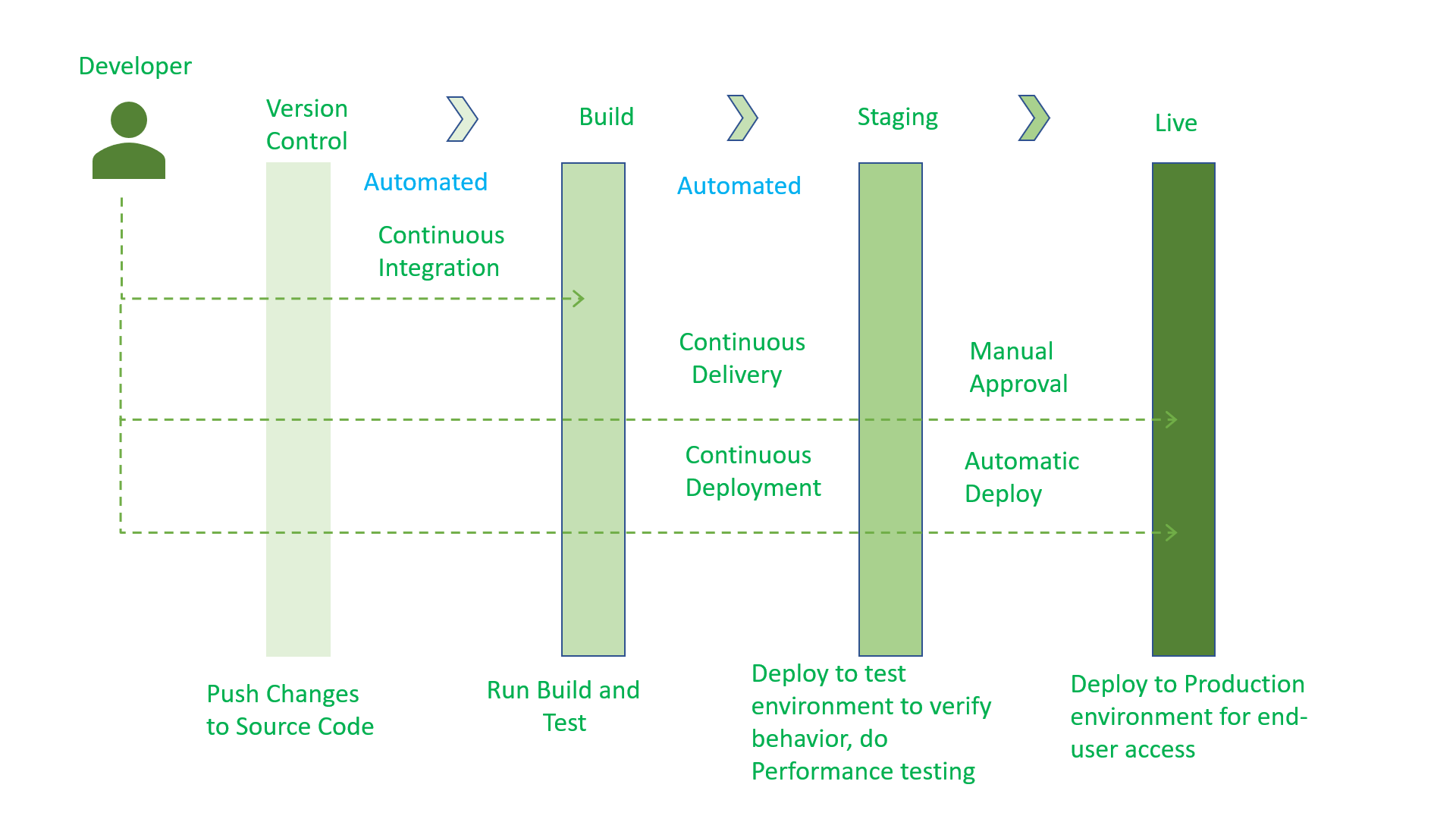 Many developers have the question of what an application works on their local machine but not in the higher instances. It is because there can be a number of things that are different between your local environment and where you push to production. Some of the Quality Assurance tasks, such as browser testing, can be automated mitigating the risk of a bug making it all the way through to the live site.

Failures are detected faster and can be repaired fast, leading to increased release rates.

All the team members must use the same source repository for maintaining their code. It will be clear to see what changes have be made and by whom.

A CI server checks for the test coverage for each build. Wherever you commit something new without the test classes, the server will throw an error as there is no sufficient code coverage so that the developers will work on to increase the coverage in the lower instance so that there will be no issues while deploying to higher instances regarding to code coverage.

Quality: From Good to Great

Incorporating CI/CD into your organization’s development process reduces the number of non-critical defects in your backlog. These small defects are detected prior to production and fixed before being released to end-users.

With deployments running in continuous cycles, this will enable you to track the project and provide feedback in real-time, as well as fix shortcomings within your team whenever necessary. With consistent reviews, the new product development will see more refinement and will be more in tandem with the end-user’s expectations.

Ensures code worked by several developers across multiple locations are always integrated into a common repository. This avoids the chaos that results from bulky and conflicting code commits.

In today’s rapidly changing competitive landscape, business leaders are struggling to release their products quickly to the market because it’s almost impossible to release a quality code without a proper, streamlined process in place.

However, moving to Continuous Integration and Continuous Deployment will change your software development process dramatically. It will streamline the entire process, thereby helping you to deliver a stable, secure, and better product.