Apple has released the new Xcode 8.3 beta 2 with the new Swift 3.1 snapshot, which is available to download from your Apple developer account. There are a lot of new additions and changes in Xcode 8.3 beta 2. You can read the release notes if you have an Apple developer account. There is a handy class added to the XCTest framework to enable interaction with Siri with XCUI Test, which is XCUISiriService. In this post, we'll look at how to enable interaction with Siri and asynchronous testing with XCTest

Newly added classes XCUISiriService and XCTWaiter are available in Xcode 8.3 beta 2. You can get it from the Downloads section of the developer account. Xcode 8.3 needs macOS version 10.12 and above. You can download the compressed ZIP file, which is around 4.52 GB. If you already have a previous version of the Xcode, then remove it — or you can keep it, but you have to switch between Xcode DEVLOPER_DIR. Once downloaded, you can extract the file to install Xcode 8.3 beta and wait for the installation of Xcode and the command line tools. Once Xcode 8.3 beta 2 is fully installed with all the command line tools, we can drag it into the /Applications path. Now, we have to switch to the new Xcode version by running the following command:

Now, make sure you export the toolchain and are using the correct version of Swift, which is Apple Swift version 3.1-dev at the moment. You can easily do that by running the following commands.

This will ensure that you are using Swift 3.1. Now we are good to try new the features of the XCTest framework.

The XCTest framework now has a new class, XCUISiriService, which has an 'activate' method, which takes strings (voice recognition text) and passes them to Siri. This string is then processed by Siri and returns the result. The siriService is a part of the XCDevices class and can be used like so:

Let's cover how to use the XCUISiriService to interact with Siri by creating a sample application with a few tests.

Let's create a new Xcode project as an iOS app with unit and UI testing templates and name it XCUISiri. Now we should have a default iOS app with template UI test code. 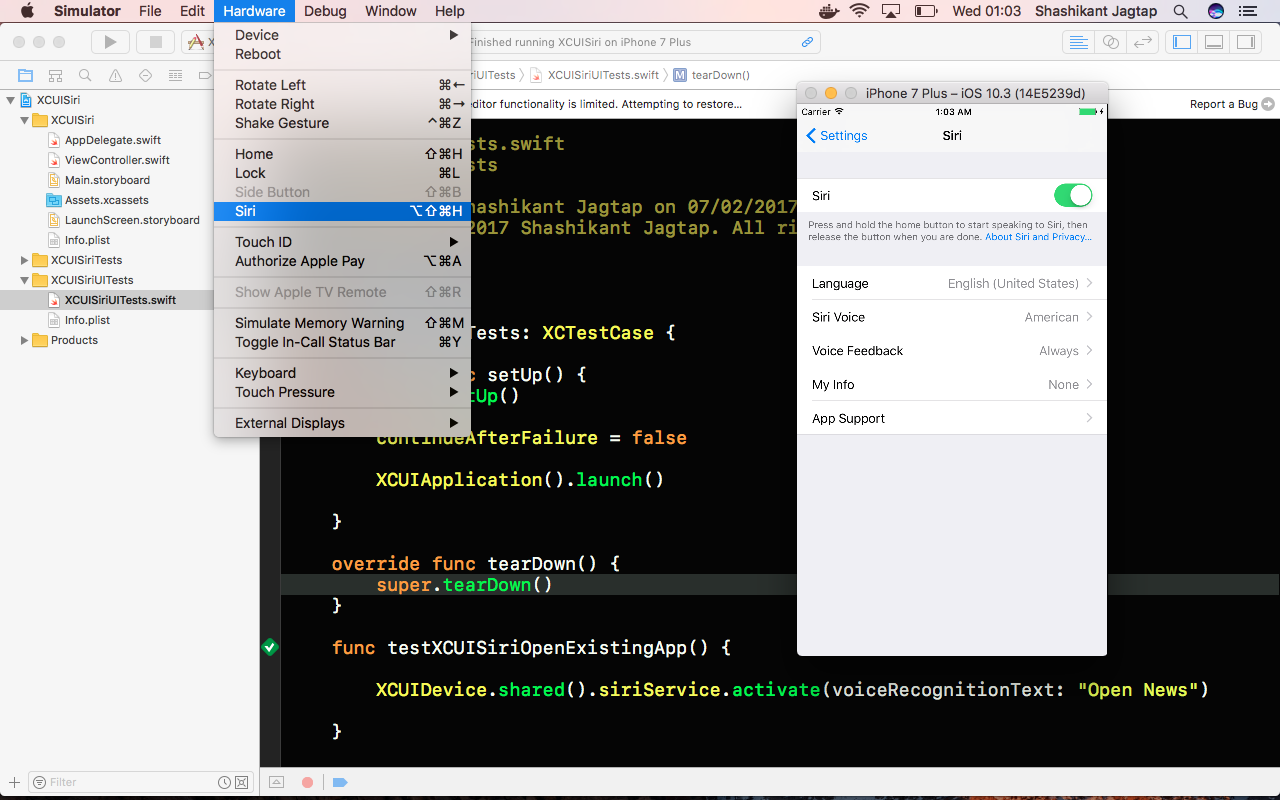 Now we are all set to try XCUISiriService. Let's add one more test to use XCUiSiriService.

We can easily guess that the code above is telling Siri to open Apple's 'News' application. Let's run the test by pressing CMD+U.

You can see that the tests have opened Siri and passed the 'Open News' string to it. Siri then acts on it and opens the Apple News app. In this way, we can literally pass any string to Siri and let Siri act on it.

There might be potential benefits we can get out of this XCUISiriService class in XCUI tests. Here are some possibilities

The XCTest framework allows developers to write unit and UI tests for iOS and macOS apps. Apple introduced Xcode UI testing in the WWDC 2015, which allows us to write UI tests within the Xcode. As part of the Xcode 8.3 release, Apple has added a couple of new classes to the XCTest framework to support asynchronous testing. It means there are no handlers involved while waiting for the XCUIElement to appear. Previously, we had the waitForExpectations(timeout: handler:) method combined with XCTestExpectation to test asynchronous code, which looks like this:

This piece of code will wait for three seconds to find the button, and it will fail after three seconds if it doesn't find said element. We have passed nil to the handler, which invokes error once the timeout is reached. This causes the test to fail, as well as an error to be thrown. It's very generic and not often useful while debugging. Luckily, we now have better control over errors and handlers with XCWaiter.

The XCTest framework now has XCTWaiter class to wait for the element. The list of the newly added classes and sub-classes are as follows:

XCWaiter class returns results of the expectations in the form of boolean. It returns an enum of four possible situations — .completed, .timedOut, .incorrectOrder, or .invertedFulFilment. We can simply add an extension to XCUIElement or add a simple function that returns the result of the waiter function, which returns one of the results from XCWaiter.

There is no callback block or completion handler. The helper method simply returns a boolean indicating if the element appeared. Let's briefly go through each of the boolean results returned by XCTWaiterResult to understand what it is doing.

This will return true when expectations are not met within the timeout period. We can define how to fail our test case by providing useful error messages for debugging.

This tells us the expectations that succeeded and which are still waiting to succeed. We know what is taking time to diagnose the problem.

Not entirely sure how it works, but as per docs, if an expectation is set to have inverted behavior, then fulfilling it will have a similar effect of failing to fulfill a conventional expectation.

We can then pass this expectation to the XCWaiter to get a boolean result. You can find some examples in the demo repo here. 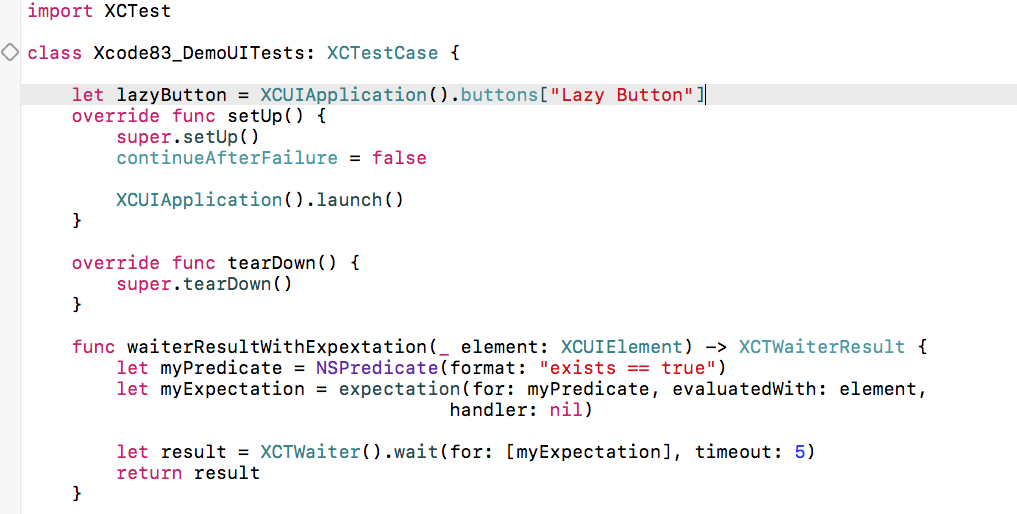 XCWaiter gives us boolean results from each expectation, which allows us to define our XCTest with better control. This might help to deal with the flakiness of tests. XCWaiter results simply return whether an element appeared or not.

We can define more than one expectation and wait for XCWaiter to return results for each of them. As mentioned above, expectations can be written in a more readable way.

Previously, XCtest used to fail if expectations were not fulfilled within the specified timeout, and the error was very generic. Now we have the .timedOut  result from XCWaiter so that we can control test failures with proper error messages.

XCWaiter gives us more control over how we want to define test failures. This will reduce the flakiness of our tests. The XCWaiter results can also give us the ability to fail or pass tests with proper error messages.

I have created a GitHub repo, Xcode83_Demo, with a sample iOS application to give the XCWaiter a try and experiment with XCWaiter features. Feel free to clone it and give it a go.

Now, if you run tests using CMD+U then you should see tests running.

The new class XCUISiriService in XCTest exposed the ability to automate AI-related tasks with XCUI Tests. Also, XCTWaiter makes asynchronous testing possible with XCTest. Hopefully, we will get some more insight once the stable version of Xcode 8.3 is released.