nested classes , eg. anonymous classes, are often more convenient than creating separate classes, especially when working with something like the command pattern or event listeners. for example:

but there comes a point when the nested class becomes so bulky that code becomes unreadable. and sometimes you want to reuse the same class in another place – something that’s difficult with anonymous inner classes.

the answer would be to change the nested class into a top level public class (or a first-class citizen, if you like) that exists in its own file (eg. somethingusefulactionlistener.class ). but doing this manually can take a lot of time and is error-prone.

eclipse has a couple of refactorings and quick fixes that help to make the job a lot easier. converting an anonymous inner class to a top level class requires two refactorings only and will take you a couple of seconds instead of minutes. a (named) inner class takes only one refactoring. and passing arguments to the new class is also easy if you use some of eclipse’s quick fixes.

convert the anonymous inner class into a top level

here are the instructions, but there’s also a video below with a quick example. 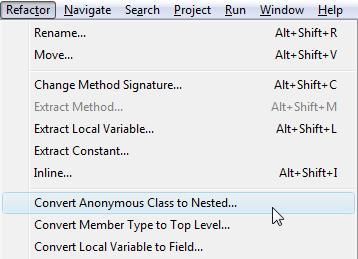 2. enter a name for the new nested class, select public as the visibility and deselect declare the nested type as final . 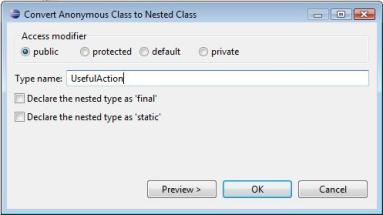 3. click ok. eclipse will create a new nested class inside the enclosing class and leave the constructor call where the anonymous class used to be declared.

4. now convert the nested class into a top level class by standing on the class name and choosing refactor > convert member type to top level… (or alt-t, v ). a dialog prompting for the enclosing instance name will appear. 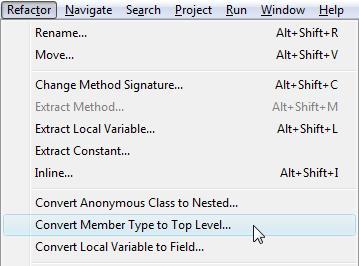 5. (optional) if you want to access the enclosing class within your new class, then enter a name for the field that will be assigned to the class. i normally leave this blank.

6. click ok. eclipse will create the new class ( usefulaction.class ) and move it to a new file in the same package.

here’s a quick video to show you how easy this is. in the example, we’ll convert an anonymous inner actionlistener class to a class called usefulaction.class .

passing arguments from the enclosing class into the new class

there isn’t a one-shot way to do this, but there are techniques to make it go a bit faster. one trick is via the following steps:

the easiest way to see how this works is to watch the following video. in the example, i’ll pass the fields name and address to the new class .