The following post aims to introduce Cooperative MARL and goes through innovations by S. Whiterson Lab, with QMIX (2019), and their current contributions for NeurIPS 2021. Going through this article might imply having certain fundamentals about Reinforcement Learning.

A multi-agent system describes multiple distributed entities: so-called "agents" that take decisions autonomously and interact within a shared environment (Weiss 1999). MARL (Multi-Agent Reinforcement Learning) can be understood as a field related to RL in which a system of agents interact within an environment to achieve a goal. The goal of each one of these agents or learnable units is to learn a policy in order to maximize the long-term reward, in which each agent discovers a strategy alongside other entities in a common environment and adapts its policy in response to the behavioral changes of others.

Properties of MARL systems are key to their modeling.  Depending on these properties, we might branch into specific particularities of areas of research.

Table 1. This taxonomic schema (Weiss 1999) proposes to let us know more about the MARL exploration we will talk about today. In cooperative MARL, agents cooperate to achieve a common goal.

From the environment perspective, we can enunciate several challenges :

When we branch from MARL into Cooperative MARL, we focus on reformulating the challenge into a system of agents that interact within an environment to achieve a common goal. These challenges might have more importance depending on the type of behavior and environment. From the conceptual challenges derived from the agent interaction and performance perspective inside cooperation, we can think of the following derived from:

From now on, we will focus on centralized cooperative MARL and QMIX definition, notation, and description. 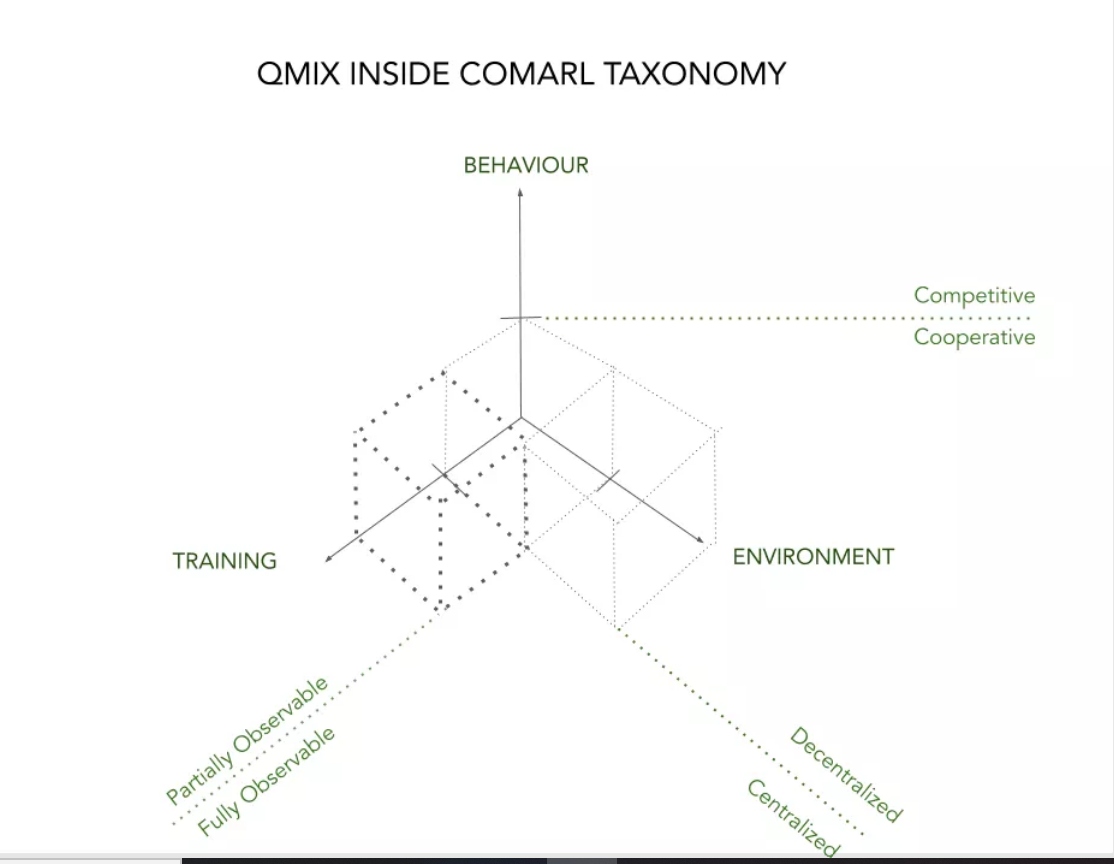 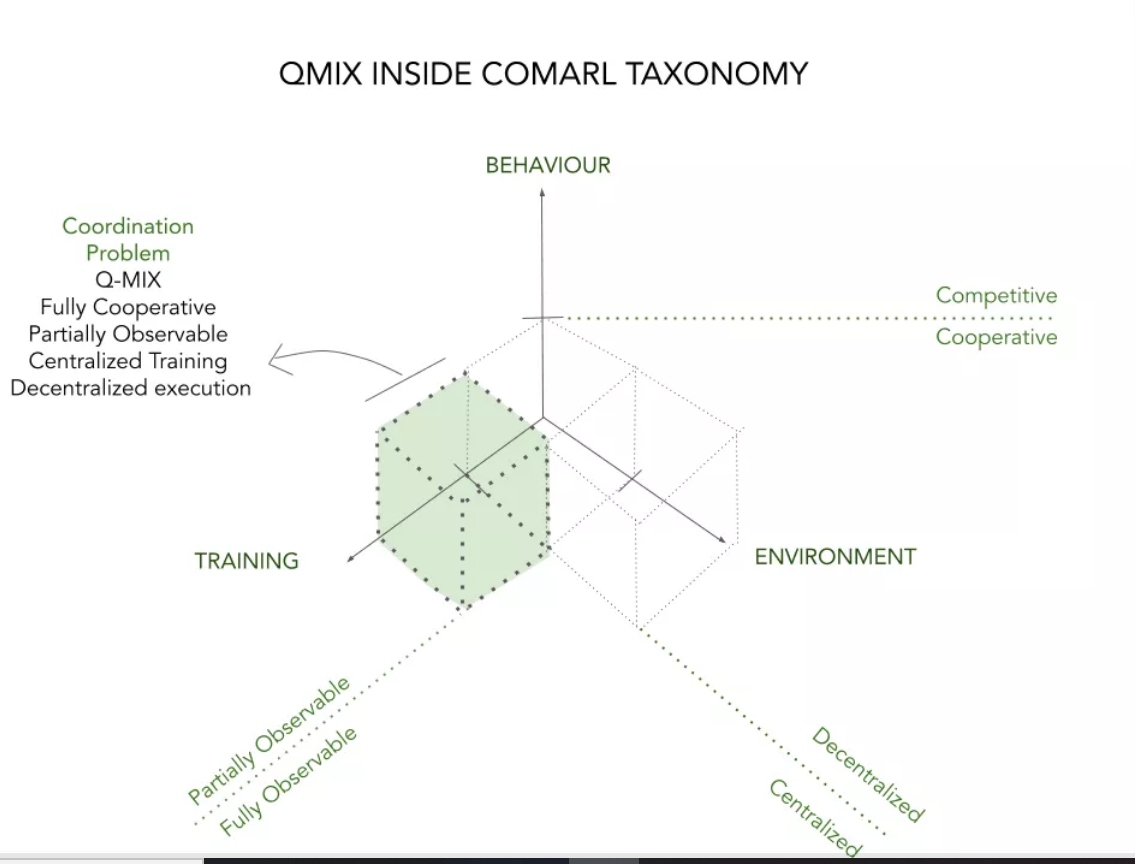 The above images are a visual representation of MARL properties with some challenges regarding the taxonomy. The zoomed-in area includes areas inside Cooperative AI posted in Open Problems in Cooperative AI and Q-MIX papers.

Regarding notation, the main differences between the notations for RL are that we introduce in the tuple the parameter N that stands for the number of agents, and O = { O1,…On } that is the set of observations for all agents. If different agents have different sets of observations, all of them might be represented in this set. The same happens for the set of observations U = { U1 …Un } stands for the joint action set for all agents, meaning that the action will be taken in a cooperative manner, even though this shall mean that each agent takes a different action. Therefore, taking into account the tuple < N, S, U, R, P, O, ץ > 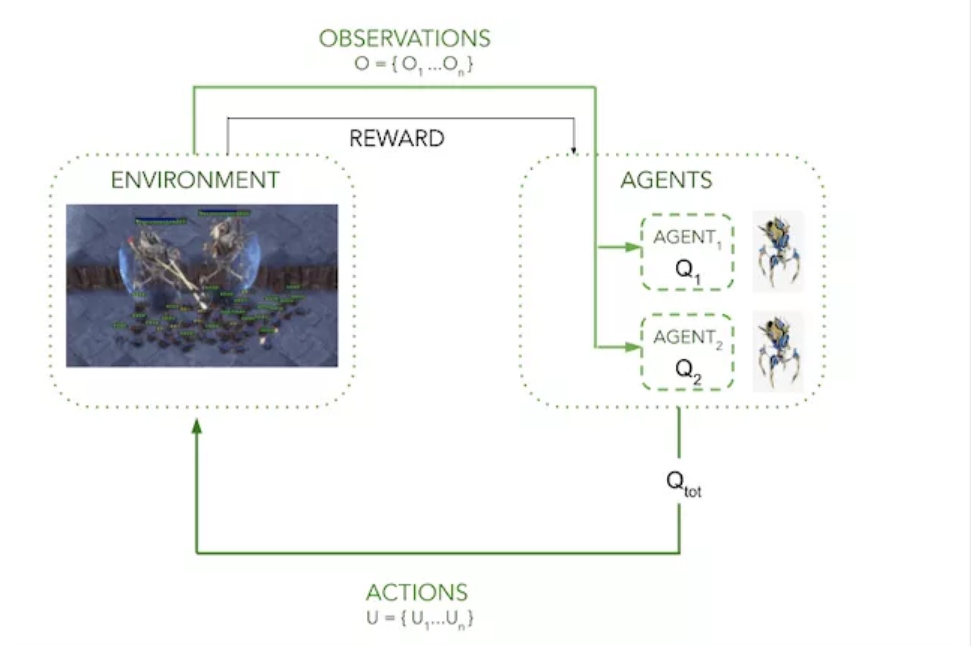 The images above are a visual representation of a fully cooperative and partially observable multiagent environment Dec-POMDPs. The example takes SMAC environment 2c_vs_64zg: at each time step t, the environment sends observations to the agents (2 Colosi) about enemy positions and actions of both enemies and the other agent, and each agent (Colosi) produces an action based on their Qtot value function. All the agents share the same reward.

Regarding a fully cooperative behavior with centralized learning with decentralized execution, the joint action-value function Qtot can be decomposed into N Q-functions for N agents, in which each Q-function Qi  measures how good each action is, given a state, for the agents following a policy

Q-Mix paper (published in 2018 by T. Rashid, et al) explores a hybrid value-based multi-agent reinforcement learning method, adding a constraint and a mixing network structure in order to make the learning stable, faster, and ultimately better in a controlled setup.

One of the main first ideas is to verify a constraint that enforces the monotonicity of the relationship between the global action-value function Qtot and the action-value function of each one of the agents Qi in every action. This constrained action allows each agent to participate in a decentralized execution by choosing greedy actions with respect to its action value function.

This function allows each agent to participate in a decentralized execution by choosing greedy actions with respect to its value function.

The image above depicts the overall architecture of QMIX proposed by QMIX paper with the main components: the mixing network with the hypernetwork, which forces monotonicity, and the agent networks.

During #Neurips2021, the lab will present the challenge of practical severe overestimation Q-MIX presents, proposing a regularization-based update scheme that penalizes large Qtot values that stabilizes learning and a softmax operator that reduces overestimation bias.

Overestimation is an important challenge because it indeed can be accumulated and be counterproductive for the performance of value-based algorithms. Besides, the fact that there are multiple agents inside a MARL scenario derives into the joint-action space exponentially increasing with the number of agents, and this can be considered an issue. In the case of Q-MIX, the overestimation phenomena can not only come from the calculation of Qi but also from the mixing network.

First, the paper presents some key experimental results from some mental models to tackle the challenge that didn´t show the desired outcomes: a gradient regularization of the mixing network and a baseline with Qtot by adding a regularized term to the loss  λ (Qtot(s,u) − b(s,u))2, where they used the mean squared error loss and λ is the regularization coefficient.

As the final proposal that showed better empirical results, they used a softmax for the joint action-value function (softmax(Qtot(s,u)) with principles from Deep Q-Learning, using the state and not the action-observation history τ as in QMIX Value Decomposition Networks approach.

For knowing more about this contribution, don´t hesitate to read their paper here.

Published at DZone with permission of David Suarez. See the original article here.