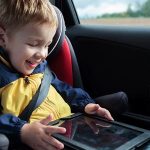 there seems to be a headlong rush towards driverless technology, with ford’s jim mcbride suggesting recently that they will be on public roads within five years.

despite this impressive progress, it’s likely to be a little while yet until our roads are fully automated, not least because recent studies suggest that nearly half of motorists would like to retain full control of the vehicle.

it makes sense, therefore, to try and ensure cars are as safe as possible until driverless cars make the mainstream.  an unlikely tool in this battle comes via a game developed by a romanian startup.

the game, called mr bear driver , aims to enlist the children that often sit in the back seats during a journey to try and nudge their parents into driving more safely whilst also deepening their own knowledge of road safety.

the genesis of the game is remarkably simple. players are placed in control of a school bus full of playful looking animals, with the player required to navigate the bus around and pick up animals along the route.

where things get kinda cool however is that the game is equipped with gps so that the bus in the game replicates the speed of the car itself. so, if the real car starts going too fast, so does the car in the game. the aim is that this will nudge the child to plead for the adult driver to slow the vehicle down. if the car doesn’t slow down, then the player ends up losing the game.

the game was developed by the automobile club of romania and publicis romania for the federation internationale de l’automobile and will soon be available on both google and apple platforms.

it’s a nice way to get young people thinking about road safety, whilst also nudging their parents to think about their driving behaviors.