Sometimes you want a variety of answers that the bot you build choose from. And to make sure that the bot remembers what has been said during the conversation a script is a way to accomplish this.

Scripts can be included in flows. Let’s create a very basic flow that contains a script.

The flow we will create will suggest a random coffee drink, like so:

User: Suggest a drink!
Bot: Well, you’re putting me on the spot here. I’d go for a flat white!

To achieve this, we need to create a flow that contains the following elements: 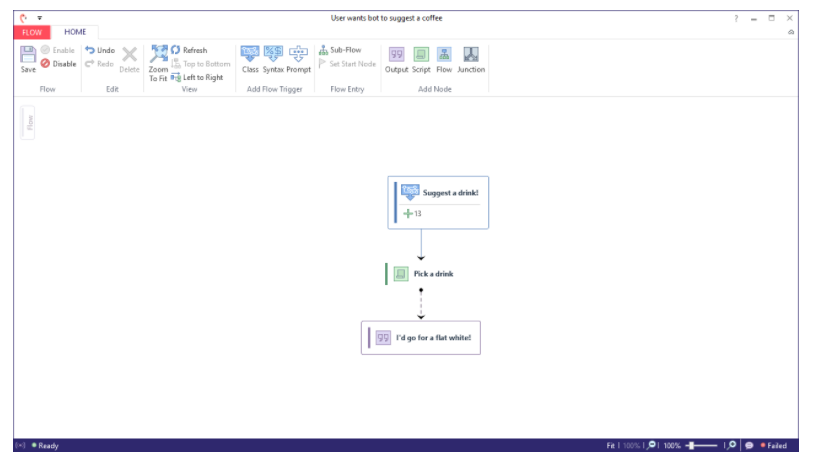 Create a New Flow and Populate the Trigger

Create a new flow and call it User wants bot to suggest a coffee. Then select the class trigger and add the following example inputs:

Give the trigger a name like Suggest a drink!. (Visual instructions of how to create a flow and populate the trigger can be found here.)

With nothing else in the flow marked, click the ‘Script’ icon in the ribbon. This will add an empty script node to your flow. Give it a name that explains what the script does, like Pick a drink.

Put the Script Node in Its Place

Currently, our script node is dangling and not connected to any of the other elements in the flow. However, we want our script to be executed immediately after the flow is triggered, and right before the output is shown to the user. To achieve this we need to follow these steps:

We have added the script node, but it is still empty. Now we’ll need to add the script that picks a random coffee drink to suggest to the user. Select the script node in your flow, open the ‘Script Action’ tab on the right sight of the screen and paste the following code into the script node:

As you can see in the script node above the first two variables (coffeesToSuggest and number) are preceded by def which means they are local variables that are only available inside the script node. They will be forgotten immediately after the script is executed, in this case, this will happen when Teneo moves on to the output node. However, we want the outcome of the script (the coffee chosen by the script node) to be available outside of the script so we can use it in our output text. So we will need to store the value in a flow variable that we can use later on.

To add a flow variable, proceed as follows:

You can use the back arrow at the top to go back to the main flow view.

Add Answers to the Output

The user is full of anticipation so let’s provide the answer. Add the following answer texts to the output node:

As you can see we have used the flow variable coffeeSuggestion in our answers. This placeholder will be replaced by the value picked in the script node. Finally, give the output node a name like I'd go for a flat white!

That’s it! Save your flow and give it a try in tryout.

Extra Challenge for the Brave!

If you’re up for an extra challenge: often there are multiple ways to design a flow. In this case, for example, you can also model this flow with 3 separate output nodes (for each coffee type suggested). Can you figure out what the design of the flow would be when taking that approach? Hint: transitions can contain script conditions too!