i believe most software developers at one point in their lives as a youngster (young person) may become compelled to create games to help them learn a programming languages (i know i did). back in the day my first computer was actually a franklin ace 1000 and later an apple ][ . while developing games on those systems it was pretty challenging. for starters you had to learn assembly language (6502) and there were virtually little to no tools to create sprites (graphics assets). one of my favorite games that i believe was probably the first real time strategy (rts) game was rescue raiders (1984).

let's fast forward to 2012 where computers, graphics tool kits, libraries, and game engines have come a long way since then. many apis will provide much of the plumbing that will shield the user of the api so that they may focus on making their games fun and exciting. speaking of apis javafx 2.x is not only a great ui toolkit to create nice looking applications, but you can make fun games. with javafx 2.x you will be able to create games that can kill time with hours of fun!

growing up i was always fascinated with science fiction movies such as star wars and star trek . i've always wanted to create a simple top view display game (2d) where i could control my spaceship similar to the classic game asteroids. however as time went by a friend shared with me the game star craft 1 and brood wars i was just astonished. i really like the game play still to this very day, so i wanted to adopt some of the elements of the game such as navigating units and troops using the mouse pointer and buttons (ie: the terran battle cruiser).

in this blog entry (part 1) i will be briefly explain the game play or navigation of a simple spaceship using simple shapes. there isn't code to show in part 1 (this blog entry), but a simple application to demonstrate how the ship will behave in the final game. as we progress through the series you will notice incremental changes such as cool sprites, sounds, etc. remember the final game will just be a spaceship avoiding enemy ships and firing back with sound effects. the ship will appear like the one depicted at the beginning of this blog entry (figure 1).

i would like to create a series of blog entries ( six parts ) detailing tutorials to create a javafx 2.x game. below is a brief summary of the series:

shown in figure 2 is a simple prototype using simple shapes to help us focus on the math. a good principle is to create a functional prototype before investing a lot of time in drawing your graphics assets. 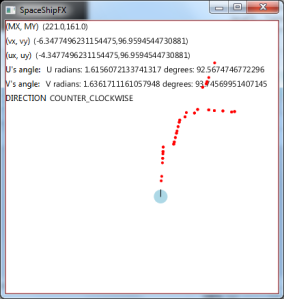 a simple prototype of the navigation and weapon systems for the spaceship.