This tutorial tries to explain how to get started writing your own custom StreamSets origin that supports parallel execution. This tutorial completes the excellent one by Pat Patterson available in the official SDC GitHub repository, which covers the creation process for a single threaded origin only. I highly recommend following that tutorial before starting with this one. This tutorial refers to the SDC version 2.4.0.0, but the process should apply to newer versions, as well.

What Is a StreamSets Origin?

In SDC, an origin stage represents the source of data for a pipeline. An origin reads data from some source, producing records to be consumed by the remainder of the pipeline. Several origins are currently available in the SDC libraries and they cover the most popular data sources, but it is possible to implement custom origins through Data Collector APIs.

Creating and Building an Origin Template

The process to create an origin template is the same as described in Pat's tutorial. It requires Apache Maven. The first step is to create a new custom stage project. From a command shell, execute:

During the execution of this command, you will be asked for the groupId, artifactId, and Version for the project. Maven generates a template project starting from the archetype in a directory which name is the provided artifactId. This is the structure for a newly created project: 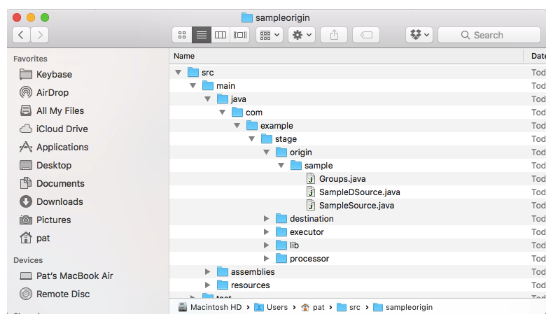 Through Maven, you can then add the files for the project to be imported in your favorite IDE. For Eclipse, move to the root folder of the project and then execute:

This involves a couple of different steps.

The template code contains a class called SampleSource.java that extends the SDC BaseSource abstract class. The first change to do is to make the SampleSource class to extend com.streamsets.pipeline.api.base.BasePushSource:

As you can see from the signature of the method that the main differences between this case and the single thread scenario are a Map of offsets instead of a single one and noBatchMaker argument (because any thread has to start and manage its ownBatchContext).

You need to add the code for the class (it could be an inner one) that implements the java.lang.Runnable interface:

Implement a constructor for it. In this example, we are going to implement just one expecting a single argument, an integer to identify at runtime any single thread instance:

The action is in the overridden run method. There, you need to start a com.streamsets.pipeline.api.BatchContext:

Then, generate some records to be added to the BatchContext:

And finally, processed by the remainder of the pipeline.

In order to allow the setup of the number of threads to issue at each pipeline run, you can add a configuration parameter to the SampleDSource.java class:

This way, you make it available in the origin UI. Its value can be made accessible from the Java code at runtime overriding the getNumberOfThreads parent method:

Threads scheduling and execution need to be done in the SampleSource produce method. One way to to this is to use an ExecutorService with Future:

This command also cleans up the threads that have been created previously.

To generate the final artifact, you need to run the following Maven command:

It will generate a tar.gz archive in the target folder of the project. Send the archive to the $SDC-HOME/user-libs directory of the destination SDC host machine and extract its content:

Restart SDC in order to make the new origin available for the pipelines.

Running the Origin in a Pipeline

After restarting SDC, you will see the new origin available in the origin list and you can use it in any pipeline same way as for the built-in origin.