Legacy software vendors that traditionally provide on-premise solutions still face a couple of architectural challenges. Those allow them to provide cloud-native applications as well as a solid foundation for offering a natural bedrock on which to construct bots, ultimately allowing them to offer a conversational user experience.

Many vendors of legacy software struggle to accomplish a smooth transition from a monolithic architecture to a cloud-enabled service oriented architecture, as such a transition involves rewriting, which comes at a significant price. However, the previous economic benefit of re-architecting to ensure a more efficient use of compute and storage resources is gone due to increasingly cheaper IaaS and PaaS services.

Re-architecting any major application is not only an expensive exercise, but it's also a daunting one. Prior to engaging in that, it is worth considering whether there is enough added value. It is true that by breaking down the monolith and splitting it into smaller services, you gain an advantage from the perspective of deploying modules independently, giving you greater flexibility when deploying new features to customers. Further, it allows you to organize teams more efficiently around specific domains — catering to more efficient teamwork, a higher degree of ownership, and more self-driven teams.

As most vendors would prefer to preserve and repurpose existing investments, but at the same time move to a modern cloud-native architecture, it is necessary to find new approaches to extending the existing application without adding additional, or at least minimal, code to the monolith.

These elements are definitely worth taking into consideration when balancing investing in different areas of the application; however, there could be a more efficient model. Rather than investing in re-architecting, the focus could be in extending the application. It wouldn't be in the traditional sense — by adding features within the existing code base; but rather by creating new services decoupled from the monolith.

The services being created as a result of the embracer pattern acts as a service oriented service layer encapsulating the monolith by exposing a new API toward new external consumers of the services offered by the monolith. The embracer services are fine-grained access to specific functions within the application — and also where new features should be implemented. 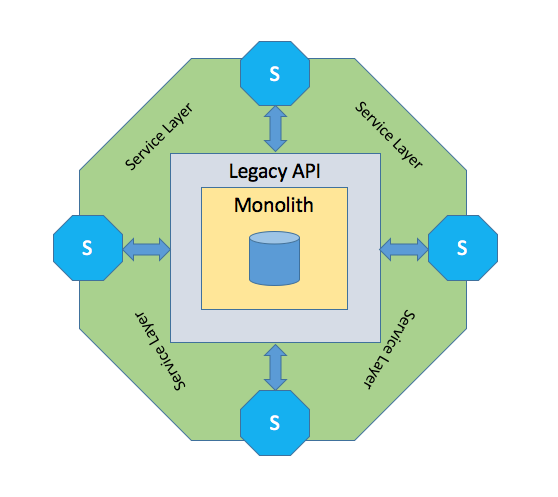 Generally, monolithic applications work by means of users executing a number of tasks manually through a user interface. User interaction will, over time, become very repetitive in nature — as most users tend to do the same tasks over and over again. Some applications provide macro-like functionality for capturing and repeating those interactions, eventually by showing entry screens when input is required. A well-known approach to this is VBA for applications from Microsoft — where one can write small applications that run within a host application, offering some level of automation. This being said, the users will still need to interact with the software using a graphical user interface.

In using a combination of the embracer and functional aggregator patterns, software vendors can efficiently transition to a cloud-enabled architecture while retaining the investment that, over time, has gone into constructing the original application. The combo also provides a new functional service layer, offering access to the functionality — within the monolith — at a higher level. 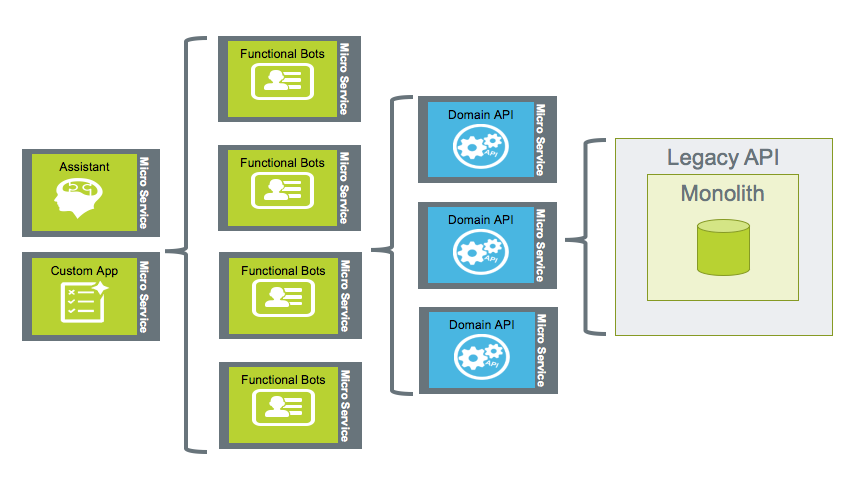 The new functional service layer functions as the glue between the digital assistants — like Cortana and Wanda — to provide a conversational user experience. An additional benefit facilitated by the patterns is the ability to provide a functional reach API for developing custom applications.