this week i had the pleasure of attending seb lee-delisle's creative html5 and javascript workshop and even as someone who classes themselves as an expert javascripter (i hope!), i still learnt tons.

to me, seb has gone through it all when he was developing for flash years ago. things like building 3d in a 2d environment, optimising methods and getting to know the faking techniques and tricks to make something appear awesome without turning your computer in to a smouldering wreck after the cpu melted the thing to the ground!

in my humble opinion, the "open web" community are now going through the same process with canvas and other html5-esque technologies. so why not learn from what seb and others have already been through? this is why i wanted to attend seb's workshop, and if he runs it again, i'd recommend you do the same if you're not familiar with visual programming techniques.

by the end of day one we had all the components to build a working asteroids game. which i glued together that evening by myself (note that most of these components are seb's with a few of my own tweaks and glueing) - full screen/ipad version also working online

the second day we upgraded from 2d to 3d and to close the day, we asked seb to build a 3d version of asteroids. clearly he wasn't going to completely finish developing the game, but it was fun (and impressive) to see the building blocks being put together. he got to the point where there we asteroids flying towards him, the ship was controlled by the mouse and had some eased effects to give it a more tactile feel, and he had bullets/laser beams firing at the asteroids - all very cool, and not far off a ready game: 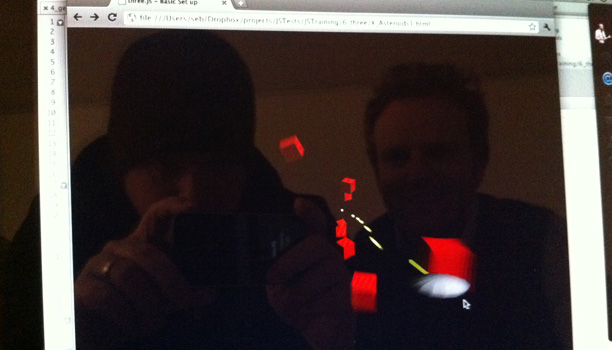 notes from the day

by way of brain dump, and so that i've got a record of the stuff i need to remember somewhere , here's just list of bits that i picked up throughout the day. obviously there was tons more, but when you're coding, listening, learning and wrapping your head around trig (something that i'm quite useless at) - less notes are taken

for an animation the (pseudo) code looks like this:


to get the z-order correct (painters algorithm), you need to sort by the z axis, where points is an array of objects with xyz:

to get a circular distribution, rotate around a circle using: